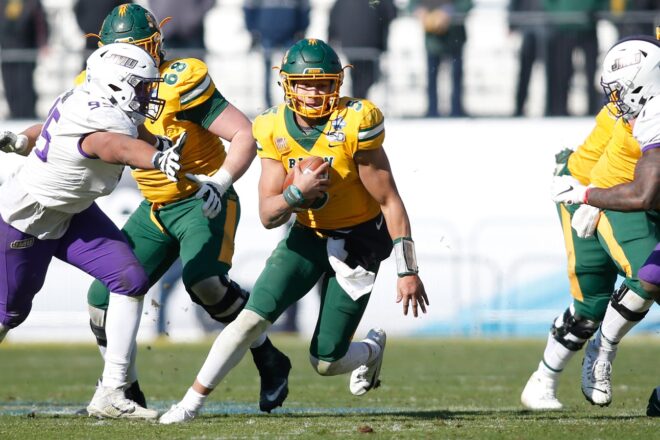 Let’s look at the news around the league about the upcoming draft.

From the moment of the trade, the rumors came out that the 49’ers were taking Alabama QB, Mac Jones.  The media were pounding this theory for weeks.  Now that we are days away, we are hearing that SF’s decision is down to Mac Jones or Trey Lance.  According to ESPN’s Dan Graziano, SF’s 1st selection has been leaked every year under GM John Lynch.  This might be a great smokescreen or they are testing what the 49’ers fans prefer.

Pitts is a superior athlete, no question.  What Kyle Pitts is not, is a TE.  He is a big WR with no inline blocking skills of a traditional NFL TE.  They refer to this position is called a Move TE.  Aaron Hernandez started this new position.  What Florida did was create mismatches with Pitts overwhelming LBs trying to cover him.  Pitts will do some of that in the Pros but not to the extent he did in college.  Atlanta is rumored to be interested in selecting him if they can’t trade out of the position.

Patriots Inquiring about Picks in the Top Ten

The Patriots are doing their due diligence about moving up into the top ten.   Some are speculating this is to select Justin Fields.  I think they are just gauging what it would take to move up for any player they may like, such as a Defensive player.  They traded back in 2008 from 7 to 10 to select Jerod Mayo.  This is just one of many draft scenarios to watch.

Rumor has it that the Eagle s have fallen in love with Michigan DE Kwitty Paye.

That’s today’s rumor out of Sin City.  Why are they waiting until Draft Week to make this move?  Peter King thinks it will be a trade for the underperforming/overpriced Nassib.  I can see where his price tag ($7.5M in 2020) may scare teams away and the Raiders will have no choice but to cut him.

This sounds a little like the Rob Gronkowski situation when the Patriots took him in the 22nd round.  Gronkowski also missed his entire junior season due to back surgery.  When he declared for the draft after his Junior year, it was quite the quandary for NFL GMs.  Farley’s situation is very similar.  Farley had the surgery in March and it’s the second season in a row he has had back surgery.  Farley also had ACL surgery in 2017.  I don’t have him going in the 1st round because of the injury history.

Noise coming out of Denver suggests a trade for Carolina QB Teddy Bridgewater.  Ye cost would only be a mid-round draft pick.

Dolphins may shake up the Draft with OT selection at #6

The word from South Florida is that the Phins are moving RT Robert Hunt to Guard.  This leaves the possibility they will draft OT Penni Sewell.  This would only happen if the Bengals pass on Sewell and take Joe Burrows LSU teammate J’Marr Chase.  I believe Chase has been Miami’s target ever since they made the trades.    Also don’t be surprised if Miami trades out of this slot to a team hungry for a QB, thus blocking the Patriots from getting a QB.

I had been predicting the three second-tier QBs (Kyle Trask, Kellen Mond, and Davis Mills) will be gone by pick 75.  I saw a report today that says they all could be selected by pick 64!

All my articles this month have been sponsored by The Draft Network.  https://thedraftnetwork.com

They are sponsoring the Draft Contest with a prize of a one-year subscription.