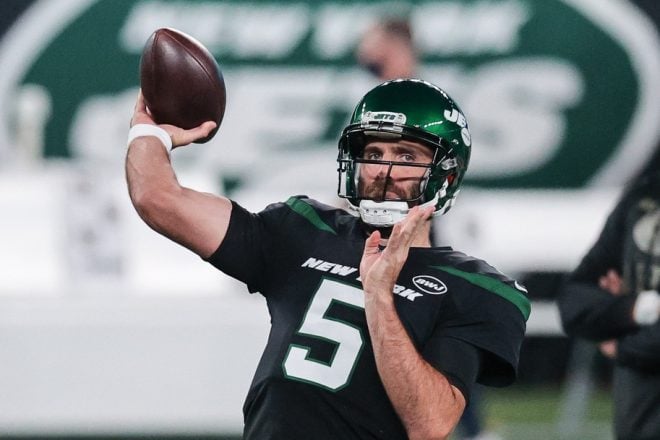 Quarterback Joe Flacco went from being a franchise guy to quickly becoming a journeyman player, and that journey appears to include a stop in Philadelphia.

According to ProFootballTalk.com, Flacco is scheduled to make a visit with the Eagles this week as he continues looking for a new team. Philadelphia currently has Jalen Hurts as their starter and are in need of building depth after having dealt Carson Wentz to the Colts this offseason, so Flacco’s addition may make sense.

For Flacco, a deal with the Eagles would keep him close to where he grew up and where he still has family. The veteran was born and went to High School in Audubon, New Jersey, which is about 20-minutes away from Philadelphia. It also seems like a good fit since Flacco would be in a similar role to what he was last year with the Jets, which saw him play behind Sam Darnold until the quarterback was sidelined with a shoulder injury.

Flacco is also reportedly receiving interest from San Francisco, who is looking for a veteran that can step in if Jimmy Garoppolo goes down again in 2021. After seeing the crop of free-agent quarterbacks dry up, Flacco is thought to be a good fit out there and it’s possible that could be an option if things don’t work out with the Eagles. Head coach Kyle Shanahan has a high-regard for Flacco and his addition, especially at his age and price tag, would still allow for the club to draft a younger player to develop.

However, with most of his family being on the East Coast, it’s possible that staying closer to home could be his preference. But it’s clear he’s not done with the game just yet, and now it’s just a matter of where he’ll land as he looks to continue his NFL career.