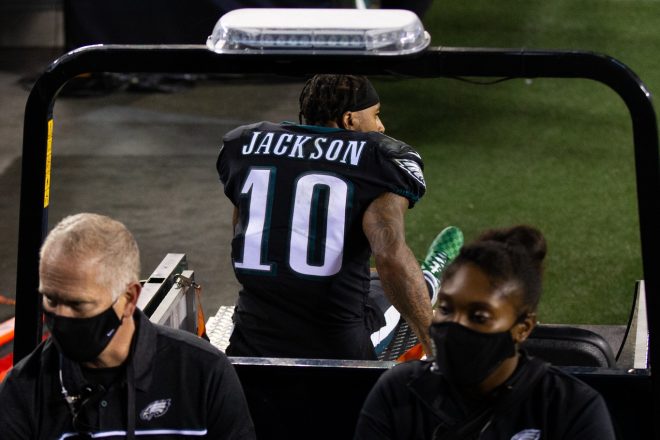 Changes appear to be continuing in Philadelphia, with the Eagles getting ready to part ways with another offensive player.

Source tells me that DeSean Jackson will be released by Eagles pic.twitter.com/tz002XrQQV

Jackson hasn’t exactly been reliable with the Eagles, playing in just three games in 2019 and then just five games in 2020. In fact, the last time he played a full season was all the way back in 2013. Since then, the closest he’s come was when he played in 15 in Washington in 2016. From there, he played in 14 and 12 over the next two seasons with the Buccaneers.

The veteran receiver was originally traded to Philadelphia from the Buccaneers in 2019, sending Jackson and a 2020 seventh-round pick to the Eagles in exchange for a sixth-round pick.

No one thought much of the move at the time, but for the Bucs, that selection worked out because that pick turned into Scotty Miller.

Miller played in 16 games during the Buccaneers championship season, catching 33 receptions for 501-yards and 3 touchdowns.

The move isn’t a complete surprise. Jackson hinted at this possibility recently on his Instagram page where he wrote, “Looking forward to my next chapter” as well as “The best Deep threat in NFL history!! Coming to a city near you!!”