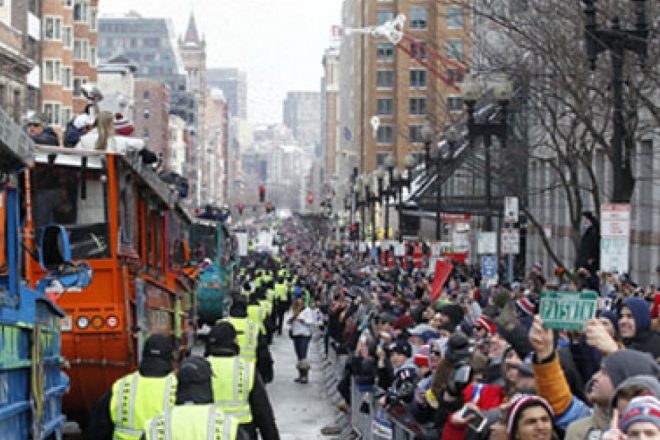 On February 6th 2002, the New England Patriots celebrated their first Super Bowl championship in what became the first of 12 duck boat parades for Boston’s professional sports teams over the next 20 years.

Over his Instagram account Friday, former cornerback and Pro Football Hall of Famer Ty Law shared some classic news footage from that day as he joined Troy Brown, Tom Brady, Robert Kraft, and even Bill Belichick on stage at Boston’s City Hall Plaza as they all broke out some  celebratory dance moves at the post-parade rally

“Then vs Now. Get it in champ, you deserve to go hard”, Law wrote in a post featuring memorable moments from Brady’s first and seventh championship parades.

You can view the full “dance off” in the clip below.

Who says the Patriots never had any fun at their parades?

By: Robert Alvarez
Check out all the best social media sights and sounds from the first day of Patriots Training Camp.
5 days ago

By: Robert Alvarez
The Patriots reveal specific dates and times for the first week of public training camp sessions at Gillette Stadium as fans return.
6 days ago
wpDiscuz