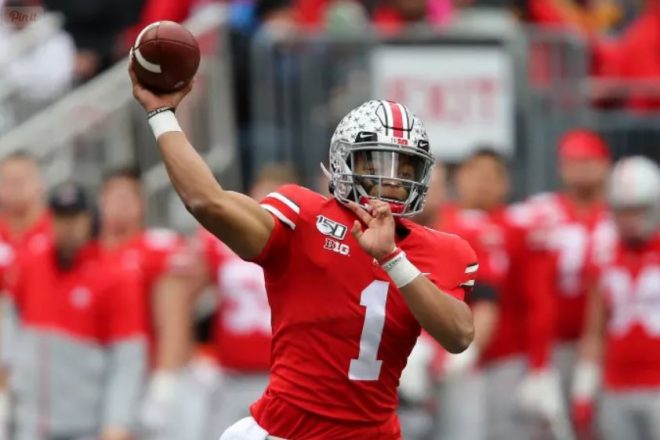 We thought the Patriots would sign a veteran (Ryan Fitzpatrick, to me, is a great fit, although we’ve been hearing rumors of Mariota), and then draft a young gun. That’s still our thoughts. So…who will the Patriots draft?

Justin Fields, Ohio State could be “the guy” if he’s still there at #15 (we don’t believe so, but more to that below). So, forget for now the “what-ifs” and let’s look at the player.

Fields fits the mold for the modern-NFL quarterback that can run, throw from the pocket or on the move. He’s 6’3, 228 pounds of solid muscle that makes him hard to bring down in the pocket with the athleticism to escape the pass rush and make plays on the move.

He began his college career at Georgia, and after playing behind Jake Fromm as a freshman, transferred to Ohio State, his past two seasons, 2019 and a shortened 2020 that ended up with Ohio State in the National Championship Game against Alabama were outstanding. In 22 games for the Buckeyes, he completed 396 of 579 passes, which was 68.4 percent for 5373 yards with 63 TDs, just 9 interceptions for a passer rating of 179.1. He rushed 218 times for 867 yards with 15 more TDs.

Fields has among the best arm strength’s of anyone in the class, and the accuracy to make throws in all three areas of the field. And he throws a very accurate deep ball. He started off the shortened 2020 season on fire, but down the stretch, he struggled. In his final three games, Fields only completed 58 percent of his passes with four TDs and five INTs.

But in the college semifinal playoffs against Clemson, Fields regained his sharpness, completing 22 passes on 28 attempts, for 385 yards, six TDs, and one interception. He also ran the ball for 42 yards on eight attempts.

He has struggled with some of his reads and recognizing pressure and at times, has too much trust in his arm and the ability to throw in tight windows. His throwing motion could tighten up a bit, although that is relatively minor. But with having his arm strength, athleticism, and clutch play ability,  the ceiling is very high for Fields.

We had Fields long gone by the time the Patriots pick at #15. However, NFL Draft analyst Lance Zierlein said in a recent mock draft that he believes Fields will drop all the way to the Patriots at #15, and that has set many tongues wagging around New England, thinking about the possibilities…

“It’s hard to project where the QBs will land this year, as I expect grades to vary greatly by team. But Fields is a talented quarterback with big-game experience who will have a chance to compete for snaps immediately in New England.”

– Has struggled with his reads and recognizing pressure

– Throwing motion can be a bit long

Fields (if he’s there at 15) will challenge right away to be the franchise QB.

Yes, he will be expected to make the offense his and become a team leader

None, Newton is a free agent and he’ll leapfrog Stidham on Day 1

Conclusion:
Fields is an outstanding prospect and has all of the tools to be an excellent franchise quarterback in the NFL. However, he’s not a finished product and has some things to work on, speeding up his clock for the NFL game, and making his reads quicker.

But when he gets the ball and throws on rhythm, he’s got some incredible talent. He’s produced some incredible production in Ohio State’s spread system. He’s dynamic with the ball in his hands as a runner and can easily run away from defenders.

Draft analyst for NFL.com Daniel Jeremiah had this to say:

“Fields has a lot to work with at the position. He can make every throw and he’s an incredible athlete. Fields has a full skill set. In the passing game, he’s at his best when he’s on time and in rhythm. He shows the ability to deliver the ball with anticipation and accuracy on drive throws down the field. He throws from a 3/4 arm slot, and the ball has plenty of life/velocity. He is accurate on the move to both his right and left. He has a good feel in the run/pass-option game. He also has the athleticism to extend plays and create.”

“I see a lot of similarities to Dak Prescott when he was coming out of Mississippi State. Both play the position with physicality and toughness that I admire. Dak was similarly effective in the QB run game, and they both possess the playmaking skills to bail out a bad play call.”

On the Rich Eisen Show, Jeremiah said that the Semifinal game against Clemson was the best he’s ever seen him play and talked about his toughness

Fields has the size, physicality, athleticism, and arm strength to be the “next guy” for the Patriots. However, as much as I like to read with Zierlein writes, with no disrespect intended, I would doubt he’s still there at #15. However, if he was… the Patriots would be crazy not to take a long, long look at him.