2 years ago at 10:04 am ET
Follow @IanLogue
Posted Under: NFL Rumors 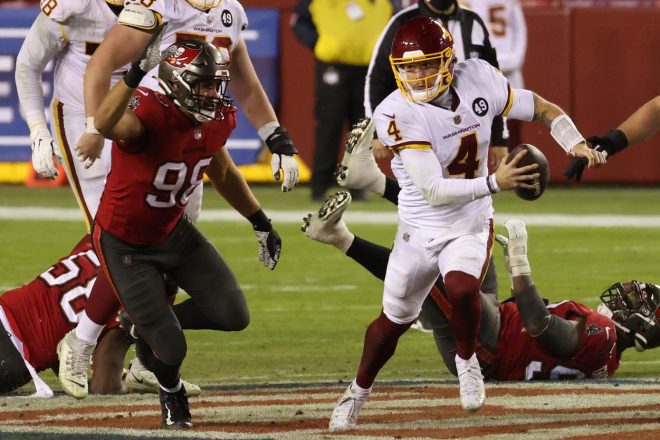 With the QB carousel spinning fairly quickly this offseason, it appears one potential player who could have drawn interest has been locked up for the foreseeable future.

According to Ian Rapoport, Washington has agreed to terms on a 2-year extension for quarterback Taylor Heinicke, who stepped up in a big way for them during their postseason match-up against Tampa Bay in the Wild Card round.

Heinicke played well in that game, completing 26-of-44 for 306-yards along with a touchdown and one interception.

He finished 10-of-18 for 130-yards with an interception in the first half as the Buccaneers built an 18-7 lead, but he was 16-of-26 for 176-yards and a touchdown in the second half and kept them in the game.  Washington was down by just one possession trailing 31-23 with 2:49 left to go in the contest, with Heinicke completing passes of 16 and 10 yards to get them out to midfield.  Unfortunately, a loss of 11-yards on a 3rd-down sack set up a 4th-and-21 where Heinicke was forced to throw up a prayer to tight end Logan Thomas that went incomplete.

After the game, Buccaneers quarterback and former teammate, Tom Brady, gave him some words of encouragement.

“He just told me I played a hell of a game, showed a lot of grit out there,” Heinicke said via Peter King. “And just to keep working.”

“Again, for that to come from him, it’s pretty neat,” he said. “Not a lot of people get to experience that.”

If nothing else, that performance earned him both respect and a raise, with his deal is reportedly worth $8.75 million, plus incentives.

The former undrafted free agent originally signed with the Vikings but was a member of the Patriots after being signed to their practice squad back in September of 2017.  He was here less than three weeks before eventually being released.

He was set to be a free agent this offseason and was expected to potentially draw interest around the league after that showing, but Washington locked him up as Alex Smith’s future remains in question following his late-season injury, with Kyle Allen also recovering from a season-ending injury.   The team previously released former first-round pick, Dwayne Haskins, at the end of December.

This news now puts him in a good position with a chance to compete for a starting role in Washington next season.