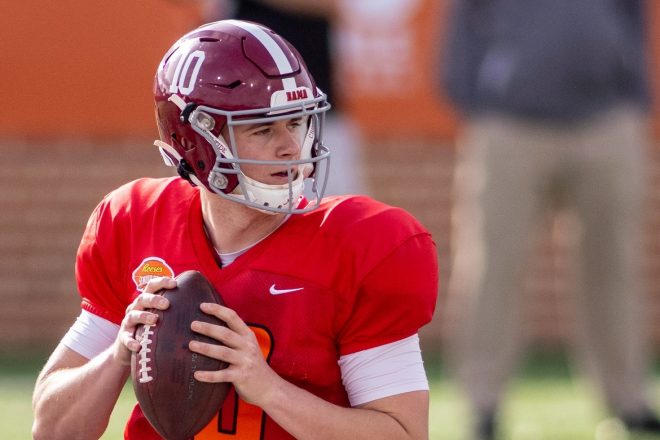 With the Patriots still pondering their quarterback options this offseason, it sounds like they’ve already done some due diligence on one prospect in the upcoming draft.

Alabama quarterback Mac Jones is getting ready for the upcoming Senior Bowl and during a session with reporters on Thursday revealed that the Patriots were a team he spoke with Wednesday night.

“Yeah, we met the scouts, I guess, last night,” said Jones.  “I sat down at their table.  Other than that, we just had a good conversation, you know, talked and they got to know me really well.  I really liked their table.  It’s kind of fun to see how different tables are…they act a little different, but the Patriots were really cool and asked some really good questions.”

However, one person who wasn’t there asking those questions was Bill Belichick, who is reportedly not in Mobile, Alabama for this week with his staff as they look at prospects.

According to coach Matt Rhule, Jones has already been showing his leadership this week, with Rhule calling him an “alpha” and also pointing out that “He makes really quick decisions,” along with “He processes information quickly, highly intelligent.”

Jones reportedly suffered an injury Thursday after rolling his ankle and it appears he may not be able to go this weekend.  The 6’3″Alabama standout said that unless he’s 100%, he won’t play.  “It’s not fair to my teammates to not be 100 percent and try and play and not play well,” said Jones. “I’m going to make the decision.”

He’s certainly coming off of an impressive season.  Alabama went undefeated on their way to a National Championship, with Jones throwing 41 touchdowns and just 4 interceptions as well as finishing with an unbelievable 77.7% completion percentage on the season.  That saw him eclipse the previous NCAA record of 76.7%, which was set by former Texas QB Colt McCoy back in 2008.

Could he end up on New England’s radar?  ESPN’s Mel Kiper already has him going to the Patriots at #15 in his latest mock draft.  We know the high regard Bill Belichick holds Alabama head coach Nick Saban, so it wouldn’t exactly be a surprise.  For now, this one can simply be chalked up to a team exploring all of their options as they continue looking to upgrade the QB position heading into 2021.

I wouldn’t have thought this a month ago, but unless the Patriots are planning to move up, they won’t need to ponder drafting Mac Jones.
He’ll be gone by 15.