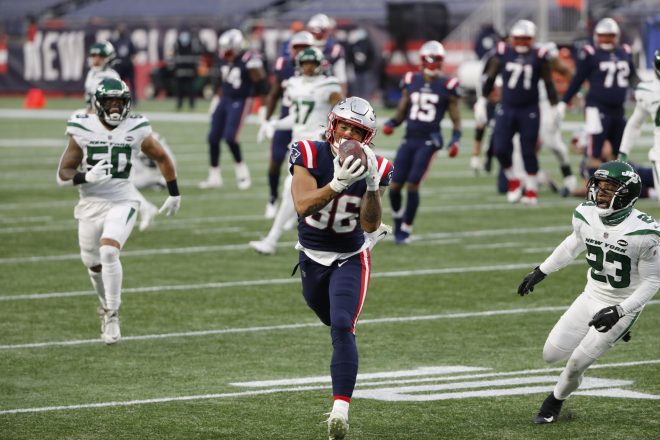 The Patriots 2020 season is over, and it was far from what we’ve all become accustomed to around these parts, but for a while this spring/summer there were times when we weren’t even sure we’d have a season. And for that regardless of the outcome, we should all be grateful

The Patriots had a nice comeback win in the second half over the Jets and the good part about that is the fact that they did it with a lot of their younger guys. Reading into it too much and pointing to the needle pointing up for 2021 is a bit farfetched, however.

But regardless of their struggles this year, the team played hard, there was no finger-pointing, and the games were intriguing to watch as they were forced to make big changes. Even more changes are coming next year… but first.

If this was Cam Newton’s swan song, and he indeed is moving on as Adam Schefter has reported, then he most definitely saved his best for last. Coming into Sunday’s game with just five TD passes, Newton threw three TDs to three different receivers and his QB rating of 127.4 was his best of the season.  He completed 21-30 passes for 242 yards and 3 TDs.

He had his longest run of the season, a 49-yard scamper on the Patriots’ first drive of the game. He ended up leading all rushers with 79 yards. He set two Patriots’ records on Sunday, the 49-yarder was the longest Patriots run ever by a QB and he also set a new record for the team by most rushing yards by a QB.

He even caught a touchdown on a pretty pass from Jakobi Meyers, a 19-yard touchdown reception. And he yet he still had some of those groan-inducing throws with terrible mechanics and looked even worse, but on Sunday he shined.

The running game was led by Newton and Sony Michel, while it wasn’t Sony’s best on the ground, it was undoubtedly a very good one. Michel ran hard gaining 76 yards on 16 carries but it was in the passing game that Michel turned some heads.  Sony gained 60 yards on three receptions, including a really nice 31-yard touchdown catch from Newton, his first TD reception in his career.

James White chipped in with four catches for 31 yards including his first TD catch of the season, a 7-yarder from Newton for the Patriots’ first touchdown of the game. But he was beaten for a sack in pass protection and had several of those misses down the stretch, which is a rarity for him.

Jakobi Meyers had another very solid day, and while we said at the outset that you can’t read much into 2021 from Sunday, in Meyers’ case, he’s been proving it all season. He consistently finds ways to get open, and in the case of that 3rd and 19, he made the catch and moved the sticks. It wasn’t an earth-shattering day, six catches for 68 yards, but like Meyers himself, he seemed like he had even more. Meyers produced at a pace during his last 10-11 games that would translate into a 1000-yard season.

The pass to Newton was a beauty and that touchdown was a huge turning point. Other than Meyers, there wasn’t a whole heckuva lot of production from Damiere Byrd and N’Keal Harry.

The Patriots actually got production from the tight end position, and while it wasn’t off the charts, it was good enough and long overdue. Devin Asiasi finally caught his first pass of the season, a nice diving grab, and later added his first touchdown grab, where he went down the seam and the Jets had a breakdown where he was uncovered, but the time the free safety reacted it was too late and he had himself a touchdown…

The offensive line once again did a good job of opening holes for the backs to run and the team averaged 5.7 yards per carry. The running game opened up the passing game and the pass protection was good, despite the three sacks allowed. One of those was Newton holding on to the ball too long and another was a rare whiff by James White. The young guys (Justin Herron, Michael Onwenu),  stepping in have played very well

The defensive line had a pretty good game, considering the Jets were on their third running back, the fact that they weren’t able to dictate in the running game was a win for the Patriots. Especially considering the way the run defense had been playing.

Lawrence Guy, Adam Butler, and Deatrich Wise all were good on Sunday, getting good production. Like Newton, one has to wonder if any of the three are playing elsewhere in 2021.

Chase Winovich had a big game getting after Jets QB Sam Darnold, and in this type of game, plays to Winovich’s strengths. He ended up with 2 sacks, 3 QB hits, and a deflected pass along with six tackles.  Winovich played in 90 percent of the snaps on defense, while Ja’Whaun Bentley played 84 percent of them.

John Simon’s snaps were cut down some as he and Winovich continue to have issues setting the edge. Rashod Berry and Shalique Calhoun played about a dozen snaps each.

The Patriots’ secondary had an up and down day, J.C. Jackson got burned on a 53-yard catch by Breshad Perriman, while Myles Bryant had an awful sequence where he dropped an interception and then was flagged for a personal foul penalty. But he also got some looks at safety and that kind of versatility is always prized in Foxboro. Joejuan Williams also saw an uptick in playing time.

But they also were in the position to get two interceptions, and those loomed large in the big scheme of things. The Patriots were 1-9 when losing the turnover battle and 5-0 when they didn’t. J.C. Jackson got his ninth INT of the season when Darnold overthrew his receiver, but being in the right place is important. Jonathan Jones made a nice play on an interception in the end zone.

Another bright spot was rookie Kyle Dugger, once Adrian Phillips went down with an injury, Dugger stepped into his role and was making plays. He still has some work to do, but overall, stepping from Div. 2 college into the NFL has been an impressive one.

Jake Bailey had another big game putting three punts at the 10-yard line or closer but nearly had another two but they bounded into the end zone. Bailey has arguably been the Patriots’ best player all season. Penalties hurt the unit, while the kick return unit only averaged 18 yards per return, Gunner Olszewski averaged 12 yards per punt return, including a nice 17-yard return.  Once the team took away the primary kick return role from him and made him the primary punt returner, he’s been excellent, and ended up averaging 17.3 yards per return. The coverage on the kick returns was very good., but didn’t get any punt return yardage thanks to Bailey’s punting.

The Patriots coaching staff had the team motivated and ready to go. Granted it was the two-win Jets, but the team, although very short-handed due to injuries were prepared with a good game plan and the team executed it well.

Josh McDaniels made a great play call on the pass to Newton and getting the rookie tight ends involved in the passing game was a well-needed boost. And in the red zone, the team was 2-2, an area that has been a thorn in their side.