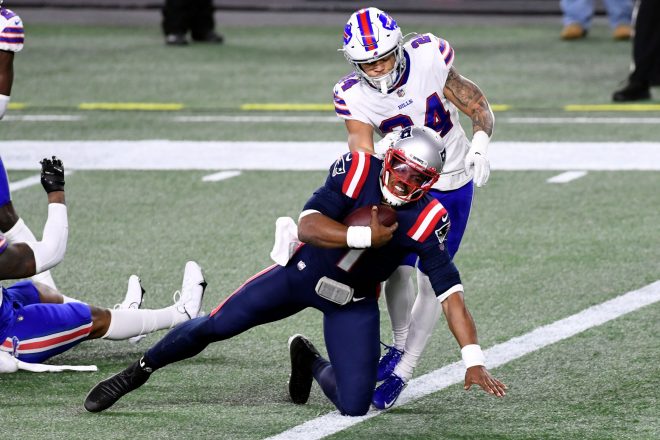 SOCIAL DISTANCING FROM HOME — Go listen to the song Coward Of The County by Kenny Rogers, and that will help explain things.

For so many years, the Buffalo Bills have been beaten up by the Patriots.  On Monday night at Gillette Stadium, the Bills were Tommy and the Patriots were the Gatlin Boys.

The Bills locked the door, took on the Patriots, and they let ‘em have it all.

Twenty years of crawling…was bottled up inside him…

It’s more like twenty-five years.  But the Bills, proudly adorning their crown as 2020 AFC East Champions, a crown they have not worn sincer 1995, throttled the Patriots, 38-9.  The game was slightly close in the second quarter when the Bills dropped three touchdowns on the Patriots to make the end result a foregone conclusion.  The Bills sent a message to the entire conference with the win, although the Kansas City Chiefs likely aren’t listening.

If the truth be known, the Bills sent a loud and clear message to the Patriots.  This is no longer your division.  This is our division.  Buffalo will need to send another message to Miami next week about divisional superiority.  There is no question that right now, right this very moment, Buffalo is the class of the AFC East.

They certainly are better than the Patriots.  This is why we reference the Rogers song from 40 years ago.  Buffalo had been beaten down consistently by the Patriots over the years.  Now in 2020, the Bills sweep the Patriots, the first time a Bill Belichick-coached Patriot team has lost twice in a season to the same opponent since 2000.

The Patriots fall to 7-9, ensuring the first losing season since that same 2000 season, Belichick’s first as Patriot head coach.  Questions will continue to come up regarding Belichick no longer having Tom Brady, and was it Brady or Belichick that was either the chicken or the egg.  Brady’s Buccaneers are 10-5 and heading for a playoff appearance.

Cam Newton once again showed that he is not the quarterback of the future for the Patriots.  This was underscored by the fact that on Jarrett Stidham’s fourth (and final) completion of the night in the fourth quarter, a 10-yard dump pass to James White, gave Stidham more passing yards than Newton.  Newton finished 5 of 10 passing for 34 yards and a 57.9 rating.  Newton scored the only Patriot touchdown of the evening, a 9-yard run in the second quarter which would have tied the game had Nick Folk made the extra point.

That touchdown by Newton was his 12th rushing touchdown of the season.  That ties him with Steve Grogan for the most by a quarterback in team history.  At the time, Grogan’s record was also an NFL record.  In 2011, that record fell to a Carolina Panthers quarterback named Cam Newton (14 that season).  It further underscores what little scoring options this Patriot team has at the moment.

Unlike the last few weeks, the Bills beat the Patriots through the air and not the ground.  Josh Allen is no longer a laughing stock, as he is elevating to the top pantheon of NFL quarterbacks.  He is getting up there and quickly.  The former Wyoming quarterback from central California is looking like a quarterback no team wants to face in the postseason.

Allen finished 27 of 36 passing for 320 yards, four touchdowns and a rating of 138.7.  Stefon Diggs, without the injured Stephon Gilmore to worry about, cut loose for 145 yards on nine carries and three touchdowns.  Second string tight end Lee Smith had the other touchdown catch.  Zack Moss had 57 yards on 12 carries and a touchdown to lead the rushing attack; this is interesting in that Devin Singletary is usually the lead back for Buffalo.

Buffalo did not punt until the third quarter.  Actually, they lined up for a punt in the first quarter, but the ball was snapped to Jaquan Johnson, who lobbed a perfect right sideline pass to Siran Neal for 13 yards and a first down.  The Bills cashed in on the second play of the second quarter with a five-yard touchdown run by Moss.

The Patriots at times looked beaten down and dispirited.  They were mostly in zone defense packages and didn’t show a lot of zeal in playing the Buffalo receivers tight, especially after falling further and further behind.  Diggs did catch a 50-yard touchdown pass in the second quarter on a little slant route which J.C. Jackson misplayed and wound up in pursuit of Diggs instead of in front of him.

The Patriots finish the season at home next weekend against the 2-13 Jets.  If the Patriots lose, and all other 6-9 teams win, the Patriots could wind up with the tenth pick in next year’s draft.  Right now the Patriots would select 14th.  For Belichick to hand the game to the Jets just to try and improve a draft position , that would be a ludicrous thought.  Still, if Belichick has an eye to the future and if moving up in the draft seems that advantageous, you never know.  But Belichick has too much hatred for the Jets to make that postulation plausible.

The Bills Mafia can whoop it up.  They have more than earned the right to do so.  It’s only too bad that any home playoff game the Bills host will have no fans there.  Sooner or later, you become Tommy when you’re looking to kick the butts of the Gatlin Boys.  The Bills took it to the Patriots hard, and look ready for the postseason.

The Patriots look like champs of yesterday.  One more game, and then let the offseason speculation begin.

READ NEXT:
Observations as the Bills Sweep Patriots Aside in 38-9 MNF Blowout
Posted Under: 2020 Patriots Season