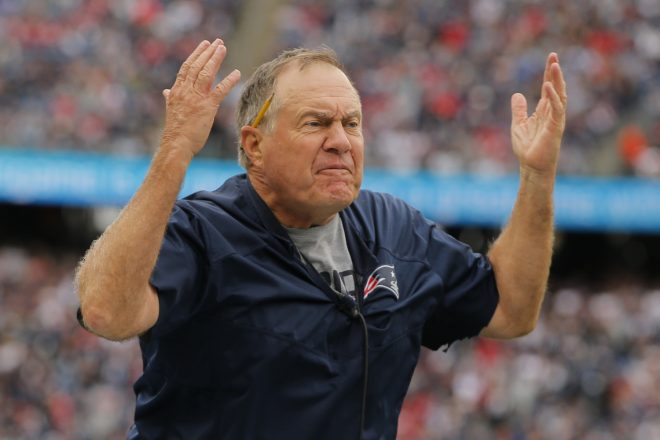 A 29-point defeat to Buffalo became the Patriots worst home loss under head coach Bill Belichick since his trade to the franchise in 2000.

To make matters worse, the Bills win also marked the first time they have swept the Patriots in the regular season during Belichick’s 21 years coaching the team.

Belichick’s frustration with the season reached a new peak early in the third quarter following a questionable challenge of a completed catch by Bills tight end Dawson Knox on Buffalo’s first drive. At first glance on television replays, it appeared pretty clearly that Knox got both feet down with possession. Despite that, Belichick still tossed his red flag anyway and wound up losing the challenge.

The Bills would go onto to score and take a 31-9 lead when quarterback Josh Allen found wide receiver Stephon Diggs for his second of three touchdown receptions on the night.

Soon after the catch was confirmed, ESPN cameras caught Belichick immediately tossing a sideline phone in disgust, summing up the disappointing season in one moment.

Bill Belichick has had ENOUGH.

“Whoever suggested to Coach Belichick that he might want to challenge that got an earful,” said Steve Levy on the ESPN broadcast.

After the game, Belichick briefly discussed the decision to challenge, but avoided commenting on his reaction. He did however appear to indicate he wasn’t in full agreement with his coaching staff.

“I mean, it was a good call [by the officials],” Belichick said. “It was a good catch. The challenge was obviously not successful, as it shouldn’t have been, so…”

The phone toss instantly became a memorable .gif/meme, and Twitter users joked accordingly over the remainder of the night.

Belichick's phone throw will be a GIF I will use roughly 8,000 times.

Bill moments after being informed that his likeness was used in a “Love Actually” digital parody https://t.co/FVMDIs2Ncz

when your college starts asking for money three months after graduating pic.twitter.com/tyn7OoT5T2

"All of our agents are busy assisting other customers. Your call is important to us. Please hold, and your call will be answered in the order in which it was received." https://t.co/lNRB7tNRwn

"Why don't you just TELL me the movie you want to see?" pic.twitter.com/JspOQmR6dK

“Hello we’ve been trying to reach you regarding your cars extended warranty” https://t.co/hPxjMIp9CH

By: Ian Logue
Cincinnati Bengals quarterback Joe Burrow was recently asked who the best trash talker in the league was and a member of the New England Patriots…
2 hours ago

By: Russ Goldman
In this episode, Derek and Steve take a look at some of the major changes on the offense and defense for the Patriots.
22 hours ago