For the past three weeks the New England Patriots have been without leading wide receiver Julian Edelman as he continues his rehabilitation from a procedure on his knee that placed him on injured reserve.

His quarterback, Cam Newton, shared a positive update on his health Monday, but without any specifics.

“I can confirm he’s getting better,” Newton said on WEEI’s “Greg Hill Show” Monday morning. “He’s doing well. For him to be everything that he is, and I know he may be listening or he may be having his people listen, he’s good, man.”

“Just to see him in good spirits and knowing that we’re doing our job as a team so when he comes back, it’s evident that he’ll have help at that position.”

While his official status remains unknown, Edelman is eligible to return as soon as this week and could return to practice Wednesday.

Prior to the knee procedure, Edelman struggled in five of the six games he played this season, seeing seven targets or less in all but the Seahawks game week 2.

Against Seattle, Edelman had his best performance of the year, logging eight receptions for 179 yards on 11 targets.

However in the other five games, Edelman caught just eight passes for 79 yards on 21 targets. He has zero touchdowns in 2020.

Despite the recent success without him, Newton acknowledged how much more a healthy Edelman will bring to the offense.

“We just need him to be healthy,” Newton said. “We need him to have that same speed that he’s always had, but now being a little more healthy, he’s now able to cut it loose without necessarily thinking. I think that’s all he wanted, and that’s all we wanted as a team.

In the meantime, Edelman continues to root on his teammates from a distance.  (via Instagram) 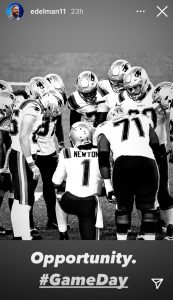 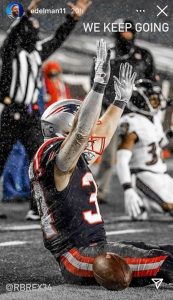 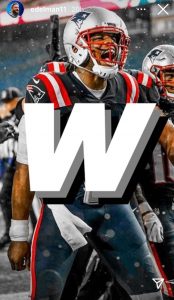 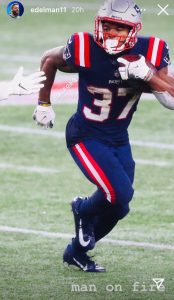 By: Steve Balestrieri
"the greatest player to play the game, it means a lot. And I think it means a lot to me, too, because this is where…
23 mins ago