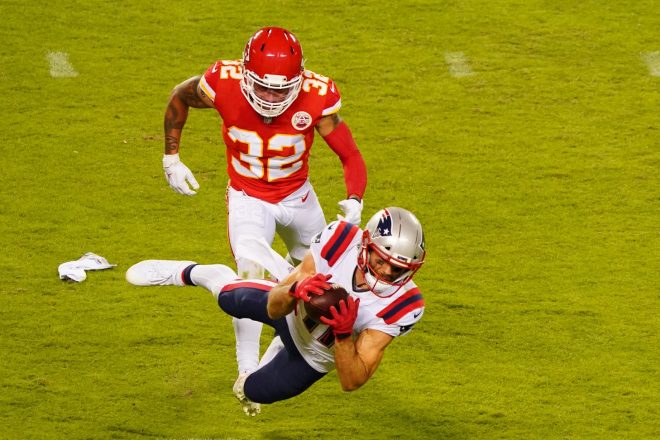 Just two weeks after having one of his best games as a professional, New England Patriots wide receiver Julian Edelman had one of his worst during the teams 26-10 defeat to the Kansas Chiefs on Monday.

Edelman hauled in just three receptions for 35 yards while dropping two targets, one of which resulted in an interception return for a touchdown during the fourth quarter.

The two drops added to Edelman’s league leading five this season on 27 targets.

Never short on ways to push himself during tough times, Edelman looked to a classic superhero film for inspiration and motivation to keep moving forward.

On Instagram Tuesday, Edelman posted a photo of himself alongside a quote by Alfred Pennyworth in the 2012 Batman film “The Dark Knight Rises”.

“Why do we fall? So we can learn to pick ourselves back up”, Edelman wrote.

“Why do we fall? So that we can learn to pick ourselves up.”

Despite the recent setback, Edelman has tallied 18 receptions for 294 yards through four games.

Edelman and the Patriots will look to bounce back against a struggling 1-3 Denver Broncos team next Sunday before their bye week.