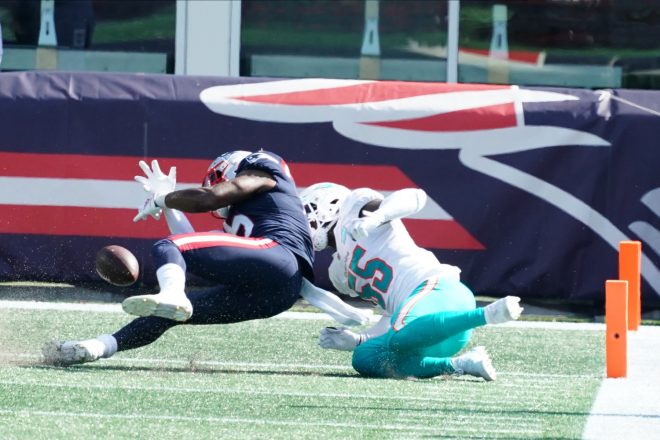 The New England Patriots may not have won on Sunday, but in some ways it may have felt like a win for at least one member of the team, wide receiver N’Keal Harry.

Just a week after dealing with more adversity following a lost fumble against the Miami Dolphins, Harry bounced back with a career day in Seattle and he can thank his quarterback for believing in him.

“You know, it’s good to have trust from our quarterback. At the end of the day, as receivers, we just want to make him as comfortable as possible,” Harry said, “and when he drops back he has faith in every single one of us that he can trust us to come down with the ball. It’s really encouraging.”

It was that faith that led to Harry’s best game as a professional on Sunday when he set career highs in receptions (8), yards (72), and targets (12), seven of which were in the fourth quarter.

Harry then reflected on how important it was to him that Newton went his way at such a pivotal point in the game.

“It means a lot. To me, it means that he trusts me in the critical situation,” said Harry. “That’s all I can ask for as a receiver. It’s my job to help him gain confidence, not only throughout the game, but throughout the season. I take a lot of pride in that.”

Through two games, Harry has already surpassed his 2019 totals with 13 receptions for 111 yards on 18 targets.

Since his signing in June, Newton remains one of Harry’s biggest supporters.

“For him to gain confidence in himself, I think that’s a start. And I think that’s what he’s doing. I think today’s game was a great indication of that and what he could potentially be. Yet through it all, he still has to keep building to become the best version of himself.”

Harry later showed his appreciation for Newton with a photo of the duo over Instagram while remaining humble moving forward.