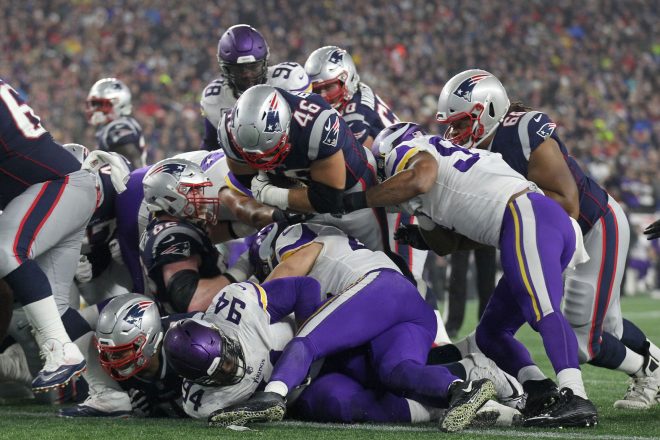 New England Patriots fullback James Develin revealed over Instagram Monday he is retiring from the NFL after ten professional seasons.

Read Develin’s full statement in the link below.

A three-time Super Bowl champion and Pro Bowl selection in 2017, Devin made a name for himself after signing with the Patriots practice squad in 2012 and worked his way to a spot as the teams starting fullback in 2012.

Before joining the Patriots, Develin played college football at Brown with later stints in the now-defunct United Football League, the AFL 2, and Cincinnati Bengals practice squad.

Develin went on to play 83 regular-season games with 31 starts over seven seasons with the Pariots. He totaled 15 rushing attempts for 26 yards and five touchdowns and caught 31 passes for 222 yards. He would also see action in some of the Patriots biggest playoff games, playing in 14 postseason contests with six starts and posted three rushing attempts for 5 yards and five receptions for 29 yards and one touchdown.

In 2019, Develin endured his first major injury since 2015 in week two that placed him on season-ending injured reserve but according to ESPN Boston’s Mike Reiss, “he remained around the team in a coaching-type capacity, traveling to road games in a rarity for those in his situation.”

“To some people, James Develin may be ‘unsung’ in terms of publicity and fame, but to his coaches and teammates he is one of the most appreciated and respected players we have ever had. In football, there are a lot of tough, unselfish and dependable people who bring positive leadership on a daily basis, but the name James Develin represents those qualities at an elite level. A tribute to the impact James had on our success, of the five seasons in which he appeared in every game, we won three championships. Any team would be fortunate to have a James Devlin-‘type’ on its roster but the reality is he is a rarity and we are very fortunate he was a Patriot.”

The ultimate teammate and a true leader on and off the football field.

Current and former teammates later chimed in over social media with congratulatory messages for Develin on a career.

I’ll never forget the way you looked at me when you tried to rip my head off… the same reason I have your back for life. What a journey brother. @jdevelin

One of the Best FullBacks in the game
Salute to a Great Career!
Enjoy Retirement! https://t.co/Oi7j72L5zg

A sampling of the messages James Develin has received from current and former Patriots teammates.

Tom Brady: “I was so lucky to share a huddle with you Jimmy!” pic.twitter.com/2vsBzCg6N0

James Develin finished one catch shy of the most career receptions from Tom Brady without catching a touchdown from him (regular season only):

All the best to James and his family on the next chapter of their lives!