Draft week is upon us…finally.

From all of us here, we hope everyone is staying safe and healthy during the recent pandemic. We know everyone is itching to get out of the house, but for now, we can read and talk about some football and at least interact with some others.

Brett Favre: Unlike Terry Bradshaw who lambasted Tom Brady for signing with the Tampa Bay Bucs, Brett Favre unsurprisingly came to Brady’s defense, and after 16 seasons with the Packers and decided not to retire, getting traded to the Jets and after one year there went to Minnesota where he closed out his career.

“Regardless of what happens, it’s his decision,” Favre said. “I commend him greatly for that decision — not necessarily for leaving but for taking that leap of faith, and you know what, I think what he’s done in New England — we may not see in our generation ever again, the dominant play that he has shown for so long and just the durability has been unbelievable.”

“I know Tom real well,” Favre said. “We talked a little bit about it but I think more than anything he just kind of wanted to try his hand at something different, and you can’t fault him for that. It has nothing to do with the organization, even though people may make it out to be a rift between he and Belichick or the organization. Look, what they did is unbelievable, and that will not change. He just wants to try his hand at something different and if it works out, great. If it doesn’t, he’s still the greatest to ever play the game.”

Draft Day Trades: Mike Reiss from ESPN, penned a very interesting column about the upcoming NFL Draft and how it is going to be conducted due to the coronavirus pandemic. Reiss wondered, “Does “Trader Bill” still exist in a virtual NFL draft?”

And it is a valid, excellent question. Belichick is widely known in the NFL as “Trader Bill” because of his well-documented forays in moving around the NFL Draft boards in the never-ending search for better value. Belichick has made 77 draft day deals in his 20 years at the helm of the Patriots.

But, as Reiss points out, with the virtual draft this year, could the slowed and complicated communications system, which could influence the draft itself, impact Belichick’s ability to make trades? It could very well happen and is one aspect of the upcoming draft that will demand closer inspection.

Let’s hope not, those were absolutely hideous, which the “color rush” monstrosities run a very close second. If they’re going to tweak the uniforms, go back to the red, white and blue unis from the 80s with the red pants for away whites. And plop Flying Elvis on the white helmets with a mini Pat the Patriot on the chest under the v-neck. But chances are they won’t

And please spare me the reds “were the uniforms of futility” crap. The Steelers were among the worst teams in pro football until Chuck Noll took over. And their uniforms never really changed.

4th & 2 Podcast – If you’ve haven’t checked out our PatsFans.com podcast, “Patriots 4th & 2” in a bit, please check it out. This week  Derek, and I discussed the defensive prospects in the NFL Draft. And we uploaded a video with Fred Kirsch, who is the Publisher and Vice President of Content, Kraft Sports Productions (which includes the New England Patriots, New England Revolution, and Gillette Stadium). Fred was the Publisher for the long-time Patriots magazine “Patriots Football Weekly” and is one of the hosts of “Patriots Unfiltered” on the team’s website.

We also conducted a video interview with Asmir Begovic, the goalkeeper in the English Premier League and a huge Patriots fan. We’ve been beating the drum for him to move to New England and double-dip with the New England Revolution as well as the Patriots as their next placekicker.

With the advent of the computer-generated draft simulator, the process of conducting a mock draft is a much easier proposition these days. Are they perfect? Hardly, no one can truly know how the teams actually rate the individual players but it is pretty darned good. And they are enjoyable, as they allow people who love the entire draft process to go about it and carry on a discussion about the selections.

With so many variables, including trades that occur, trying to accurately guess anything beyond the first few selections is really, really difficult. There are a few draft simulators that I really like, because of their ease of use, the speed at which they proceed and the overall accuracy of grading players. This year I used the “On the Clock” draft simulator which  I’ve used for several years and the Pro Football Focus Draft Simulator, which is also excellent and recommended. Both allow the user to make a trade at any time (Trader Bill).

I didn’t trade anyone although, I’ve frequently said, depending on how the board plays out, I wouldn’t be surprised to see the Patriots trade back. Plus there is a lot of real estate between picks 23 and 87, and I could see Bill trying to move into that realm as well.

However, with the number of skilled players abounding at #23, I opted not to pursue a draft. As I said, these simulators are not perfect. In the first mock, I found Kenneth Murray, LB, Oklahoma still available (which I doubt will happen) but for the sake of the exercise, we jumped all over it.

In the second one, edge rusher A.J. Epenesa from Iowa was still there at #23 (debatable) and he’s the size of the edge players that the Patriots like and fulfills a need after losing their top two pass rushers in free agency. In both, TEs Harrison Bryant and Devin Asiasi were available, and not only do both fill a need but are upgrades at what they currently possess.

Here are the two mocks, we also have three others already posted in earlier articles: 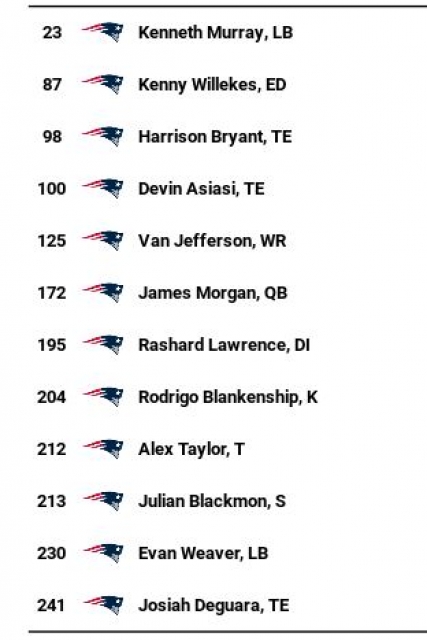 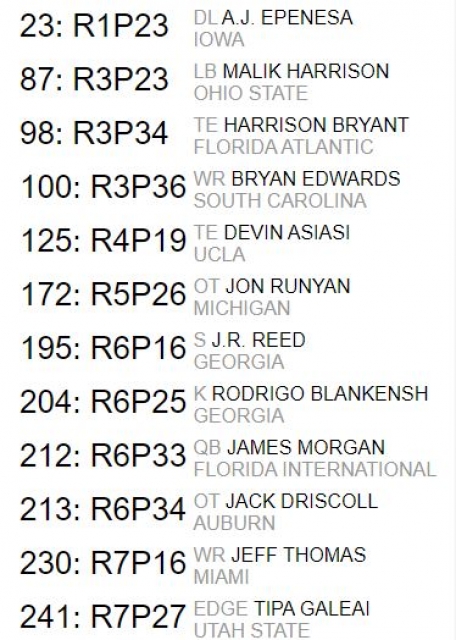 The Patriots signed restricted free agent defensive tackle Adam Butler, who had been tendered at the second-round level by the team in March, officially signed Friday, per Mike Reiss. Butler, who was a UDFA in 2017 will earn $3.26 million this year after earning $645,000 a year ago.

Butler has appeared in every game since he was signed after the 2017 draft and has eight starts. He had a career-high six sacks last year as a sub-package interior pass rusher. His signing improves the depth of the Patriots’ interior defensive line in 2020.

When looking at the upcoming 2020 NFL season, the Patriots needed to replace STs coordinator/WRs coach Joe Judge. Well with the signing of former Rams coach Jedd Fisch, he will take over the QB coach duties and Mick Lombardi who worked with the QBs last year will shift to the wide receivers.

The Buffalo Bills DE Jerry Hughes has never missed a game in his Bills career that began in 2013 when he was picked up in a trade by the team. But he was hobbled by wrist and groin injuries that each required surgery after the 2019 season.

Hughes told the Buffalo News that despite the pandemic gripping the nation, that he still has been able to go to his rehab facility four times a week and although he’s taking all precautions trying not to catch COVID-19, his rehab is right on schedule.

The Bills lost edge rusher Shaq Lawson in free agency this spring but have brought in Mario Addison. They are also rumored to looking at Michigan OLB/edge rusher Josh Uche in the upcoming draft.

The Miami Dolphins GM Chris Grier had about a half-hour predraft press conference this week and as is typical of most teams and GMs, Grier held his cards pretty close to his vest. Armed with three picks in the first round of the upcoming draft, Grier stated that the Fins still have about 8-9 guys that are on their radar who they’ll look at with the #5 pick in the draft.

Miami has three first-rounders this year and two more in the 2021 NFL Draft. “If you get it right, make the right picks and the smart picks, we have a chance to build a strong team here for a long time,” Grier said.

Pressed about that #5 pick, Grier remained non-commital. “We have an idea of who we like,” Grier said.

He added, “We feel good about eight or nine players” for that No. 5 overall pick.

Jets Supposedly in the Market for CB Logan Ryan:

The New York Jets are having internal discussions about making a run at free-agent cornerback Logan Ryan. The former Titan and Patriots had an outstanding 2019 season in Tennessee, garnering four forced fumbles, four interceptions, 4.5 sacks, 18 passes defensed, the fact that the versatile Ryan is still unemployed is somewhat of a head-scratcher at this point of the spring.

This report was according to NY Daily News reporter Manish Mehta. But with the draft upcoming this week, there will be teams that aren’t happy with their cornerback position and be looking for some talented veteran help. Ryan should get a call soon.

“I think a lot of that probably depends on your relationship with the head coach you’re calling and how well you know each other and so forth. So, with somebody like Nick (Saban), we’ve known each other for… call it 40 years. That’s a lot different than calling somebody that you’ve never met before. They may have some insight into the player and all that, but you just don’t know each other as well and there’s – I’m not saying intentional, it could be a very unintentional gap – but what they’re looking for, what you’re looking for is sometimes not always the same thing. There’s nothing wrong with that. But, again, the relationships that all of us have with people over an extended period of time where you have a lot of history of, in our case, players and their situations and their skills, you can compare them relative to other guys that we know and so forth. I think there’s just a natural level of comfort there, and certainly there is with myself towards Nick. There’s nobody I have more respect for, but I also have a great personal relationship with Nick and I value his opinion very, very highly..” Bill Belichick asked on how important it is to speak with a college player’s head or positional coach prior to the draft.

By: Robert Alvarez
Patriots Chairman and CEO Robert Kraft is honored by two organizations for his charitable and humanitarian work.
39 mins ago