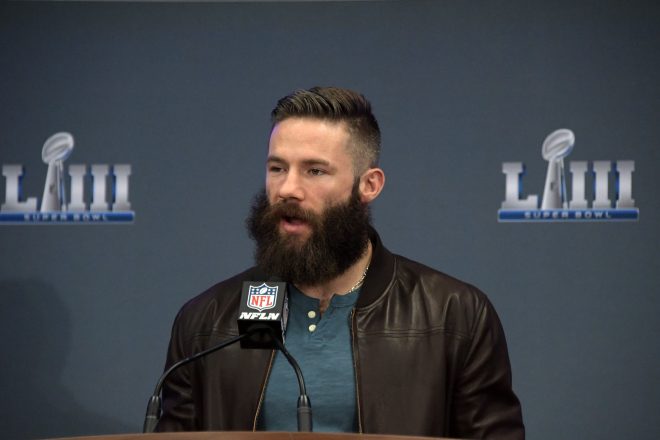 For those football fans who also love baseball, you aren’t alone during these uncertain times of silence on the diamond.

On his Instagram Wednesday, Patriots wide receiver Julian Edelman shared a photoshopped image of himself playing for the Boston Red Sox and remained optimistic a 2020 baseball season will soon begin.

An ESPN report on Tuesday indicated Major League Baseball and its players are “increasingly focused” on a plan that could allow them to start the season as early as May in Arizona.

“Pitchers and catchers May 1? Might be time dust off the oldddd mitt”, Edelman wrote alongside the posting.

You have to admit, it does look like he belongs out there.

Pitchers and catchers May 1? Might be time dust off the oldddd mitt. ⚾️

While the wait for a sports return continues let’s throw it back to better times shall we?

Here’s Edelman alongside Rob Gronkowski and Stephon Gilmore throwing out the ceremonial first pitches at Fenway Park in 2019.

During his NFL career, Edelman has made it abundantly clear how much he loves baseball as a secondary sport.

In 2019, Edelman wore customized cleats in support of the Israel Baseball Association and in 2016 showed off his hitting and fielding skills.

Julian Edelman moves around with a baseball glove pic.twitter.com/WiZaTegSvK

Despite all the fun and games, perhaps Edelman shouldn’t quit his day job anytime soon.

By: Robert Alvarez
The best social media posts and reactions to Rob Gronkowski's decision to retire from the NFL for a second time.
1 day ago