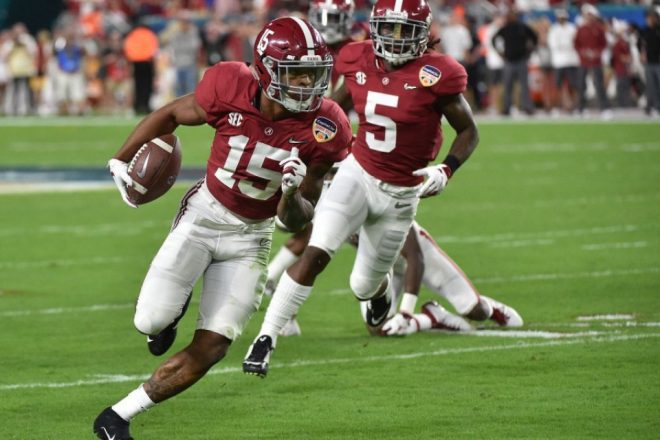 On Monday we wrote about Alabama’s Terrell Lewis, who we feel is a great fit for the Patriots in what they do and how they normally target potential linebackers in the draft process. On Tuesday, it was another linebacker Malik Harrison. Today we’re going to look at a position that needs an influx of youth, safety

Presently, the Patriots return both starters Devin McCourty and Pat Chung and they are both excellent safeties, McCourty at free safety and Chung in the box. But both are on the wrong side of 30 and despite McCourty having the best year of his career in 2019, the team needs to get younger.

The backups on the roster, Adrian Phillips (just signed, Terrence Brooks, Obi Melifonwu, and Malik Gant are all more in the box safeties than a centerfielder. The team lost Duron Harmon (“The Closer”) to the Lions and need a safety that can defend the deep part of the field in sub packages and eventually replace McCourty.

So, let’s take a look at another one of the prospects that we feel would be a good fit for the Patriots and vice versa.

Xavier McKinney from Alabama is another great prospect from Nick Saban’s Crimson Tide program. McKinney, like McCourty, has the versatility that Bill Belichick loves in his players. With the Tide, he played equally at slot, free safety and in the box and produced at each one.

He’s tough, physical and will make plays all over the field, like his predecessor Minkah Fitzpatrick. In the last two seasons, he’s had five interceptions and 20 passes broken up, forced five fumbles and had a fumble recovery.

Of the safeties entering the draft this spring, McKinney is arguably the best man-to-man coverage safety available. As a senior, he notched 95 tackles, 5.5 for a loss, 3 sacks, 3 interceptions, 8 passes broken up, and 4 forced fumbles.

– Outstanding in man coverage, can cover a lot of ground

– Very good change of direction, and burst to make up ground

– Can allow passes underneath when spying on QB

– Struggled a bit on big targets

McKinney will take over the role from Duron Harmon as the subpackage deep safety.

Yes, in Year 2 he should be pushing McCourty for the starting deep safety role

McKinney will replace Harmon who was moved to the Lions. Eventually, he’ll replace McCourty as the team’s starting free safety

Outstanding. He began his career in Alabama by working his way on the field in the kicking game.

NFL.com’s Lance Zierlein, their resident draft expert wrote about McKinney, “His coverage instincts, athleticism and quick-twitch burst are more cornerback than safety, which is why he’s likely to be a coveted toy for teams looking to upgrade and diversify their sub-packages. He can sit in center field all day if needed, and he’s an adequate open-field tackler but has room for improvement in that area. McKinney represents the new breed of versatile, matchup safety with high upside as an early starter.”

Some of his best attributes are his instincts and ability to read a QB’s eyes while in coverage. McKinney is outstanding in man coverage and has tremendous hip fluidity which allows him to change direction easily and while at top speed. Nick Saban often tasked him to cover tight ends and slot receivers and he showed he’s more than up to the challenge.

McKinney is going to go early in the draft, possibly even before the Patriots are selecting at #23. While they may decide to go in another direction with their first pick, if they’re looking for a playmaker who’ll step in on Day 1 and provide quality reps and who’ll eventually replace Devin McCourty, then he would be an outstanding pickup. Many people are split on who is the best safety in the 2020 draft class, McKinney or Grant Delpit from LSU. The feeling here is you can’t go wrong with either.

McKinney’s highlight reel tape from JustBombs can be seen here: