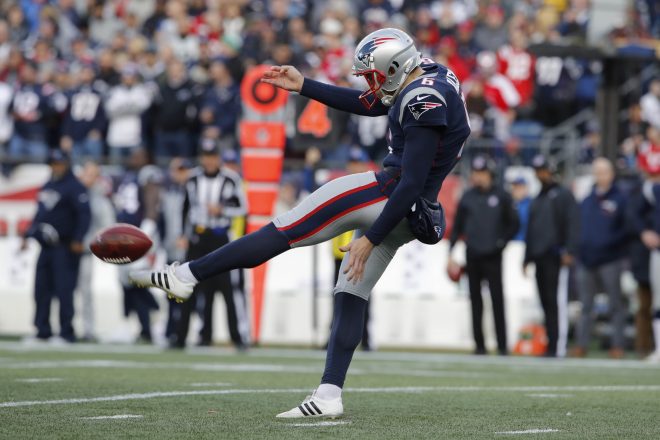 Tim Goad grew up in rural tobacco country in Virginia. His high school was so small their were just 16 players on the football team. As a result he had to play multiple positions, including kickoff returner. Goad was a four year letterman for the Tar Heels and twice a first team All-ACC.

In week three of his rookie season Goad got his first start when Brent Williams moved to defensive end due to an injury to Ken Sims. Goad remained a fixture at nose tackle for the next seven seasons with the Patriots. Tim started 105 games for the Patriots, including consecutive streaks of 46 games and 31 games. Goad’s steady, consistent play resulted in his being named to the Pats All-Decade Team of the 1990s despite the fact he was not with the club for more than half of those years.

Since retiring from football Goad has worked as a jackman and pit coach on the Nascar circuit, and joined the Bass Masters pro fishing tour.

Ryan Allen twice won the Ray Guy award as college’s best punter, yet was not drafted. In his rookie training camp he outperformed Zoltán Meskó to win a roster spot in 2013. During that season Allen set a franchise record with a 45.9 yards per punt average, while landing 29 of 76 punts inside the twenty.

In 2017 Allen set a franchise record by limiting opponents to only 23 returns at an average of 4.6 yards per return. His career average of 45.3 yards per punt is also a team record. The three time Super Bowl champion was clutch in the playoffs. Los Angeles was forced to begin drives on their own 7, 2 and 6-yard line after punts by Allen in Super Bowl 53. The Patriots went 13-3 in the sixteen playoff games Allen played for the Pats.

Jess Phillips was originally drafted by the Bengals as a safety from Michigan State in 1968. He switched to fullback the following year, and was the leading rusher for the Saints in 1973. Phillips was productive in a backup role, averaging 6.6 yards per carry in his two years with New England. He scored a touchdown in the Ben Dreith game that should have been the winning points, putting the Pats up 21-10 in the third quarter. Phillips also averaged 28.4 yards on kickoff returns in ’76, third best in the NFL that season. After ten years in the league he retired on April 10, 1978. Phillips later worked as a stock and commodities broker for Prudential-Bache Securities in Houston.

Eric Moore had most recently played for the Florida Tuskers of the short-lived United Football League when he was signed by the Patriots. Moore was immediately productive, with a strip sack and four tackles in his first game. Moore started the last three games of the season; in four games he had 14 tackles, two forced fumbles, two tackles for a loss and a pass defensed. Despite that bright start Moore failed to make the roster out of the 2011 training camp. He was re-signed for two games in December but never played in the NFL again after that.

The former Arizona State offensive lineman never made it to the gameday roster, spending most of the 2016 season on the Pats practice squad. Douglas remained with the Patriots for the full 2017 offseason before being waived at the end of training camp. He appeared in 17 games with Miami prior to arriving in Foxboro, and played in 15 games with five starts for Tennessee last year.

Others with a New England connection

And one for February 29:

John Niland, 76 (1944)
Born in Quincy, MA
A fifth overall pick of the 1966 draft for Dallas, the left guard played in 138 games and was named to six consecutive Pro Bowls.