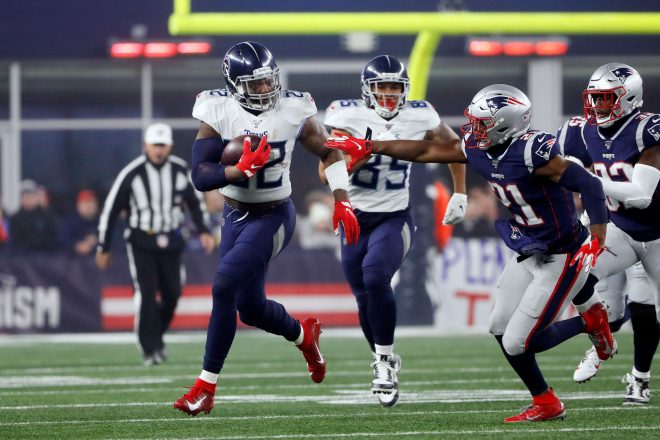 The Tennessee Titans behind a crushing running game of Derrick Henry who rushed for 182 yards and a tough defense smothered the Patriots and will move on in the playoffs, knocking off New England 20-13.

The Patriots will not play in the AFC Championship Game for the 1st time since the 2010 season when they lost to the Jets in the Divisional Round. The Patriots offense failed them when they needed it the most. After moving the ball well and scoring 10 points early, the offense, as it had done often in the second half of the season sputtered and fell flat.

But the Titans behind Henry was the story of the game. Henry had 204 of the Titans 272 yards from scrimmage. And he had 182 of the Titans 201 rushing yards. And the Patriots failure in the red zone was once a big part of the outcome. After taking the opening kickoff and driving the ball down to the Tennessee 18-yard line they stalled and had to settle for a field goal.

Brady then led another nice drive and this time they would finish. Sony Michel had a big 25-yard run. Brady then hit Ben Watson for 11 and they were in business. From the five-yard line, Julian Edelman ran a jet sweep early in the 2nd quarter and scored easily to put New England up 10-7.

After stopping the Titans twice, the Patriots had the momentum and a nice …and rare punt return from Mohamad Sanu put the team at the Titans 47. The team moved easily and when Brady hit Rex Burkhead with a screen, it looked like he would score. But the Titans stopped him at the one. That’s when the game turned. Three times the Patriots ran the ball, Michel lost a yard, Burkhead gained a yard and Michel lost a yard again. The Titans regained the initiative and wouldn’t give it back. The field goal made the score 13-7.

Once again, bad situational football doomed the team. Henry ran for 29 yards on first down and he gashed the Patriots on the ground and got them to the New England 23. Then he caught a 22-yard screen pass down to the one. He’d power it in to give Tennessee a 14-13 halftime lead.

The Patriots were shut out in the 2nd half and as we’ve seen so many times this season, a big gain was wiped out by a penalty. Brady connected with Watson for 38 yards but Shaq Mason was called for being illegally downfield.

Tannehill got pressured early in the 4th quarter and throwing off his back foot, had the pass sail and die where Duron Harmon picked it off.

With a final chance to move from their 11, with 4:32 to go. Brady hit James White for 20 yards but they would stall and opt to punt with 3:30 to go on 4th and 6. The killer was on 2nd down when Julian Edelman was wide open and dropped a pass that would have moved the sticks.

The Titans held the ball and punted with just about 20 seconds to go. Brett Kern hit a beauty and it rolled and died at the Patriots one. And in a fitting way to end the season, Brady’s pass bounced off of a receiver’s hands right to the Logan Ryan who returned it for a pick-six. Ball game 20-13 Titans and they move on to Baltimore.

A very disappointing end to what promised to be another special season. The offense, specifically the passing game needs an overhaul. We’ll go over that later but for now, the Patriots season is over and they had plenty of opportunities right in front of them but couldn’t convert.