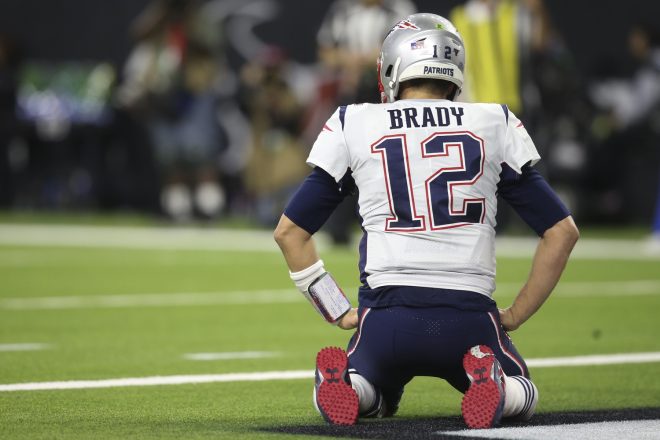 It appeared that the plane carrying the players suffering from the flu was the only one that landed in Houston this weekend. The Patriots looked like a team suffering from a malaise that had them as a group, a step (or two) slower than the Texans.

Houston dominated this game completely for about 50 minutes and then went to sleep, playing soft defense that allowed the Patriots to make the score much, much closer on the scoreboard than it was on the field. They nearly gave it away as Brandon Bolden got a hand on an onside kick that bounced just out of his reach or Houston may have given the game away completely.

But don’t let that distract from the fact that the Patriots looked terrible all game long. The offense is adrift with no identity, no separation from their receivers, no team speed, and right now no answers.

Worse, the defense, which has been the strength of this team all season long looked slow, out of sorts and out-coached on Sunday night. And if the Texans made the defense look slow, the team has Kansas City next up on the slate. They blew out the Raiders earlier on Sunday.

The ugly loss in Houston, knocked the Patriots out of the #1 seed as the Baltimore Ravens now own that, courtesy of a knock-down, drag-out last-second win over the San Francisco 49ers. But the Patriots now have to look over their shoulder in the division at the 9-3 Buffalo Bills who are now just a game back.

Here are four main observations from the game:

The Offense is Adrift In a Sea Of Mediocrity:

Perhaps even mediocre is a stretch right now. This offense right now looks terrible. And there aren’t any excuses anymore about guys being injured. All week, we said that there was a chance that everyone could be back (they were) this week and that the Patriots offense would have their full complement of weapons (they did) as they’d have for the rest of the season. And if this is what they have, then it is a scary proposition.

The lack of speed on this offense right now is alarming. Opposing defenses now know that they have to double cover Julian Edelman. And because of the dearth of speed outside, they can afford to put a safety on James White, because they don’t fear any of the other receivers or tight ends.

As a result, the number of targets successfully completed to either Edelman or White has dropped. Last night Brady was just 14 of 23 targeting those two. And yes, many of those came in garbage time. The secondary players have to step up and make the defense pay. They haven’t and last night was a microcosm of what this offense is suffering from. The remaining receivers were targeted 23 times by Tom Brady and he completed only 10 of those.

Phillip Dorsett and Mohamad Sanu were targeted 11 times and they combined for 5 catches for 29 yards. That just isn’t going to cut it in any way, shape or form. That is averaging just 2.6 yards per target and under 6 yards per reception.

And it isn’t like the Texans have some sort of juggernaut defense. They entered the game with a suspect run defense and a pass defense that had been burned for most of the season. The shut down the receivers and blanketed them far too easily.

Coaching Staff Made Some Curious Decisions:

The Patriots usually are the ones who make the opposition crap their pants and make decisions that go a long way toward New England coming away with a win. In Houston, it was their turn to wear the propeller hat.

Down 14-3 late in the first half, they faced a 4th and 10 from the Houston 39-yard line with just 26 seconds to go. A first down would have given them a chance to at least kick a field goal to go into halftime with a bit of momentum and the opportunity to double score.

Instead, they opt to punt conceding a scoring chance, which says a lot on how they feel right now about this offense and the lack of trust they had last night with the defense being able to stop Houston with 20 seconds to go.

In the second half, they seemed to abandon the running game far too quickly, rendering Sony Michel to the bench. We thought that they would be able to run the ball against the Texans defense and in the first half, they did so, fairly effectively. This put even more pressure on a moribund passing game.

James White ran effectively later in the game, but much of that had to do with Houston just trading space for time after they opened up a big lead.

Then in the second half, after they scored a touchdown, they lined up to go for two. Seeing something they didn’t like with the Houston alignment on defense, instead of calling a time out, they took the five-yard penalty and then flipflopped, opting to kick the extra point. Kai Forbath then hooked it badly left…Ugly.

And Then There is Harry:

Patriots 1st round draft pick N’Keal Harry was used as a blocker on the early drive and performed well, showing the willingness and ability to use his size and physicality to their advantage.  Then came Brady’s interception.

Harry ran a slant from the left side on a 3rd and 4 and allowed Bradley Roby, who gave him a slight tug on the jersey, to get inside and pick off Brady. Harry slowed his route, something he can’t do and didn’t use his body effectively enough. It was a rookie mistake and one that has to be corrected.

But that was it essentially for Harry for the night. He had played 12 snaps up to that point. He wasn’t totally benched but only played 10 snaps the rest of the game. And wasn’t targeted again. We’ll have to rewatch the tape, but I didn’t see him in the second half.

It doesn’t matter whose decision it was, Bill Belichick, Josh McDaniels, Brady, but this is the kind of situation that needs to be looked at. Granted Harry made a mistake, but for him to get completely frozen out for the rest of the game over it? Ouch. And it wasn’t like the rest of the receivers were lighting it up making him expendable.

Where do we go from here? Good question…

Texans’ Coaches Had the Patriots Defense Figured Out:

This was a great coaching job by Houston and flawlessly executed by QB Deshaun Watson. The Patriots were a bit passive early and dropped back in zone coverage, respecting their speed at wide receiver and Watson’s ability to move in the pocket.

When the Patriots played that way, Watson immediately targeted the middle of the field in the sweet spot and was hitting on those passes easily. Or they’d isolate a linebacker in coverage with Duke Johnson out of the backfield, which was a mismatch.

When they switched to man coverage and specifically to their Cover 0 technique, the Texans went deep. Their speed (unlike New England) was on full display, DeAndre Hopkins, Kenny Stills, and Will Fuller gave them problems in this look.

The pass rush wasn’t much of a factor for much of this game, which hurt. And then when it did get home, Watson escaped with a great move and kept a drive alive which resulted in a Houston touchdown.

Give a ton of credit to Houston’s offensive game plan, they knew what they wanted to do and executed it extremely well.

So, the Patriots return home at 10-2 with the Chiefs coming into town with many more questions than answers on this snowy Monday morning.