3 years ago at 10:30 am ET
Follow @SteveB7SFG
Posted Under: Patriots Report Card 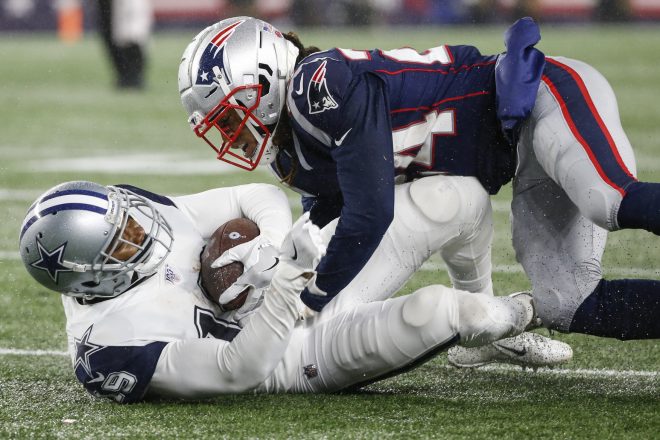 Patriots are 10-1 and head off to Houston for SNF

The Patriots offense was shorthanded and banged up but couldn’t muster much either as the Dallas defense also played a strong game. It was a tough day to throw the ball with the way both defenses played coupled with the weather conditions.

So, check out our grades and let’s take a final look at the Cowboys game.

Tom Brady would appear to have struggled mightily if one were to look strictly at his numbers. Brady completed 17-37 for just 190 yards with one touchdown and no interceptions. But his top wide receiver is playing hurt and probably should be sitting. His number 2 and 3 wide receivers missed the game with injuries.  And in the poor conditions, his receivers dropped six passes and about 4-5 more that were defended well, could have gone either way.

Brady ran the offense well despite those limitations and while he sailed a few of his throws, he also threw a few beauties including the touchdown pass to N’Keal Harry on a fade right at the pylon where only Harry could catch it.

On the 3rd and 20, where he slid in the pocket away from inside pressure from Robert Quinn and ripped a laser down the middle to Julian Edelman. He had another nice pass to Jakobi Meyers who was wide open down the seam but the safety Xavier Woods closed quickly and tattooed Meyers separating him from the ball.

The running game showed some signs of life on Sunday afternoon and the backs had 104 yards on 25 carries before a couple of Brady kneeldowns at the end of the game. Sony Michel had a pretty decent day, rushing for 85 yards on 20 carries. He made some nice cutbacks against the grain and generally took whatever was available. Sony had four runs of 10 yards+ on Sunday.

Brandon Bolden (1 carry, 11 yards), James White ( 2 carries, 5 yds), and Rex Burkhead (2 carries, 3 yds) were used only sparingly as this was a Michel day for the vast majority of the game on the ground.

Is it time to start to worry about the health of James White? His production and usage is way down from what we’d normally expect and he just doesn’t look like himself on the field.

Julian Edelman gets high marks here. He’s dealing with a shoulder injury and it seemed like every other play he was rotating it around in the huddle. He must be in a lot of discomfort. And in a perfect world, he’d probably sit for a week. But he can’t right now so he guts it out and continues to produce. Edelman had eight catches for 93 yards. On the 3rd and 20, he displayed a veteran’s savvy, recognizing the soft spot in the Cowboys Cover 2 shell and sitting down just over the yard marker.

Jakobi Meyers had a few stellar plays and a few he’d probably like to have back. His drops are something that he’ll have to deal with, I think it is a mental thing where he’s pressing a bit too much. But he also had some very nice plays as well and filling in for Mohamad Sanu he had a solid four catches for 74 yards. He caught a short Brady pass and shook off a tackle and broke it for a big gain. His 32-yard reception was the Patriots longest play of the day.

N’Keal Harry had only one catch for 10 yards but it was a very big one and the only touchdown of the day for either team. Harry has a ton of upside and we saw that he can be a red-zone target. He matched up with Byron Jones and ran a nice fade where he high-pointed the ball and snatched it out of the air. He missed on another later, but his potential is there and we expect he’ll carve out a larger role as the weeks roll on.

Ben Watson was only targeted once and had no catches. Matt LaCosse had one catch for five yards. This seemed like a matchup on paper where they would see more targets but it didn’t work out that way.

Watson did a good job in the running game, however. He and Isaiah Wynn teamed up for the key block on the Michel run to ice the game.

The offensive line had a much better game this week against the Cowboys. Isaiah Wynn returned and generally got stronger as the game went on. The running game showed some signs of life, and while it was far from perfect it was much better.  The pass blocking for Brady was much better as well, there were several plays where he had all day long to throw.

Bill Belichick spoke about the toughness of Marcus Cannon after the game. Cannon had an illness all week and Belichick spoke to how he had a tough time even suiting up on Sunday. But he toughed it out and played nearly the entire game. He was spelled by Marshall Newhouse who is the swing tackle now that Wynn is back.

It wasn’t great or perfect but much better for Dante Scarnecchia’s charges. Let’s see if they can start building off of that.

The defensive line had another nice day against the Cowboys. The Cowboys have one of the best offensive lines in football and they like to run the ball to open up the passing game. While they did run for 109 yards, with Ezekiel Elliott getting 86 of those on 21 carries, he didn’t take over the game and they limited the big plays, the third-down conversions and the ones in the red zone.

Lawrence Guy and Danny Shelton continue to have very solid seasons and they are getting penetration and disrupting the running game. The Patriots didn’t get a ton of pressure on Dak Prescott however.

Adam Butler pressured Prescott just enough though to force him as he was rolling out to loft the ball too high for Blake Jarwin to stay inbounds.

The linebackers had another tremendous game led by Jamie Collins who had 10 tackles including one for a loss. That was a typical Collins play where he diagnosed a run by Elliott to the right side and shot the gap to hit him in the backfield. He also made a tremendous play later in the game. Collins was covering Jason Witten on a drag route across the middle. But he kept his eyes on the QB and when Prescott began to scramble, Collins disengaged from Witten and hit Prescott two yards short of a first down.

Don’t Hightower had another strong game and Chase Winovich showed sideline to sideline hustle coming all the way from the right side to chase down Pollard from behind  on a screen pass to the left.

The secondary was tremendous, Prescott came into this game leading the league in passing and he didn’t crack 200 yards until the final snap of the game. The Patriots took away his top two favorite targets, Amari Cooper and Jason Witten and rendering them to MIA for the day.

Stephon Gilmore held Cooper without a catch and had an interception on an ill-advised throw from Prescott in the first half. Witten was held to one catch for 5 yards. Gilmore nearly had another pick in the end zone. Witten was covered by Chung and Prescott tried to gun the ball in the back corner of the end zone. Gilmore read it perfectly and disengaged from Cooper and nearly came up with his second pick.

Matthew Slater is still amazing at his age and one of the best STs players in the league. He blocked a punt, timing it perfectly setting up the Patriots first touchdown. Nick Folk missed two field goals at the open end of the stadium where the wind was really gusting. He also made two down that end. He gets a pass for those. Jake Bailey was trying to hang his punts up in the air as the return game was hampered by weather.

The Patriots coaching staff had the team excellently prepared to play in those conditions, something the Cowboys staff did not. Bill Belichick knew that Sunday would be a game of field position and situational football. The Patriots excel at that, and that was the difference.

The defense had a tremendous game plan of taking away Prescott’s two big receivers and forcing them to beat them elsewhere…they didn’t and could only muster three field goals.

Coaching goes a long way in this league and the Patriots had a big advantage in that department on Sunday. It was the difference and the reason they are now 10-1. We’re on to Houston.