3 years ago at 8:30 am ET
Follow @SteveB7SFG
Posted Under: Patriots Commentary 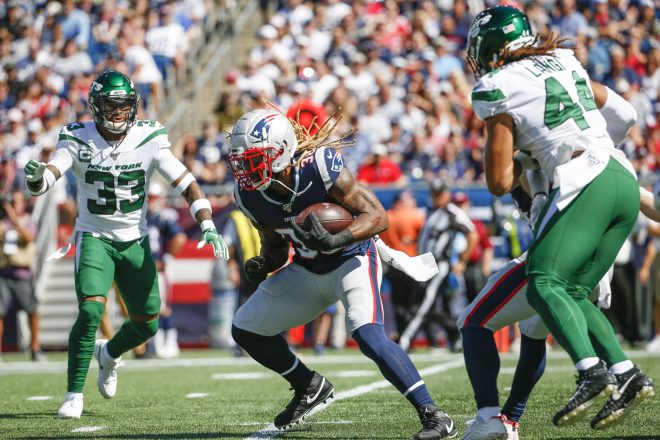 The New York Jets won their first game of the season last Sunday in the Meadowlands over the Dallas Cowboys and there was optimism in the air. Not only did they get off the schneid, but they got their quarterback, Sam Darnold back on the field, which gave their offense a huge shot in the arm.

All of a sudden, Adam Gase, who many fickle members of the NY press corps were calling for his head a week ago, now has, as they put it, has a chance to go on a run. As Yakov Smirnov would say, “What a country” only in New York.

So, here are our second look at the Jets this season:

Sam Darnold missed three games with mono and returned to play a very impressive game last Sunday against Dallas. The Jets offense was non-existent during his absence, however, in all fairness, his backup QB was injured early in Game 2 and they were forced to go with Luke Falk who was signed off their practice squad.

Darnold showed no signs of rust and led the Jets to a big first-half lead which they parlayed into a 24-22 win over Dallas. Darnold finished the game 23-32 for 338 yards with two touchdowns and an interception. It was one of the best games in his young career. It was highlighted by an impressive 92-yard touchdown pass to Robby Anderson in the first half. He also hit Jamison Crowder six times for 98 yards.

In the three games that he missed, the Jets offense scored one offensive touchdown. On Sunday, they scored three. Is it possible for just one player to transform an offense? It certainly appeared that way on Sunday. He had them moving the ball well all day long.

The Running Game Has Yet to Get Going:

The Jets got Darnold back and the passing game was clicking for the first time this season with Anderson, Crowder and Demaryius Thomas all contributing last week. But now the focus will be getting the running game with Le’Veon Bell untracked. Bell was given a four-year deal worth $52.5 million dollars this spring, but has yet to break out.

Part of the reason has been with Falk at quarterback, opponents were stacking the box and basically daring the Jets to throw the ball. Which is why Bell has had 85 rushing attempts (16th in the NFL) but only 256 rushing yards. That is only 27th in the league with a long run of just 13 yards. The Jets as a team are averaging just 64 yards per game on the ground, 30th in the league. That will have to change.

They’re going to need a better push from their offensive linemen but with the team using more play-action on first down, that should definitely help matters. Even though left guard Kelechi Osemele is having shoulder surgery, his replacement Alex Morgan is playing well and may have supplanted the veteran.

Williams on the Trading Block? Possibly As the Deadline Approaches:

The jets have a decision looming with their excellent DT Leonard Williams. He’s in the last year of his rookie contract and the 25-year old is expected to draw significant interest…as well as significant money on the free-agent market. That is if the Jets allow him to hit free agency.

But the Jets have other options, they can lock him up with a long-term contract extension now, or wait and re-sign him in the spring. But another option is out there and that is, they could trade Williams at r before the trade deadline.

There are reports out on social media that the Jets are receiving lots of offers for Williams, and rightfully so, he is an outstanding defensive lineman who frequently draws the double teams from opponents. The Jets have said that, right now, they have no plans to trade him. But with Henry Anderson, Steve McLendon and this season’s first-round pick Quinnen Williams on the roster, they could set themselves up with a deal at the trade deadline.

Jets Could Get Mosley, Herndon Back for Monday Night:

The Jets are hoping that LB C.J. Mosley and tight end Chris Herndon can return and play this week against the Patriots on Monday night. The Jets signed Mosley to a huge free-agent contract this spring and he was the QB of the defense and their unquestioned leader. It was no coincidence that before Mosley injured his groin in Week 1, the Jets were beating Buffalo 16-0. After he left, the Bills scored 17 unanswered points to pull out a victory.

Coach Adam Gase said on Monday that Mosley’s been progressing well and they believe he’s ready to begin practice. If he can practice and play on Monday night, it will be a big boost for the Jets defense. The offense could also be getting a key player back on Monday in tight end Chris Herndon.

Gase also remarked that Herndon is progressing well from his hamstring injury that he suffered as he returned from his suspension and that the team was going to be smart with it and see how it responds. Herndon can give the Jets the ability to attack the seam more and be a bigger red-zone target than his replacement Ryan Griffin.

In recent years the Patriots have owned the Jets in the head-to-head matchups winning the last seven in a row. And that number could have been much, much higher as the Jets pulled out two overtime victories in the Meadowlands including the 2013 game with the bogus “pushing” penalty on Chris Jones, gave the Jets a second chance, erasing a 56-yard miss with a 15-yard penalty, where Nick Folk made his 42-yarder for the win. That penalty hasn’t been heard from since…but New England gets all the calls, right?

This week, optimism is high in New Jersey as the Jets have refound their swagger on offense, their defense has been playing solid football and with their QB and other players coming back, they are hoping to catch the Patriots at just the right time.

New England lost Dont’a Hightower, Pat Chung, Josh Gordon, Matt LaCosse, and Jakob Johnson to injuries last week. Johnson ended up on IR, while Gordon is not expected to play. If Chung especially, and Hightower can’t go, it puts the Patriots in a much more vulnerable position on Monday night.