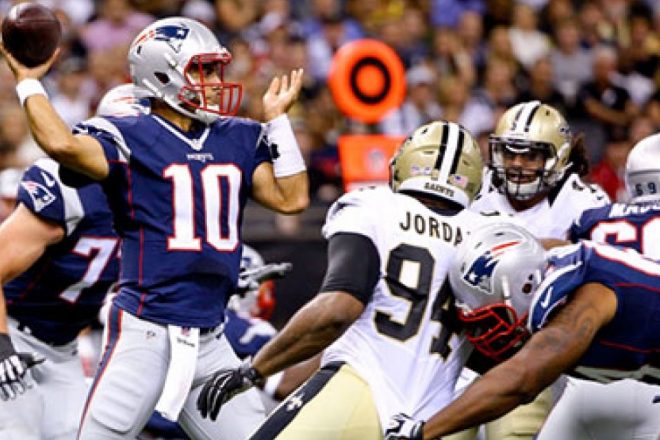 The Patriots Jimmy Garoppolo had a very impressive game for the Patriots in their come-from-behind win over the Saints on Saturday night. Stephen Gostokowski booted a 35 yard field goal with 14 seconds left to give the Patriots a 26-24.

Showing some nice progression after an up and down Week 1 loss to the Packers, Garoppolo was in charge throughout. He was extremely sharp completing 28-33 for 269 yards, one touchdown and one interception. With time winding down in the first half, Garoppolo scrambled and somehow broke a tackle that would have been a sack and found Chris Harper in the end zone for his first touchdown pass of the preseason.

As time moves on the coaches are seemingly finding a comfort zone for Garoppolo and what he does well and he’s looking much more impressive than he did just a week ago. Most impressive was the fact that he was spreading the ball around to multiple receivers which means he’s seeing the field very well.

Offensive Line Struggles Early: The offensive line was overwhelmed at times at the point of the attack early in the game. The Patriots made a concerted effort to run the ball and the Saints were getting penetration and smothering LaGarrette Blount deep in the backfield. Tom Brady played in three series, and all three ended in three and outs, which is not a good start for the top unit of the offense.

The offensive line played much better in the second half, protecting Jimmy G. and opened up some holes in the running game after falling down 21-0.

Defense Gashed by Brees: No sugar-coating this one….the Patriots top defensive unit was put on their heels by Drew Brees and Brandin Cooks who torched the secondary again and again. The coverage in the secondary improved later in the game but when going against Brees and the top unit, they didn’t look good.

Cooks blew past Duron Harmon for a 45-yard touchdown and consistently gave Devin McCourty fits on the outside. Malcolm Butler played only the first couple of series and got the rest of the night off.

One bright spot for the defense was the continued stellar play of DE Jabaal Sheard. He’s primed for a big season.

James Morris had another big play when he knocked the ball loose from WR Josh Morgan which S Jordan Richards recovered ending a Saints scoring threat. Dax Swanson took a terrible angle on the play which allowed Morgan to not only catch the ball but have a big gain after the catch. But Morris never quit on the play and came up behind Morgan and jarred the ball loose. Just the kind of play that the coaches look for when trying to lock down the 53 man roster.

Harper/Lewis Capitalize on Opportunities: One of the recurring themes for Saturday night’s game was the opportunities and making the most of them. Two players that really helped their cause were WR Chris Harper and RB Dion Lewis.

Harper was pressed into duty with all the injuries at WR as well as a returner on Special Teams. We mentioned the touchdown catch at the end of the first half, but he also made a good impression for the second week in a row.  He caught five passes for 69 yards and a touchdown. His punt return with just over two minutes remaining in the game put the Patriots in great position to win the game….Granted it is only preseason, but it was a tremendous situational football opportunity and Harper aced the test.

Lewis who missed the first preseason game looked excellent against the Saints, showing great burst in the running game, and scored on an 11-yard run in the third quarter to narrow the Saints lead to 21-14. He also looked like a natural fit for Shane Vereen’s third down back slot. Lewis caught five passes for 36 yards on the night. James White played well again in the same role and this positional battle may come down to the wire.

Gibson Solid Again, and then Hurt: Brandon Gibson was having another solid game with eight catches for 68 yards before he seemingly injured his bad knee late in the game. Gibson is a versatile player that can play inside or outside; And has good chemistry with both Brady and Garoppolo.

His injury wear bear watching closely as the rest of the wide receivers have a slew of injuries.

Game Ball: Garoppolo, showed tremendous poise and confidence this week. He didn’t get flustered and would lead the team all the way back from a 21-0 hole. If Tom Brady’s suspension isn’t reduced or vacated….this would be the type of performance the coaches are looking for.

Falling Down the Depth Chart: Logan Ryan, the third year player who was supposed to nail down the right corner position did make a few plays but was also burnt badly a few times in coverage. Ryan is not having a strong preseason after a so-so training camp.