3 years ago at 7:49 am ET
Follow @SteveB7SFG
Posted Under: 2019 Patriots Regular season 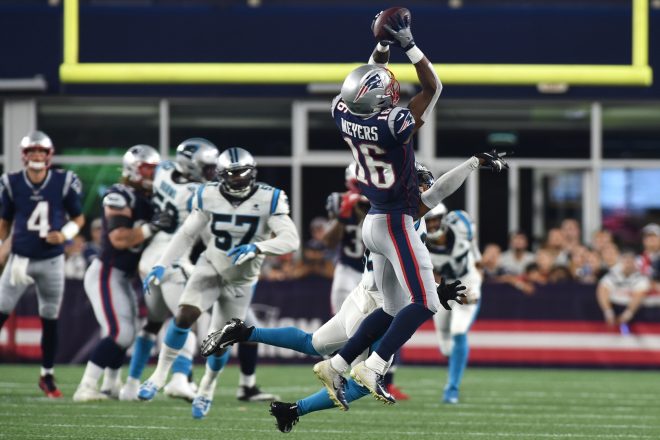 The Patriots head out to Western N.Y. to take on the Buffalo Bills on Sunday afternoon. Both teams enter at 3-0 but there is real hope in Buffalo that they have a team that can finally solve Bill Belichick and the Patriots. Many national writers have stated that this Bills team is bound for the postseason with a one from NFL Network stating that they will dethrone the Patriots this year.

The crowd in Buffalo is always a loud and raucous group, expect that x10 on Sunday. This game will be one of the games the league posts in the national spotlight for the 1:00 p.m. timeslot. And it should be a typical Bills – Patriots game with physical play and tough defense.

Here are our Patriots players to watch this week in Buffalo as the Patriots try to improve to 4-0 on the season.

White missed last week’s game with the Jets due to his wife giving birth to a baby boy. But he’ll be back and probably be a big part of the passing offense on Sunday. Last year in Buffalo on MNF, White was targeted 14 times and had 10 catches for 79 yards in the Patriots win that night.

With Julian Edelman questionable to play this week, White and Rex Burkhead become even more valuable in the passing game as the Patriots will try to replicate some of the production that they normally get from Edelman by using the backs out of the backfield.

Red zone production this week will be key for both teams but having White in the backfield gives Tom Brady the option of moving him around and trying to create favorable matchups for the offense.

The Bills brought in Cole Beasley from Dallas this spring and I’ve been beating this drum since then that Brian Daboll will use the slot receiver much like the Patriots use Edelman. He has 17 catches thus far on the season and has become a favorite target of QB Josh Allen.

Jones has been playing tremendous football since the beginning of the summer and he’ll draw the matchup with Cole Beasley. This should be one of the keys to the game, to see who wins this duel. Jones has the talent to win this but Beasley is much like Edelman in that he’s tough to corral off the line with his quickness.

One area to watch is the second half. The Bills have targeted Beasley a lot in the first half of games but for some reason have gone away from him in the latter stages of their first three games. They said earlier this week that they’re planning on using him some more. The latter stages of the game may come down to some chain-moving downs with these two battling against each other.

Is there a player who is rated so differently by so many people as Dorsett? Some think of him as an outstanding receiver, others as a JAG while many more think of him as something in between. Forget about convincing anyone else to go along with your feelings, after all, this is the world we live in now.

Dorsett has been a Dyson vacuum cleaner with anything thrown his way, he captures everything. And he’s been a very good #3 option behind Edelman, and Josh Gordon. He was briefly #4 with another guy who is gone now. But that will change this week.

Can Dorsett step up in Edelman’s absence and be the #1 or #2 guy in the passing offense this week? Those are mighty big shoes to fill and a lot of production to cover. While he’s a very different player than Edelman, they’ll have to get him the ball in different ways than the way JE11 is used, but this week is a big one for Dorsett and the passing game.

Collins has been fantastic in his return to Foxboro this season. He’s making plays all over the field, and able to rush the passer, step up in run support and drop back into coverage. Part of the reason the Patriots defense has been so dominant this season is that they’ve found a way to unleash Collins in a variety of ways.

This week, Collins will be a very valuable piece in trying to shut down the Bills offense. With the ageless Frank Gore and Devin Singletary in the backfield, Collins will have to continue his play in run support along with Elandon Roberts and Ja’Whaun Bentley.

But in the passing game, one key component for the defense is keeping Josh Allen in the pocket. Collins will have to temper his pass-rushing with the knowledge that they have to contain Allen in the pocket and not allow him to make plays with his legs.

With Tom Brady’s favorite target in Edelman likely out this week and both tight ends banged up and on the injury report, Meyers is likely to see an uptick in his snaps this week. Thus far in 2019, he’s been productive in the limited chances he’s had on the field. This will be a big chance to earn more reps down the road and build some trust and chemistry with Brady, albeit against a very tough secondary.

The Patriots have used him mainly outside this season, I would expect to see him operating out of the slot more on Sunday. He doesn’t have Edelman’s quickness but he uses his body well and is a bigger type [6’2, 205] of a slot receiver. In NC State he caught 222 passes out of the slot from Ryan Finley [Bengals], of course doing it in the NFL is another matter.

It will be interesting to see how Meyers can produce in just the fourth game of the season. Especially with Buffalo’s defense which is very good and particularly their secondary which is excellent. But he has the hands and the willingness to go over the middle and make those contested catches.