3 years ago at 7:20 am ET
Follow @SteveB7SFG
Posted Under: 2019 Patriots Regular season 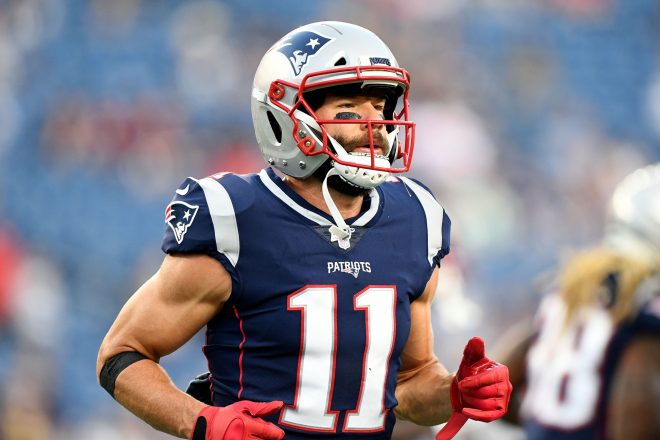 The NFL regular season is back and judging from the game tonight between the Packers and Bears, Thursday Night Football is in mid-season form. However, the Patriots and Steelers are set to kick off the Sunday Night Football season with what we hope is a much better product.

The first game of the season is always the toughest to get a great feel for because of so many of the starting players from either team barely played during the preseason. The offensive and defensive top units get only a cameo on the field.

But there are some players that we feel must step up for the team to be successful. With that in mind here are our Patriots players that we will be watching closely on Sunday night in the game against the Steelers.

Wynn was the Patriots top draft choice a year ago but suffered an injury in training camp which forced him to miss his entire rookie season. The Patriots eased him back on to the field and limited his reps until they felt he was really ready to go. He’s now protecting Tom Brady’s blindside at left tackle.

His conditioning will be an area to monitor as the game moves forward. Wynn will have his work cut out for him, the Steelers strength defensively is in their front seven. Wynn will probably draw a lot of Cam Heyward in this one. A very tough first test.

Karras has been a trusted but backup interior offensive lineman for the past few years. With David Andrews out for the season after suffering a blood clot in his lung during the preseason, Karras is now the Patriots starting center.

Now he’ll have to hold up inside and make all the right calls when it comes to protection. Look for the Steelers to test him right away by bringing A-gap pressure and blitzes to try and force the issue. Like Wynn, this is a big test for him in Week 1.

The Patriots other 1st round draft pick from a year ago is coming off a solid rookie season along with an outstanding playoff run where he posted over 300 yards and six touchdowns during the Super Bowl run.

Michel looked like the Georgia-version of himself this summer, explosive, with excellent vision and the ability to make plays at the second level. With some questions along the offensive line and Tom Brady’s receiving core, the running back position will be leaned on heavily in the early going this season. And that begins with Michel. They need to get a solid production night from Michel and all of the backs in this one, which should help in getting the rest of the offense untracked.

The Patriots are attempting to get Michel more involved in the passing game, they were trying to get he and rookie Damien Harris involved all summer. James White and Rex Burkhead have always had that versatility, but if they can get the two younger players more involved, especially Michel, it will make the offense difficult to stop.

Truth be told, we weren’t fans of the idea of bringing back Collins this year, but thus far, he’s proven to be a really big addition. The Patriots jettisoned him in 2016 for a third-round draft pick, but after getting paid by the Browns, Collins is back with the Patriots on a modest deal.

The linebacker position is deep with Collins, Dont’a Hightower, Kyle Van Noy, Elandon Roberts and last year’s rookie Ja’Whaun Bentley who flashed early but was injured early in the season and lost to IR.

Collins’ athleticism and versatility were on full display this summer and he could be a really valuable chess piece for the defense in 2019. We’re looking for him to play a big role in the game plan as they try to move him around and try to disrupt things with the Steelers offense.

The Super Bowl LIII MVP was looking good this spring and seemed poised to pick right up where he left off in February. But then he injured his left thumb in the time before training camp and missed nearly all of it and the preseason.

Edelman didn’t appear until the final preseason game against the Giants. He played in only one series and caught a 20-yard pass. But in going to the ground, he appeared to fall on the injured thumb and came off the field shaking it. The team stated that it wasn’t reinjured but just a scare and he should be ready to go for the opener.

Edelman has always had tremendous chemistry with Brady. They’ll need that on Sunday night since neither Josh Gordon [suspended] or Demaryius Thomas [injured] was able to spend much time with Brady during the end of camp. Look for Brady to look for his favorite target early and often in this one.

Remember him? With all of the talk surrounding the OL and WRs lately, Bennett has been relegated to nearly an afterthought around these parts.  After Trey Flowers got a huge payday from the Lions, many questioned where the pass rush was going to come from. The team swung a deal for Bennett, who was second on the Eagles in sacks with nine in 2018.

Bennett had a tremendous summer and dominated in one-on-ones during both training camp and the joint practices. Although he’s getting up there in age, there doesn’t seem to be any dropoff in his level of play. And like several other players in the front seven, he has the versatility to move around and create favorable matchups for the defense.

Look for the Patriots to try to ease Bennett’s workload a bit in the early going to bring some pressure on Ben Roethlisberger. I see Bill Belichick and the coaching staff using Bennett a lot this year from an interior position and try to collapse the pocket.

Check back with PatsFans.com for all of our pregame and post-game analysis. And if you’re a wiz at predicting the NFL slate straight up, register for our message board and then post your picks every week. We’ll see who is the top dog at the end of the season. That can be found here https://www.patsfans.com/new-england-patriots/messageboard/picks/

By: Ian Logue
Thursday night's New England Patriots loss against the Bills started off with a miscue and then a little bit of hope, but everything essentially went…
4 hours ago

By: Mark Morse
It was a bad look on Thursday night.  The Patriots embarrassed themselves in the 24-10 loss to the Buffalo Bills.  The frustration is starting to…
7 hours ago

By: Steve Balestrieri
But rather than calling two plays during the timeout, they called their third and final timeout. That’s Football 101 stuff
8 hours ago

By: Bob George
If the fact that the Patriots actually forced the Buffalo Bills into three punts is the only real positive of the game, you more or…
17 hours ago