4 years ago at 6:30 am ET
Follow @SteveB7SFG
Posted Under: Patriots Commentary 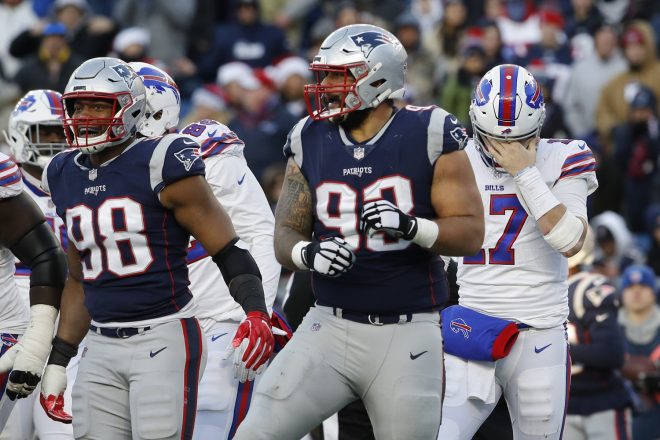 As we count down the days until the 2019 NFL Draft is upon us, we’re going to look at some of the positions that the Patriots need to address to restock, reload and prepare to defend their Super Bowl title. As everyone knows, winning back-to-back titles is never easy.

So, with that in mind, we’ve been taking a look at several positions that the team needs to address. And next up is the defensive tackle position. The Patriots lost former first-round pick Malcom Brown and Danny Shelton during free agency. But then they turned around and signed Mike Pennel of the Jets, who we called for before free agency began on one of our Patriots 4th and 2 podcasts. You can go back and listen to that here .

With a plethora of draft picks, the Patriots could still swing a trade for an established veteran, which we assume, they’ll try to do. One veteran who has been linked to the Patriots (I know, isn’t everybody?), is Chiefs DT Allen Bailey. Or the team can add thru the draft and they can possibly do both.

Here’s a list of some guys slotted to go early in the draft, in the mid-rounds and some late round guys that we believe would be a good fit here. We can start off by saying that we’d love Alabama’s Quinnen Williams, Ed Oliver from Houston, or Christian Wilkins from Clemson. But none of those guys in our opinion will last long enough for the Patriots to pounce…so we move on. One name to keep an eye on is Mississippi State’s, Jeffery Simmons. He was a top 4 interior DL on most boards but tore his ACL while prepping for the draft. He could be a steal later.

Lawrence is a natural two-gap run stuff who was an anchor in Clemson’s outstanding defense in 2018. He is a huge 6’4, 342-pound immovable object in the middle of the defense, but is not fat. He’s surprisingly athletic for his size with incredible size and strength. He’s a natural nose guard in the Vince Wilfork, Haloti Ngata mold.

What his Role Will Be: Lawrence could step in and start on Day 1 as a two-down run stuffer. The Pats love big guys who can play over the nose.

Will his Role Change from Year 1-2? Not much, he should have a big role right off the bat, if anything, with some improved pass rush moves, he could see more snaps

Lawrence has that big red flag when he tested positive for Ostarine and was suspended for all of Clemson’s playoff run. But if those issues are capped, he would immediately provide a huge presence inside against the run and would immediately become quite popular with the linebackers.

Tillery is a guy that has been frequently linked to the Patriots lately in many mock drafts. Tillery played in a rotation his first two years and was a starter for his final two. He has excellent size, (6’6, 295), speed (4.93), and athleticism (7.45 in the Three Cone) for a man of his size.

What his Role Will Be: Tillery also could step in and start on Day 1 as a one-gap penetrating interior lineman.

Will his Role Change from Year 1-2? Depending on how much is asked of him in Year 1, he could see a huge uptick in snaps in Year 2

Tillery would replace the aforementioned free agents but could cut into the snap totals of Adam Butler, the interior pass rusher in the NE defense

What is his ST Value? Minimal, potential kick blocker on FGs/EPs.

Watching the tape of Tillery, one is immediately reminded of Stephon Tuitt. He is an interesting prospect and there were times last year, where he appeared absolutely dominant inside. He has that potential. If the Patriots go after him, they’d be more of a one-gap penetration type of defensive call. Tillery, like Lawrence, is a 1st or 2nd round pick.

Willis is another one-gap penetrator who has had some off-field issues but was a very productive player for the Canes this season. Willis was very disruptive in the backfield with a terrific blend of quickness, and agility with excellent hand usage. He had 18 tackles for a loss and 4 sacks rushing from the interior.

What his Role Will Be: Willis could initially start as a 3rd down interior guy and gradually work his way up to being a three-down lineman

Will his Role Change from Year 1-2? With improved size, strength and technique, Willis could become a very effective all-around player.

No one, he isn’t a two-gapping space eater

Willis is a guy who when he’s on his game, literally jumps off the screen on tape. He’s very disruptive and has the type of penetration skills the NFL is looking for. He can get washed out at times in the running game and won’t be a two-gap guy but has a ton of upside.

Buggs is another one of those Alabama defensive linemen who they played out on the edge but will move inside at the next level. Good size at 6’3, 306 pounds. He’s versatile and can one-gap or two-gap. Buggs didn’t test well at the NFL Combine and that may cause his draft stock to go down.

What his Role Will Be: Buggs will be a guy that will have to be more consistent at the next level. But it seems he could fill in at any down as a one, or two-gapping lineman.

Will his Role Change from Year 1-2? With coaching and consistency, he has the talent to be an every-down player from the interior for the team

Brown or Shelton on the interior, but has work to do.

Buggs is a good, but not a great interior pass rusher. He cleaned up last year because of Quinnen Williams being next to him. But he can be a productive interior rusher at the pro level. He’s versatile and can play 3-technique, 5-technique, out wide in a 3-4 look or as a nose shade defensively. Buggs is a mid-round prospect whose versatility good be a good fit with the Patriots.

Wren is kind of a sleeper and could be a “boom or bust” prospect at the next level. At this time he may be a better athlete than football player and whatever team drafts him may require patience until he can show his potential.

What his Role Will Be: Wrenn is a developmental guy, in his first year, he may see the field only sparingly but has the physical capability for much more.

Will his Role Change from Year 1-2? With hard work with his coaches on his hand and footwork, he has the ability to be a pocket pusher inside.

No one, he’ll be trying to make the roster as a project.

Wrenn is a good gamble for a late round pick, if he’s there in the 6th or 7th round, he could be an enticing player with a lot of potential upside. He’s got the size at 6’5, 318 pounds to be a very enticing prospect.

Mack is still somewhat of a raw talent and plays the zero technique, as a true nose tackle. Mack underwhelmed for three years at A&M but a coaching shuffle brought the most out of him in his senior season. He’s a 6’1, 336 bowling ball who flashed big time at the Senior Bowl, being basically immovable at the point of attack.

What his Role Will Be: Mack is a classic nose tackle in the Wilfork, Ngata mold. He can eat two gaps and be a two-down run stuffer.

Will his Role Change from Year 1-2? With some increased pass rush moves, he could see a slight uptick in playing time

How Many Downs Can He Play? Two

He is a good run stuffing replacement for the departed Brown and Shelton.

Mack is a guy who the NFL is moving away from, with the trend moving towards pass rushing specialists, but the Patriots love a big guy who can set the anchor and two gap over the nose. He’s probably going to go later in the draft and would be a big body who can defend the run and be a good disruptor for two downs.

Other players that could fit the Patriots defense depending on how the board plays out, include Kingsley Keke, Texas A&M, Ed Alexander, LSU, Chris Slayton, Syracuse, and Daniel Wise, Kansas (brother of Deatrich)

The Patriots will address the defensive tackle position in the draft and still possibly add a veteran free agent. After losing Brown and Shelton in free agency, they were thin there but the addition of Mike Pennel should immediately ease some of that as he should get starter reps right off the bat.

They have Adam Butler who is more of an interior pass rusher like Wise who they can kick inside, Lawrence Guy is a big man who can stuff the run and generate some pass rush. I’d look for another big man inside who can anchor and take on double teams but there are some very disruptive, penetrating tackles in this draft. It should be interesting to see how they approach this year’s crop of rookies.