3 years ago at 8:44 am ET
Follow @bob_george
Posted Under: Uncategorized 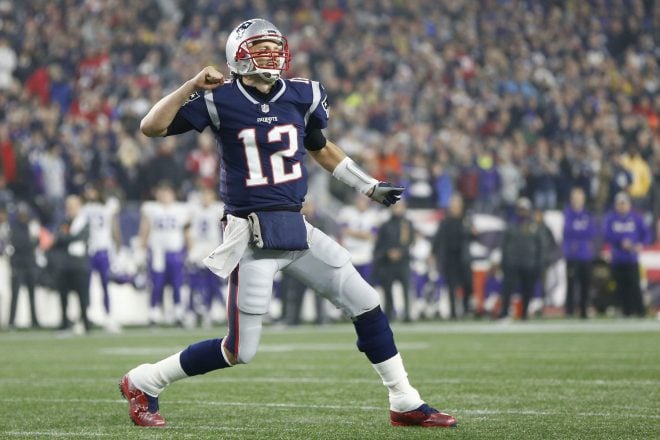 Bad news for Patriot fans:  They won’t be facing the Houston Texans next week.

Good news for Patriot fans:  They won’t be facing the Baltimore Ravens, either.

The Patriots badly likely wanted the Texans next week in the Divisional Round game next Sunday at Gillette Stadium.  The Patriots have never lost to Houston at home, regular or postseason.  But the Texans showed why they were the best opponent for the Patriots Saturday at NRG Stadium, as they fell meekly to the six-seed Indianapolis Colts, 21-7.  The Colts head to Kansas City next Saturday to take on the top seeded Chiefs, and the winner of Sunday’s other Wild Card game would go to Foxborough next week.

As the road team won on Saturday, so did the road team win Sunday.  Avenging a pre-Christmas home loss, the Los Angeles Chargers went into M&T Bank Stadium in Baltimore and put down the Ravens, 23-17.  The Chargers jumped out to a big lead against a mistake-prone Lamar Jackson, and were able to withstand a late charge by the Ravens despite John Harbaugh’s refusal to replace Jackson with former Super Bowl MVP Joe Flacco.

So, instead of a team with a good history of winning at Gillette Stadium in the postseason, it’s the Chargers who come to Foxborough this Sunday.  Both the Chargers and Patriots finished the regular season 11-5, but the Patriots are the higher seed because they won their division whereas Los Angeles lost a divisional tiebreaker with Kansas City and are the five seed.

In the postseason, the Patriots are 2-1 against the Chargers, with all three games coming in different locations.

The only postseason win by the Chargers over the Patriots was a long time ago, in the 1963 AFL Championship Game at Balboa Stadium on the campus of San Diego High School.  Keith Lincoln had 329 yards from scrimmage including 206 rushing yards, two touchdowns, and the Chargers bludgeoned the Patriots, 51-10.  The 1963 Chargers sent a challenge to the then-NFL champion Chicago Bears for a one-game playoff, and told them to name the time and place and use the official NFL ball.  George Halas and the Bears denied the challenge, and there are several observers from back then who think the Chargers would have won that game and have become the New York Jets five years early.

The next postseason meeting between these teams was a 24-21 win by the Patriots at Qualcomm Stadium in San Diego in 2006.  This game remains to this day the last time the Patriots won a road postseason game.  Stephen Gostkowski kicked the game-winning field goal, which helped Patriot Nation forget all about the recently departed Adam Vinatieri, for the moment.  But this game is best remembered for the fourth quarter interception of Tom Brady by Marlon McCree, but Troy Brown stripped McCree of the ball and recovered the fumble.  This led to Brady hitting Reche Caldwell for a four-yard touchdown pass to tie the game at 21-21 just prior to Gostkowski’s game winner.  The Chargers were the top playoff seed in the AFC that year, and both McCree and then-head coach Marty Schottenheimer have never been able to live down this loss to this day.

The teams met the following season, as the 17-0 Patriots met the Chargers on a gloomy Sunday afternoon at Gillette Stadium.  The Patriots earned their 18th and final victory of the season, with a 21-12 win over the injury-depleted Chargers.  Injured LaDanian Tomlinson spent most of the game sulking on the sideline wrapped in a parka, and both Philip Rivers and Antonio Gates were also nursing injuries.  The Patriots advanced to Super Bowl XLII with the win, but saw their chance at a perfect season go up in smoke in Arizona two weeks later against the Giants.

As mistake prone as the Ravens were on Sunday, the Chargers were also.  Leading 23-3 in the fourth quarter, the Chargers let the Ravens back into the game with some bad defense, allowing Jackson to get some confidence and hitting some long gainers.  Jackson hit Eric Crabtree with two touchdown passes in the fourth quarter to make the game close, but the Ravens fumbled the ball four times, the last of which by Jackson late in the game sealed the issue.  The Chargers did a good job of flustering the rookie quarterback out of Louisville, but in the end Jackson never should have been in a position to snitch a win late in the game.

If the Chargers do not put away the Patriots if they have a chance next week, Brady won’t be as forgiving as Jackson and the Ravens.

The Chargers present a formidable opponent, but the Patriots perhaps stand a better chance of dealing with them than the Ravens’ defense.  The Chargers were a terrific road team in 2018, going 7-1 on the road with the only loss against the cross-town rival Rams at the Coliseum.  All year long, the San Diego expatriates played their home games at StubHub Center (since renamed Dignity Health Sports Park) in the LA suburb of Carson, the home of MLS’ Los Angeles Galaxy.  The very small stadium is a magnet for visiting fans, so their home games are also virtual road games.  Like the Ravens, the Chargers won’t be afraid to play the Patriots on the road.

But the Ravens have a history of parlaying that lack of fear into playoff wins.  The Ravens are 2-2 at Gillette Stadium in the postseason, and should have been 3-1 but for a missed chip shot field goal.  The Chargers do not have this sort of history or expectations.  Houston would still have been a better opponent.  But the Patriots instead get an opponent without a long history of postseason success, and a team still looking for its first Super Bowl win.

The biggest challenge for Bill Belichick will be how to deal with the powerful Charger defense.  Under defensive coordinator/former Jacksonville head coach Gus Bradley, the Charger defense ranked ninth in the league against the run, pass and overall.  The Patriot offense will be largely healthy heading into this game, and one has to wonder if Rob Gronkowski will finally get the protective blanket taken off him and be allowed to do what he normally does.  Chances are that the Patriot rushing attack, good in recent weeks, will not be what takes the Patriots to the AFC Championship Game.

Whatever the case, the Patriots need to win, hope that the Colts upset the Chiefs out in Missouri, and then play host for still another AFC Championship Game.

In any case, it’s not Houston, but it’s not Baltimore.  One more week, and it’s playoff time once again on the Boston Post Road.