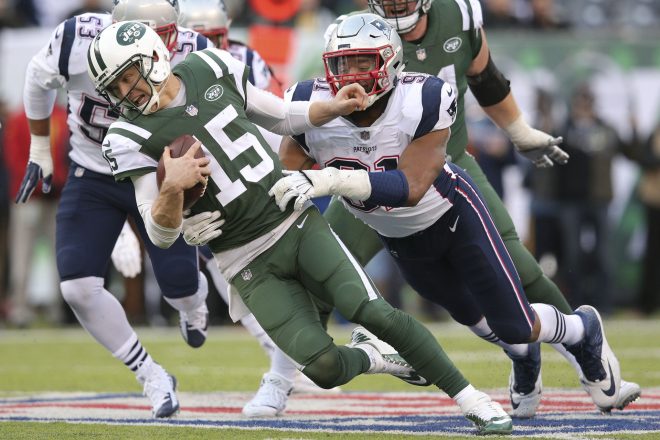 The New England Patriots entered their Week 12 matchup with the New York Jets seeking to bounce back from a disappointing loss to the Tennessee Titans two weeks prior.

Following a bye week to recuperate, the team welcomed back offensive weapons Sony Michel and Rob Gronkowski, both of which wound up playing big roles on Sunday.

In the first quarter, it was the Jets that struck first, as the Patriots early game struggles continued into another week coupled with costly penalties.

By the end of the quarter, Brady went to his best targets to tie the game at seven all when he found tight end Rob Gronkowski from 34 yards out.

The touchdown was setup thanks to curious decision making from Jets head coach Todd Bowles.

That 36-yard pickup by Edelman is a season high for the veteran receiver, eclipsing his previous high 33-yard reception against the Packers.

Rob Gronkowski logs his first touchdown since Week 1 on a 34-yarder. Third-longest reception of the season.

In the second quarter, Tom Brady re-wrote the record books some more.

Tom Brady has more passing yards, including playoffs, than any player in NFL history…#GoPats #Patriots @Patriots

The Patriots and Jets traded field goals in the second for a 10-10 tie going into halftime.

Stephen Gostkowski has now made 33 straight field goals of 50 yards or less, the longest streak of his career and longest current streak in NFL.

I missed you so much ❤️

So we got a pass breakup for Rob Gronkowski and now a reception for Stephon Gilmore.

In the third, rookie running back Sony Michel continued his career day and helped setup a go-ahead 32-yard field goal by Stephen Gostkowski. The  Jets quickly responded with a 38 yarder by Jason Myers. 13-13 with five to go in the third.

That previous run by Michel of 31-yards is the 2nd longest run by a Patriots running back this season, with Michel also having the longest carry of 2018 after his 34-yard run back in Week 5 against the Colts. #Stats #Patriots

With the Patriots struggling to find the end zone for the majority of the game, Brady found Edelman to put the Patriots back in front for good at a 20-13 lead.

Hey @gronk how’d I do? #OutLikeALight

Entering the fourth with a seven point lead, Michel continued to grind out yards.

Josh Gordon comes through just when you wonder where he is. #NEvsNYJ

With nine to play in the game, Michel found the end zone for the first time on the day to cap off his impressive performance.

Patriots go over 200yds rushing after that 24-yard run by James White:

#Patriots 216 rushing yards and counting are their most since the Jonas Gray game in 2014.

Patriots rush for over 200 yards today. Gotta win games in different ways as the season extends and winter is coming.

The defense handeled the Jets and Josh McCown for the remainder of the fourth, and the Patriots walked out of North Jersey with an 8-3 record following a 27-13 victory.

The win, coupled with a Steelers loss later Sunday afternoon, put the Patriots back in the two seed as they head home to face the Minnesota Vikings at 4:25 next Sunday.

Tom Brady today extended his records for regular season and combined (regular and postseason) TD passes by an #NFL quarterback after his 40th birthday to 51 and 59 respectively.#Patriots

Rushing Chart From Sunday's win over the Jets – which saw no negative rushes for any Patriots RB. pic.twitter.com/oYcjbu3Wm6

Patriots Receiving By Distance in New England's win over the Jets: pic.twitter.com/qaGVPZX8q2

Big day for this guy.
Big win for the #Patriots.

JE 11 getting respect from Jets and Sony Michel gets the #patriots social media respect as ⭐️ of game! #GoPats
27-13 Pats win in NY pic.twitter.com/LpWTR28bAM

If you love it… when you face resistance or opposition it will make you go harder!

By: Steve Balestrieri
"the greatest player to play the game, it means a lot. And I think it means a lot to me, too, because this is where…
22 hours ago