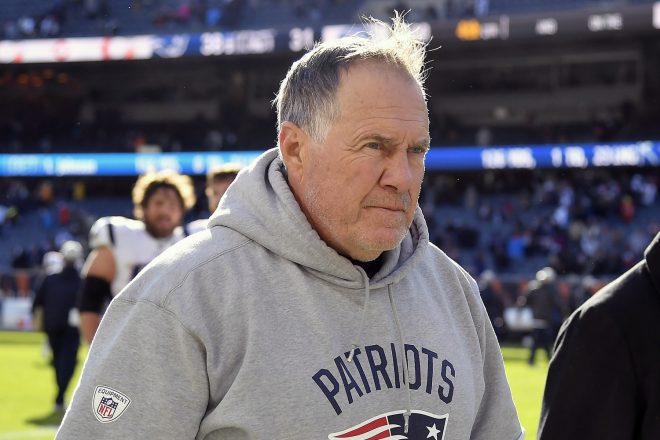 The New England Patriots needed to get out to a fast start this week against the Tennessee Titans and put the pressure on the offense which has struggled to throw the ball. That was our initial thoughts on the game but it was the Titans who whipped the Patriots from the opening kickoff until the final gun.

Tennessee dominated every phase of the game, offense, defense, special teams, and the Pats were left searching for answers as they head into the bye week at 7-3 after a really ugly 34-10 pasting by Mike Vrable and the Titans.

The handwriting was on the wall for this one right from the first play. The Patriots won the coin toss (the only matchup they’d win all day) and Tennessee promptly ran the kickoff back 58 yards to start the drive in Patriots territory. Things just got progressively worse from there.

Nothing was really working, Tennessee which came in averaging 16.8 points per game on offense, had 17 in the first 10 minutes of the game. So, rather than try to sugarcoat things or put a dress on a pig…here are our observations from this.

The game plan this week was to come out flinging it against a team that is really good at defending the pass. That’s the first clue that things were going to go awry. By the time they attempted a run, the Titans had already scored but they never gave the running game a chance and it showed in the output. The Patriots got 40 yards rushing….40 against a team, that although better lately is hardly stout. But I digress. Back to Brady.

How can you tell when Tom Brady is struggling? It is easy. He locks on to his primary target and forces the ball in there. And Brady is struggling right now. Granted the running game was awful, no Gronk and the offensive line resembled 2015 with constant shuffling, but this was bad.

Brady locked on to Julian Edelman who played a heckuva game (and took a worse beating) on 4th and 6. That was courtesy of Marcus Cannon who jumped on 4th and 1. Edelman was blanketed by Logan Ryan. James White was open and Chris Hogan was wide open after juking Malcolm Butler on a double move.

Brady was off all game and despite heavy pressure, had several throws go haywire when he had time to throw. He seemed to be shutting Hogan and Dorsett out. That isn’t good. Most of the passing yardage went to Edelman or Gordon. Edelman finished with 104 yards, while Gordon had four catches for 81 yards, but on 12 targets.

Remember all of the pre-game talk of Butler being a sucker for the double move? The Patriots avoided Butler today for much of the game. Either they thought he’d morph into vintage Darrelle Revis this week, or they felt like he had too much help over the top. But they avoided him like he had the plague. Granted he didn’t play a ton, but when he was in the game, you would think he’d be the guy that they’d target, even in zone coverage.

Instead, they forced the ball all game long against Adoree Jackson and Ryan. We’ll have to go back and watch the tape again, but for Josh McDaniels to barely challenge Butler given the struggles he’s had was puzzling at best.

Hopefully, the answer will be inside the All-22 tape.

The Offensive Line  Was Constantly Shuffling and Awful:

Brady was under duress all game long, and Tennessee wasn’t exactly known as a big pass rush team. Shaq Mason was out, Marcus Cannon was in and out. Ted Karras got exposed a bit as did LaAdrian Waddle on Sunday. So with the pass blocking a negative, the run blocking was worse.

There was precious little running room against the Titans as the Pats barely averaged two yards a carry. Once Dwayne Allen got hurt, it made things worse. The only good runs were cut loose when James Develin would hit someone at the point of attack.

The Patriots never seemed to have a plan to run the football this week. And they didn’t.

The STs units of Joe Judge have been uncharacteristically inconsistent this year. This was the worst they’ve looked overall in many years. How bad?

Tennessee started three drives in Patriots territory….in the first half. Stephen Gostkowski missed a 52-yarder wide left, the coverage units were awful and they did very little in the return game. The best starting field position for the Pats was the 35.

Shoddy tackling, blown assignments, and penalties….nope it can only go up from here.

Stephon Gilmore has been outstanding all season, since minicamp. But he was awful today, the Titans went after him with Corey Davis, and Davis totally dominated that matchup. Davis torched the Pats (and mostly Gilmore) all day long.

Gilmore got flagged twice for interference and was beaten cleanly for a touchdown. Obviously whatever malaise was infecting the other 45 players today, had an even bigger effect on the Patriots star corner. He had that kind of rough outing.

He was hardly alone, the defense was gashed by Marcus Mariota who constantly made very good throws. The Titans came in averaging 178 yards per game thru the air.

So with this kind of outing, the Pats chances of getting the top seed just took a huge blow. They limp into the bye week at 7-3 after not really ever showing up for this one. The coaches need to do a lot of self-scouting and having the team come out flat three times …all on the road this year is a coaching issue.

By: Robert Alvarez
Devin McCourty will appear in his 200th career NFL game on Thursday night against the Buffalo Bills, Robert Kraft honors his milestone.
29 mins ago

By: Robert Alvarez
Robert Kraft lends the Patriots team plane to the University of Virginia so its players can attend the funerals of fallen teammates.
57 mins ago