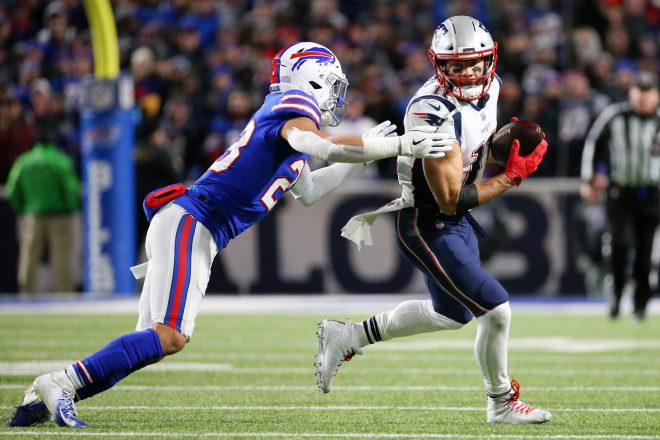 “In every battle there comes a time when both sides consider themselves beaten, then he who continues the attack wins.”

In the first quarter, the Buffalo Bills play calling turned some heads to begin the night. As Bills offensive coordinator and former Patriots coach Brian Daboll attempted to throw the Patriots defense off early.

The Bills are running the wildcat early in this game. Brian Daboll getting weird against his former team. Dig it.

Bills calling plays like they got nothing to lose. Why not? Patriots will now sideline adjust.

Screw it, this is entertaining. #Bills are drawing up the crazy, nothing to lose. This is fun. And the expiration date on that gadget stuff comes very quick. It is what it is, will have to settle into regular football here shortly. #Patriots #Bills #NEvsBUF

After a punt to begin the game, quarterback Tom Brady did whatever it took to keep the next drive alive, even if it meant trying to block.

Tom Brady is a better blocker than Travis Kelce. pic.twitter.com/4RlS9dmN74

Tom Brady on his blocking: “I was more like a speed bump. Not necessarily a block.”

Of his "block" to help spring Julian Edelman's run that converted a third-and-2 situation, Tom Brady called it a "speed bump … I just tried to get in Lorenzo Alexander's way, but he's a big strong guy, I'll tell you that." https://t.co/cy4W3hy4AS

Tom Brady on his block:

“I was like a speed bump. That’s my assignment actually. It was just good to get Julian around. I think that was a 3rd down play. Anything we gotta do to gain yards and 3rd down conversions and win the game. That’s what is most important.” #MyQuarterback pic.twitter.com/1Hm510avOi

The drive ultimately setup a Stephen Gostkowski 25 yard field goal for the first points of the game.  3-0 Patriots after one.

In the second, Brady also showed off his running ability.

So to recap, a block and a run for Brady in the game already.

TB12 throwing blocks out there and running for first downs. #NEvsBUF

Unfortunately the offense continued to struggle against the Bills defense, as they could only muster two additional field goals.

In the second half, “Bills Mafia” made their presence known following some unwanted items ending up on the field of play.

As the Patriots offense continued to find a groove, the defense kept them in the game as defensive end Trey Flowers had a monster game.

Van Noy has done it all tonight. Strip sack, shut down the wildcat sweep. Such a solid backer. #NEvsBUF

With the score cut to three following a Stephen Hauschka 51 yard field goal, Buffalo’s own Rob Gronkowski struck back.

The offense again stalled in the end zone as Gostkowski tacked on his fourth field goal of the night to up the score to 12-6 after three.

In the fourth quarter with the score surprisingly low and the Bills right in the game, Brady looked to running back James White and wide receiver turned back Cordarrelle Patterson to finally get something going.

James White from a yard out for six and the Patriots first touchdown of the game to open it up to 18-6 with 10 minutes to play.

Trailing by 12 with six minutes to go, any hope of a Bills comeback was quickly dashed following a pix six from safety Devin McCourty, the first points scored by a Patriots defense in 40 games.

What a read by .@McCourtyTwins Read the QB like an open book. House call! #GoPats #NEvsBUF

From @ESPNStatsInfo: The Patriots hadn't scored a defensive touchdown since Week 17 of 2015. They went 40 games without one.
The 40-game streak was the longest active streak in the NFL entering the night.

That 94 guy was going atleast 21mph then lol https://t.co/Y7pMZPLPWA

The 84 yard interception return for a touchdown all but closed the book on a week eight 25-6  victory for the Patriots who move to 6-2 in 2018.

The Patriots head home with a four game winning streak to take into next Sunday nights highly anticipated game with Aaron Rogers and the Green Bay Packers.

The way to go on the road.

A pick-6 and a victory shout out from @mccourtytwins! pic.twitter.com/9ADDIwqySB

Great team win. Ready to get home and get some rest for this week! Go pats

I know it’s late… but 6-2 feels good!! Another one (DJ Khaled voice). Had to S/o the homies @21Blackking And @QRich tonight!!! #twotaps #patsnation

Getting home and realizing the wife did it for you pic.twitter.com/qCV6qsL7lK