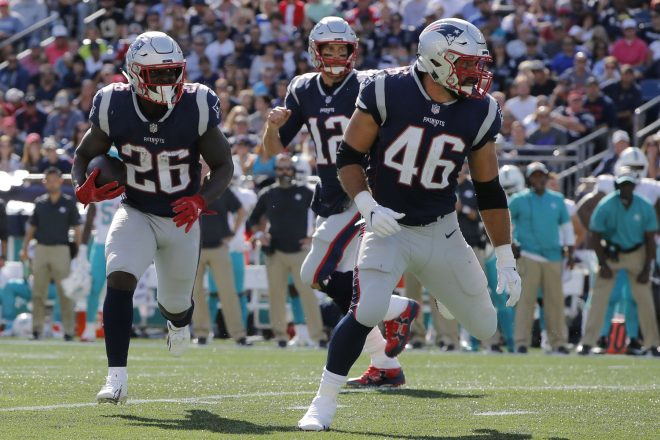 The Patriots looked much more like the team that we are accustomed to seeing on Sunday afternoon in Foxboro. They played their best complete game in quite some time with a dominant, offensive and defensive effort. While it is only one game and they have to start stringing some games like this together, this was exactly what the doctor ordered.

Miami entered this week 3-0 and with a two-game lead in the division and with a chance to go up by three with a tie-breaker. They had been playing well and the Patriots had looked terrible for two weeks in a row.

But the coaches put together an outstanding game plan and the players executed it in fantastic fashion. The team came out immediately, energized, with a tough physical presence and a sense of urgency that has been sorely lacking in a while.

This one was over by halftime with the Pats up 24-0 and then they just put it on cruise control the rest of the way. It was a great game offensively for Sony Michel and James White, with Josh Gordon having an impact immediately. Defensively, Lawrence Guy and Kyle Van Noy were outstanding as the defense pitched a shutout for 57 minutes.

So, check out our grades and see how the team fared in this week’s blowout win.

Tom Brady got off to a bit of a slow start but got the passing game going and he ended up with 274 yards and three touchdowns. This was on a day where the running game was gashing the Dolphins defense. But his two picks hurt his overall grade, where each was preventable because of uncharacteristic mistakes.

But he did get the wide receivers going, hitting a 55-yard touchdown pass to Cordarrelle Patterson for his first Patriots touchdown. A nice 9-yard dart to Phillip Dorsett for another score. And he lasered a third-down pass to newcomer Josh Gordon on a slant for a 13-yard gain to get him his first reception on the team. And his best pass of the day was a gorgeous rainbow pass to James White in the corner of the end zone where he was getting drilled as he released it. Just like they draw it up in the bucket drill during camp.

But his two picks were preventable. On the first, he got fooled when Bobby McCain was running with Chris Hogan. Dorsett was to cut under the Hogan route, where it was supposed to generate some open space. But McCain passed off Hogan to a deep safety and sat down right on the spot that Dorsett was crossing. He made a very good head’s up play. On Brady’s second INT, he was just trying the force the ball into a very tight, well-covered window. Miami had two defenders located right there while under a heavy rush. He also threw a high pass on the goal line to Patterson which was knocked away and nearly picked. Normally,  Brady delivers that ball low where it can’t be deflected and only catchable by his man.

The Patriots running backs had a fantastic productive day.  Sony Michel, who last week had to hear in some circles that he’s already a bust, had he first 100-yard day and NFL touchdown. He rushed 25 times for 112 yards and is beginning to show the trademark burst that he was known for in college.

A cool stat courtesy of Tedy Bruschi, 65 yards of Michel’s 112 came after contact. He’s also seeing the field much better as he becomes more comfortable in the offense.

James White had 112 total yards of offense, with 44 yards rushing including a nice 22-yard touchdown run and 68 yards receiving including the beautiful aforementioned rainbow from Brady for a score. He also ran a perfect rub route on Patterson’s 55-yard TD catch which freed up the receiver for an easy pitch and catch.

James Develin was his usual solid self in the running game, delivering big blocks to get the backs to the second level. Kenjon Barner got some work in at garbage time and got some snaps in which may set the table for more work down the road.

The wide receivers had a much more productive day. The arrival of Josh Gordon and his small sample size (18 plays), belied his influence on the field. While he had just two catches for 32 yards, both were on third down and Brady made it clear he was not just a decoy. He also drew a penalty that resulted in another first down and made a nice block downfield on White’s TD run. His arrival opened up some space for the other receivers. It was a good start.

Phillip Dorsett and Chris Hogan are complimentary type receivers and not the #1 types that they been forced to assume early this season. Dorsett had four catches for 55 yards including the somersaulting TD grab. Hogan had one catch for 25 yards, and Patterson had the 55-yard touchdown catch as well as an 11-yard carry.

The overall group will get even better with the arrival of Julian Edelman who was back in the facility on Monday but is not yet part of the 53-man roster as the team will have to make a corresponding roster move.

Rob Gronkowski has been bothered by an ankle injury which has limited him in practice the past 10 days. He aggravated the injury late in the game and with the blowout score was taken out. He’s considered day-to-day but with the short week, it would seem that he is doubtful to play this week.

Gronk had a couple of good catches in traffic and ended up with 4 catches for 44 yards on the day. Dwayne Allen had a very good day in the run blocking department as he was clearing house for the backs. He was targeted on a deep route that was knocked away and caught a pass behind the line, that perhaps Brady should have thrown away where the Dolphins were all over him for a loss.

The offensive line had a tremendous bounce-back day. After being manhandled for two straight weeks, a little home cooking was just what the doctor ordered. Dante Scarnecchia’s crew took it to the Dolphins front seven and the Patriots running game carved them up for 175 yards on the ground.

Unlike the past few games where they couldn’t open up holes, they were getting a good push and did a very good job of protecting Tom Brady. Miami has a pair of outstanding edge rushers in Cameron Wake and Robert Quinn and both had quiet days which is a big win for New England.

The defensive line simplified things a bit and rather than being reactive and pushed around, they were setting the tone of things and dominated up front.  After getting gashed two weeks in a row, the run defense allowed the Dolphins only 56 yards rushing, most of which long after the outcome was settled. Miami averaged 3.1 yards per rush.

Lawrence Guy had an outstanding game inside, Malcom Brown was much improved and the line was bolstered by the return of Trey Flowers who is always very solid. The Patriots did a great job of pushing the pocket and collapsing it around Ryan Tannehill. He frequently couldn’t step into his throws, which is why so many sailed high for him.

The unit only had two sacks, one by Adam Butler and one by newcomer John Simon but they had good pressure all game long around the QB’s feet.

This was a fantastic day for the Patriots linebackers despite them barely registering on the stat sheet. The linebackers were active, chipping the Dolphins receivers, tight ends, and backs and looked quite the antithesis to the slow, plodding group that we saw for two weeks.

Kyle Van Noy was outstanding all game long mixing in run and pass coverage.  He recovered a fumble when the Dolphins backup center snapped the ball over Tannehill’s head before he was ready. Elandon Roberts was playing his downhill, thumping game and was a thorn in the backfield before he was injured late in the game. Dont’a Hightower had a very active, physical game.

One way to combat their lack of speed is to chip the backs and receivers off the line. On Sunday that was the game plan and they worked it to perfection. The Dolphins speed was negated and their backs and tight ends were not a factor. Dolphins running backs had just three catches for 29 yards, and two of those came in garbage time.

The secondary played their best game of the season and arguably their best in quite some time. The game plan was to get physical with the Dolphins receivers at the line of scrimmage. This was conducted to throw off their timing as well as negating their team speed.

The game plan worked to perfection as the Dolphins wide receivers were blanketed by the Patriots secondary all game long. Tannehill had nowhere to throw the ball. He entered the game completing 72 percent of his throws with a passer rating of 121.8 on the season. He finished just 11 of 20 for 100 yards with no touchdowns and an interception. The Dolphins wide receivers had 11 receptions for just 97 yards. Rookie J.C. Jackson had his first career interception.

Pat Chung was back and in this Patriots defense, he is outstanding. He is extremely versatile and can play as an in-the-box safety, cover tight ends or even play in the slot. He’s an excellent tackler and a smart savvy player. Mike Gesicki the talented rookie tight end had just one catch for 9 yards.

Cordarrelle Patterson didn’t get many opportunities to strut his stuff as the Dolphins only kicked off twice. But Cyrus Jones had a very nice 24-yard punt return at the beginning of the second quarter. The Dolphins return game didn’t do much despite having the dangerous Jakeem Grant and the always elusive Danny Amendola. Was that Danny Amendola starting to run to the Patriots sidelines after returning a punt in the first half? Ryan Allen only had to punt twice and Stephen Gostkowski had a chip shot (20-yard) FG and extra points to make.

What a difference a week makes. The Patriots had a great game plan to combat the Dolphins speed and worked it perfectly. It was a tad reminiscent of those old Patriots-Colts games of the early 2000s in the old stadium. They were physical with the Miami receivers and wouldn’t allow them any separation.

Bill Belichick had the team ready to go on Sunday.  They played with the urgency and energy that we’ve come to expect of Patriots teams. Josh McDaniels called a superb game, mixing in the run and pass perfectly.  He was calling the right plays to get everyone involved. The offense for the first time this season looked like the offense that we expected to see.

This overall was a very solid team win. Now they have to start stringing a few together. They have a short week with Indy coming into Foxboro on Thursday night.  Then they will have 10 days to come up with a game plan to slow down the Chiefs offense.

By: Mark Morse
Both games are in the books and we have learned about several players we have not seen play.  The practices leading up to the games…
9 hours ago