3 years ago at 9:44 pm ET
Follow @IanLogue
Posted Under: Uncategorized

After two straight losses, the Patriots sent a clear message on Sunday against Miami that they’re still a force to be reckoned with during their 38-7 blowout victory over the Dolphins.  Here are a few things we came away with following the win.

1) Defense came up big on Sunday – The return of Trey Flowers and Patrick Chung saw a much-inspired performance by New England’s defense on Sunday, putting up one of the most impressive showings we’ve seen so far this season.  The Patriots pitched a shutout throughout much of the contest, until Miami managed to score a touchdown with just under 3-minutes left in the game to spoil that effort.

But the first-half totals were impressive as the Patriots took control of this one early.  Despite allowing a 22-yard reception to Kenny Stills at the start of the game, the Patriots imposed their will after allowing just four plays of over five yards throughout the entire first half, and had Miami in 3rd-and-8 or longer in all but one 3rd down in the first two quarters.  The Dolphins were 1-of-6 over that span, with their one conversion coming as time expired before the half while the Patriots were in a prevent defense.

Overall, the Patriots made them miserable, with Miami finishing the afternoon 3-of-11 on third down while Dolphins starter Ryan Tannehill closed out the day with just 100-yards passing before Miami pulled him late in the day in favor of back-up quarterback, Brock Osweiler.  They also controlled the Dolphins’ ground game, holding Miami to just 7 first-half yards rushing and just 56 total rushing yards overall.

Bill Belichick said after the game he was pleased with the team’s energy and effort against a Dolphins team that had been playing well prior to this game.

2) Nice First Showing For Gordon – For anyone wondering what type of impact Josh Gordon would make during Sunday’s game, his mere presence made a difference as the Patriots passing game was much more effective.

Gordon played in just 18 snaps Sunday but showed some terrific quickness and he forced defensive players to be mindful of where he was on the field.  Interestingly enough, the newcomer finished with 2 catches for 32-yards, both of which came on third down and contributed to two scoring drives for the team.

His success seemingly drew the attention of the defense and it felt like there was better spacing out there for New England’s receivers compared to the previous two weeks.  It’s only one game, but he seems like he’s settling in well and after Sunday it looks like he might have a good future ahead of him.

“He’s put in a lot of work, a lot of time trying to understand where to line up and what to do, and he came up with some big plays today,” said Brady.  “He kind of got us going in certain areas. Everyone played pretty good who was out there today, so it was great to have him out there.” 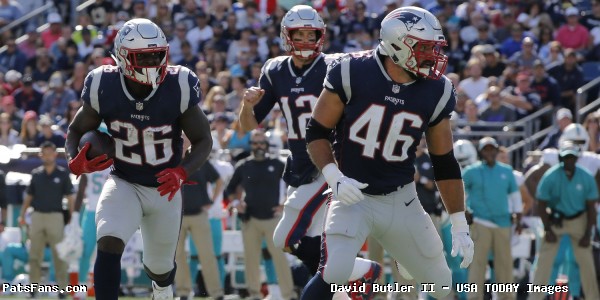 Michel had a nice afternoon against the Dolphins Sunday.

3) Great performance by Michel – Following a week of unwarranted criticism, rookie running back Sony Michel responded in a big way after going out and putting together another solid performance against the Dolphins.

Michel, who finished with 112 yards on 25 carries (4.5 avg) along with a touchdown), ran the ball well, finishing with three rushes of over 10 yards including 1 of over 20.  He also scored the Patriots final points of the game thanks to his 10-yard touchdown run, the first of his NFL career, at the beginning of the fourth quarter.

It was a great showing for a player who after his first career 100+ yard outing is slowly emerging as a weapon in New England’s running game, becoming a threat that opposing defenses are going to have to pay attention to this season.

“I mean, really hard and broke some runs out there. I mean, that’s a stout defense, and we needed the run game to break some of those,” said Brady. “So, I thought the line did a great job up front making some holes and it was a great day.”

4) Quiet day for Amendola – Former Patriots receiver Danny Amendola likely hoped to have a big day on Sunday in his return to Gillette Stadium, but New England’s defense did a good job of keeping him out of the mix.

Tannehill targeted Amendola early, with the receiver’s number being called on the second play of the game where he picked up three yards during Miami’s first drive of the afternoon.  Unfortunately for the Dolphins, an offensive holding play on the next snap killed their drive and they would later be forced to punt.

Amendola’s best play of the day came just after the Patriots went up 31-0, with Tannehill hitting the veteran receiver for an 18-yard gain to get them out near midfield at the Dolphins’ 42-yard line.  But three plays later, Tannehill threw an interception to J.C. Jackson, which ended the threat before it ever really got started.

Amendola came into the game with 11 receptions for 100-yards but was held to just two catches for 21-yards during Miami’s first loss of the season.

After the game was over, Amendola met up with Brady at midfield but was clearly disappointed in the outcome when he spoke to the media following the loss.

“We didn’t get it done today,” Amendola told reporters after the game. “We got to look at film, see what we can learn. It’s a great learning experience for us. We’re 3-1 and we’ve got to get better. So back to work this week and get ready for our next game.”

White More Involved This Week – One big topic of discussion this week had to do with getting James White more involved in the offense and on Sunday, that seemed to be the plan.

The running back carried the football 8 times for 44 yards (5.5 avg) including a touchdown and he also led all Patriots receivers with 8 receptions for 68-yards along with a receiving touchdown.  He also finished with a team-leading 3 third-down receptions all of which moved the chains, including his touchdown.

White’s touchdown reception ended up being one of Brady’s favorite plays of the day, with the quarterback managing to stand in under pressure and put up a perfect high-arcing throw that White was able to come down with.

Brady told reporters he didn’t get to see the play as he was blasted down after he released it but said he felt good about White’s chances to come down with it after he let it go.

“I knew where he was running and I knew I didn’t have much time to wait for him to get there, so I just tried to flip it up there to the back corner,” said Brady.  “Right when I let it go, I thought, ‘We’ve got a shot.’ And I kind of looked under some legs and saw him put his arms up and make a great catch. So, it was pretty sweet. Those are fun ones.”

With Michel’s emergence in the ground game and White continuing to be a dangerous playmaker for the offense out of the backfield, along with Gordon’s performance in his first game, the Patriots seemingly find themselves in better shape offensively with Julian Edelman set to return this week.  That may be important as tight end Rob Gronkowski left the contest with an ankle injury, which could challenge his availability for the team’s match-up against the Colts Thursday night.