4 years ago at 8:38 am ET
Follow @bob_george
Posted Under: 2018 Patriots Regular Season 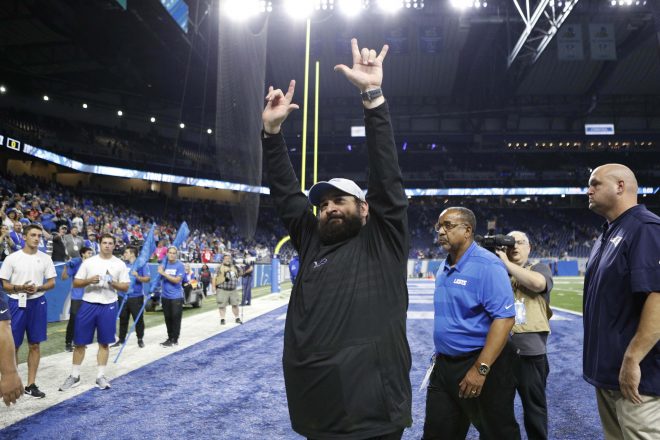 Instead, the Lions exposed the Patriots as paper thin, mostly on defense, and quite possibly a significantly poorer football team than they have been in literally over a decade.

The Patriots generally play their worst game of any given season on Sunday nights. This latest one might only be one of them, since they have an upcoming Sunday night game at Kansas City, a city where they win even less than Denver. The Patriots sold out in preventing Matthew Stafford from beating them through the air, and as it turned out, the Lions got their first 100-yard rusher in five years. The final score was 26-10 Lions, and the Patriots left Ford Field a beaten team in search of answers to many questions.

One takeaway from this loss which may leave Patriot Nation gnashing their teeth is that despite a lousy first half where Detroit had a 13-minute advantage in time of possession, the Patriots were only down ten points at 13-3. Then they begin the second half with a Ja’Whaun Bentley interception, and Tom Brady cashed it in with a beautiful 10-yard touchdown pass to James White to make it 13-10. It seemed that the Patriots were poised for a dominant second half against a Detroit team that basically laid two eggs in each of their first two games.

On the ensuing drive, Deatrich Wise Jr. sacked Stafford for a seven-yard loss on the first play. But the Patriots were not able to get off the field, as somehow Stafford was able to find Kenny Golladay for 16 yards and a first down. Stafford managed to lob a touch pass over Jonathan Jones, and that first down turned out to be the key play of the night for Detroit. The Lions went on to score, with Stafford hitting Marvin Jones on a deep crossing route for 33 yards and a touchdown. On the play, Stephon Gilmore and Duron Harmon miscommunicated, and Gilmore was left to chase Jones in futile pursuit.

School was basically out after that touchdown. The Patriots went three and out on four of their next six drives and mounted next to nothing on offense all night long save for the one touchdown drive. Brady seemed to have nobody that he could count on all night long. Matt Patricia, who earned his first win as an NFL head coach against his former team, had the right defense on Rob Gronkowski for most of the night and the all-world tight end was never a factor.

Still, despite the shortcomings on offense, it was the defense that seemed to be the weaker unit. Detroit didn’t punt the ball until the second drive of the fourth quarter. The Lions scored on five of their first seven possessions, stopped only by the end of the first half and the Bentley interception. With Trey Flowers, Patrick Chung and Eric Rowe sidelined, the Patriots looked anemic and weak. Chung wasn’t there to play quarterback on the touchdown bomb to Jones. Flowers wasn’t there to stem the tide on the Lion rushing attack. Overall, the Patriots just couldn’t get off the field on third down as the Lions were 7 for 14 on third down conversions.

Most alarming was the fact that the Patriots needed to stop the Lion run attack and instead allowed it to be the linchpin to Detroit’s win. Kerryon Johnson, a backup running back who will never be confused with Barry Sanders, finished with 101 yards rushing on 16 carries and a 6.3 yards per carry average. LeGarrette Blount induced more Blount Force Trauma on his former team with 48 yards on 16 carries. Johnson became the first Detroit back since Reggie Bush to top the 100-yard mark. The Patriots failed miserably in what seemed to be the focal point of their defensive game plan, as they were beaten consistently off their blocks all game long and looked tired most of the game. Unlike last week in sultry Jacksonville, the Patriots cannot blame the hot weather in the air-conditioned climate of Ford Field.

Stafford finished 27 of 36 passing for 262 yards and two touchdowns. He was sacked twice and finished with a rating of 101.9. Golladay and Golden Tate each had six receptions, while both Tate and Jones finished with 69 yards receiving. Give the Patriot defense some credit as Detroit was held to Matt Prater field goals four times, but Stafford normally doesn’t fare this well against top tier NFL teams.

Brady’s numbers were more pedestrian. He finished 14 for 26 for 133 yards, one touchdown, one interception (a deep ball in the fourth quarter which was hauled in by Darius Slay), and a rating of 65.1. Gronkowski did manage four catches for 51 yards, both team highs. Brady had literally no one else to go to outside of the touchdown throw to White. Most damaging was Phillip Dorsett, who was targeted five times and had zero catches. Rookie Sony Michel had 50 rushing yards on 14 carries, averaging 3.6 yards per carry.

With Miami coming to town next week, the Patriots had better hope that the Dolphins don’t pick next week to unleash some new offensive wrinkle (recall the 2008 game in Foxborough which introduced everyone, including the Patriots, to the Wildcat). This game presents an unlikely early season must win for the Patriots, because the Patriots cannot afford to fall 3 games behind the Dolphins in the standings. In this final game of Julian Edelman’s suspension, the Patriots will have to come up with some quick answers to some questions that may take longer to answer and fix.

Patricia finally gets his moment of triumph after two horrid games. This wasn’t the week that you wanted this to happen to Patricia. But the game showed that maybe it isn’t only a dearth of players that have hurt the Patriot defense. Seeing their former coach on the other sideline answers a few of those tricky questions that need answered.