4 years ago at 7:01 am ET
Follow @SteveB7SFG
Posted Under: 2018 Patriots Regular Season 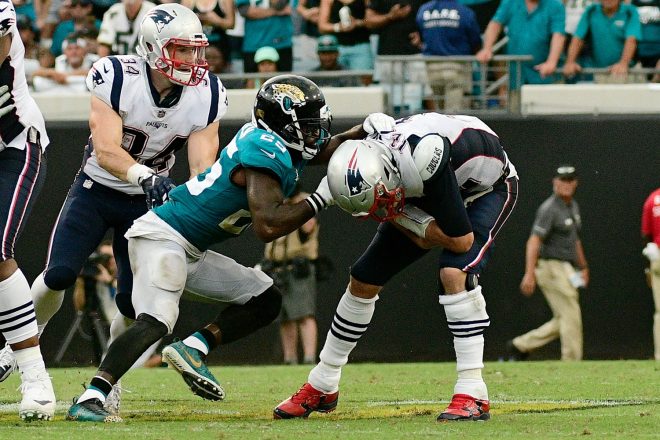 The Patriots road trip to Florida went exactly as so many others have gone in the past. They played like they left their luggage on the plane and were rushing to catch the last flight out of town. This one was ugly through and through.

There wasn’t a lot of positives to throw around, the offensive and defensive lines were pretty much dominated. The Patriots couldn’t run the ball and once again had issues stopping the run. But the pass defense was the real sore spot on Sunday. Blake Bortles had a career day as he sliced and diced the Patriots for 377 yards and four touchdowns. More yardage than they allowed thru the air in the Super Bowl….ouch.

However, the rookie Sony Michel who missed all of the preseason and the first week of the season got to get into some game action for the first time. He was obviously rusty but flashed a little bit and as he rounds into game shape, we should see some really nice production there. Jacob Hollister also got into some game action as he’s been hurt with a bad hamstring and looked good.

So, the players won’t be rushing up to garner their grade sheets after this one. I’m sure the coaches film session will be a particularly unpleasant affair this week.

Tom Brady was far from his prolific self. Although his numbers were pedestrian according to what we’ve come to expect from him, 25-34, 234 yards, 2 TDs 0 INTs, Passer Rating of 106.1, they weren’t bad either.

When Brady in his post-game talked about missed opportunities, he was speaking about himself and not just the offense as a whole. On the Patriots first drive, he had Cordarrelle Patterson across the middle wide open, and it would’ve gone for big yardage, possibly a TD with his speed. But Brady felt the pressure and threw it away and immediately knew he missed a big opportunity. It was that kind of day.

But he held the team in the game somehow and late in the game they were still very much alive when they had no business being there. That was because of #12.

The Patriots had big time troubles running the football against the Jaguars front seven and had just 82 yards rushing as a team on the day. On 24 rushes, it comes out to just 3.4 yards per carry. That isn’t going to get it down. Michel led the team with just 34 yards on 10 carries. Rex Burkhead had just 22 on six carries. James White, however, was pretty productive in the passing game catching seven passes for 73 yards.

The wide receivers didn’t have a big statistical day, catching just 11 passes for 104 yards. But Chris Hogan had two touchdown catches on the day which definitely helped. Patterson had just three catches for 18 yards but the play that Brady missed him as well as the screen pass that he lost his footing and lost yardage on a third and seven hurt. Especially since it looked like a clean transition would have resulted in a first down.

Phillip Dorsett had five catches for 44 yards and has already equaled his total of receptions from 2017. He and Hogan are fine complimentary receivers but neither is a true #1. With Julian Edelman missing two more games due to a suspension, the team is struggling to find that balance with its wide receivers in the passing game.

Rob Gronkowski was blanketed by two and many times three players as the Jaguars made it clear that he wasn’t going to beat them. Taking a page out of the Patriots book, they made it clear, their #1 target would be taken away and the Patriots would be forced to look elsewhere. Gronkowski had just two catches for 15 yards on the day.

As we noted above, Jacob Hollister had three catches in his season debut which is a good sign for him this season.  If he can maintain 2-4 catches per game, it would be a great jump in production for him from Year 1 to 2. They went away from him in the second half however.

The offensive line had a rough day overall for the offensive line. They had trouble opening holes in the running game and although Jacksonville had only two sacks Brady was under pressure all game.

The Patriots first drive ended when Yannick Ngakoue blasted in and made Brady throw it away when he had Patterson wide open across the middle. Sony Michel got hit in the backfield on a third and one snuffing out another drive. And when the team had a chance to narrow the lead to one score, LaAdrian Waddle couldn’t block Dante Fowler who stripped Brady of the ball…tough day.

Things weren’t much better on this side of the line. Trey Flowers was lost to a concussion early after he looked like he was off to a productive day. But it made no difference. The rest of the players didn’t pick up his slack. Deatrich Wise left the game with a hand injury.

Jacksonville gashed the Patriots to the tune of over seven yards a carry in the first half. And once again the right side of the defensive line was the side that opponents are attacking.

Blake Bortles had all day to throw and when they did get pressure, they didn’t set the edge allowing Bortles to escape and run for first downs.

Kyle Van Noy had a nice heads-up play with an interception of Bortles that gave the Patriots late hope but otherwise, this was a rough outing for the Pats LBs.

Rookie Ja’Whaun Bentley struggled in coverage and when he was used on the blitz. Dont’a Hightower was largely ineffective and was coming off the field on passing downs, leaving Bentley and Van Noy out there.

Corey Grant once again tortured the Patriots running and catching the ball out of the backfield. That is on the linebackers.

Stephon Gilmore had two splash plays, punching the ball out of D.J Chark’s hands for a fumble and made a nice tackle, taking down Bortles just short of the sticks on a third down scramble. But beyond that, the secondary was torched, repeatedly, all over the field.

The Jaguars crossing routes gave the secondary fits, as they’ve never seen it before. Eric Rowe got torched, benched, came back for one play and got lit up for another 20+ yard reception…

The safeties were late in getting there to help and when the team went to zone, there were huge gaps that Jacksonville exploited. Pat Chung left with a concussion.

Cordarrelle Patterson got one Kickoff return in for 25 yards but we’re still waiting to see him make a difference there, hopefully soon.

A block in the back set the team back on the opening kickoff and the return units still need some work.

Bill Belichick has one stinker every year early in the season and hopefully, this is the only one. The Patriots weren’t ready for Jacksonville to come out slinging the ball and seemed helpless to stop it.

The offense seemed to move the ball well early but a curious call, running on a 3rd and 5. Perhaps Josh McDaniels saw something and they just didn’t execute, which is why he ripped the team after the first quarter.

The defense and Brian Flores….this was a bad one and they need to seriously regroup this week and put together a much better effort. Because this one was awful. There is a lot of work to be done, on both sides of the ball. But it is early in the season, and these types of struggles aren’t unheard of. Everything right now is fixable.