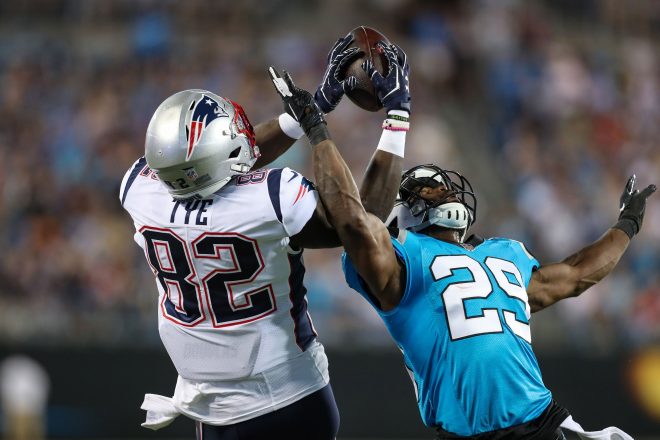 After all of the draft preparation, OTAs, mini-camps, training camps and three preseason games, it all comes down to the final preseason game for the fringe players on the rosters for both the New England Patriots and the New York Giants. Most of the players who will see action tonight won’t make either team. And many will be playing in the final game of their NFL careers.

For many others, they’ll be trying to create as much good tape as they can as a demo for the 31 other teams in the league to garner a practice squad invitation and a chance to further their NFL dreams.

The starters, especially the quarterbacks, Tom Brady and Eli Manning will not see the field and watch from the sidelines until the games are for real beginning next week. In last year’s finale, also against the Giants, the Patriots used 38 players.

Other than the long snapper Joe Cardona, punter Ryan Allen, and kicker Stephen Gostkowski, who had no competition in camp, only seven of those players made the 53-man roster. Only one of the fifteen players on defense in last season’s finale against the Giants made the roster, DE Geneo Grissom.

However, for those few players that are trending up as the preseason winds down, this final audition can make a big difference. Bill Belichick spoke about that earlier this week.

“We evaluate everything, but if there’s a rising trend, that carries a lot of weight,” Belichick said on Tuesday. “So, this is the last opportunity. If guys that have been improving the last couple weeks can add onto that, it will absolutely help them. It could help them a lot.”

The game will be broadcast locally on WBZ-TV in Boston with Bob Socci, doing the play-by-play, Scott Zolak handling the color commentary and Rob Ninkovich and Steve Burton handling the sideline reporter duties. Andy Hart and Paul Perillo from PFW will be live in the studio offering instant analysis as well.

So from a New England perspective, here’s what to watch for when the Giants and Patriots meet again to end the preseason.

Who’s Starting on Offense, Defense: There will be plenty of decisions to be made at the bottom end of the roster. Most of these players will be left out of the final roster cuts but a few may be looking to get at least practice squad consideration. Among them are:

RB Ralph Webb – Webb was a dark horse candidate to make the squad given the depth that the team had at the position when training camp began. But Webb worked hard and in his limited snaps in practice played well. He had a very impressive debut against the Redskins in the first preseason game. Since then, he’s been nearly invisible. It could mean that the team will likely try to hide him on the practice squad.

The Patriots added RBs Kenneth Farrow and Khalfani Muhammad this week. Look for them to get a lot of work in the game as an audition for other teams. Webb? Not so much tonight.

RB Mike Gillislee – The veteran back who was a starter at the beginning of 2017 is likely gone. Jeremy Hill has (in our opinion) clearly outplayed him and is a bigger factor in the passing game, something the Patriots value highly in their backs.

He still has a shot at making the roster if the injuries to Sony Michel and Rex Burkhead are deemed long-term, although both returned, albeit limited, to practice this week. He’s auditioning for another team.

QB Danny Etling – The Patriots late-round draft choice is another player who hasn’t seen much of the field since the opener. Has he shown enough development in practice to warrant a practice squad spot? The feeling here is yes. He may go wire to wire tonight at QB, with a chance to show what he can do.

WR Devin Lucien – Lucien has made the rounds in the last year. He was with the Patriots in camp and then bounced around with several team’s practice squad a year ago before making his way back to New England this summer.

He’ll probably be the most targeted receiver in tonight’s game, but his chances of cracking the 53-man roster are pretty low.

On defense, there are plenty of decisions that likely have to be made and many of the players still in competition for roster spots may get a final look. Among them are:

DB Jason McCourty –  The move to safety was an intriguing one, was it a good or bad sign? Opinions seem to be mixed on that subject. I think if we see a lot of him on the field it will not be a good sign for the veteran to make the team.

DE Trent Harris – “Toolbox Trent” from Miami has had a difficult time getting thru the deep group of edge players to get significant snaps this summer. But when he’s been on the field, he’s been productive. He’s someone who may get snapped up by another team after the cutdowns are made.

LB Christian Sam – The “other” linebacker taken in the draft is athletic but hasn’t had nearly the impact that fellow rookie Ja’Whaun Bentley has had this summer. He’ll be looking for a performance that will convince the coaches that he’s worth developing long-term and may end up on the practice squad.

DE Keionta Davis – The first-year player has turned some heads with his play this summer. He’s far from a finished product but certainly has shown potential. The feeling here is he’s close to making the 53-man roster, so he may be one of those players who the coaches want a final look at.

Crowded secondary – The Patriots have a few difficult decisions to make in the secondary. Both Jonathan and Cyrus Jones have returned to full duty and Jonathan, I believe is a lock to make the roster. Cyrus however, is a different story.

With the uncertainty in the return game, his special teams’ versatility may be the difference in him getting a roster spot.

The team also has rookies J.C. Jackson, Keion Crossen and practice squad player Ryan Lewis in the mix. All of these players have a legitimate shot at making the roster and tonight’s game may be the difference in who stays and who goes.

Corey Bojorquez – The UDFA rookie punter hasn’t seen the field in one preseason game yet. Bill Belichick and ST’s coach Joe Judge kind of danced around the subject of “Bojo” but the feeling is that they don’t want any tape on him to risk losing him to another team.