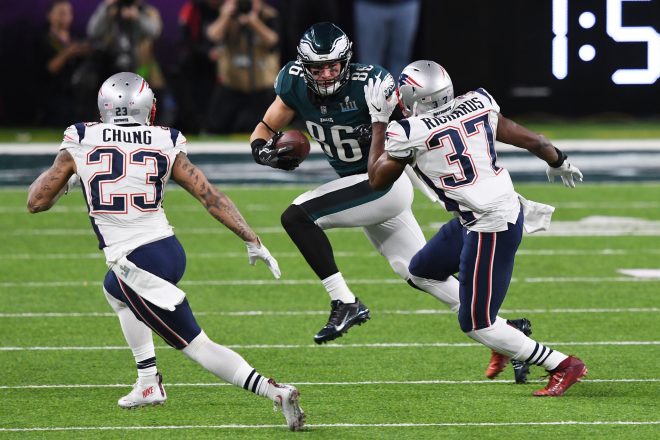 When the Eagles face off with the Patriots in their preseason “Super Bowl rematch” on Thursday, many fans traveling down Route 1 to Gillette Stadium will find themselves staring right at a billboard that contains artistic imagery of what happened in the previous meeting.

The whole idea started in June when an Eagles fan from Massachusetts named Gina Lewis sent out a tweet that she had a bet with her coworker over putting an image of Brandon Graham forcing Tom Brady to fumble on a billboard. The tweet needed 4,100 like and 3,300 retweets.

After some Eagles players found out and retweeted it, Lewis met her goal with ease and the billboard was then drawn up by a local Philadelphia artist.

Here it is, My official Billboard painting going up in New England this coming Monday❗️Displayed on the only road to Gillette stadium- This is going to be epic 🙌 – Eagles Nation share this everywhere 🦅✍🏼 @SportsRadioWIP @975TheFanatic @PatGallenCBS3 #FlyEaglesFy #ganggreen pic.twitter.com/Kz2OnS3sdV

According to an article in Sports Illustrated,  “Lewis launched a GoFundMe campaign to pay for the $5,000 cost of putting the billboard up, which was a rousing success. (The campaign remains active, now seeking an additional $5,000 to donate to Carson Wentz’s AO1 Foundation.)”

The billboard is located near the Foxborough McDonalds at the intersection of Route 1 and North street.