During the spring, the team at times kept him out of some drills, but it seemed more precaution than anything else. In the limited amount of time we were able to watch him, he looked like….Julian Edelman. Quick, able to cut on a dime and nearly impossible to cover in the short passing game.

But now the team will miss him the first four games against Houston, Jacksonville, Miami and Detroit and make no mistake, despite being able to hum along without him last season, this is a big loss for the first quarter of the season. 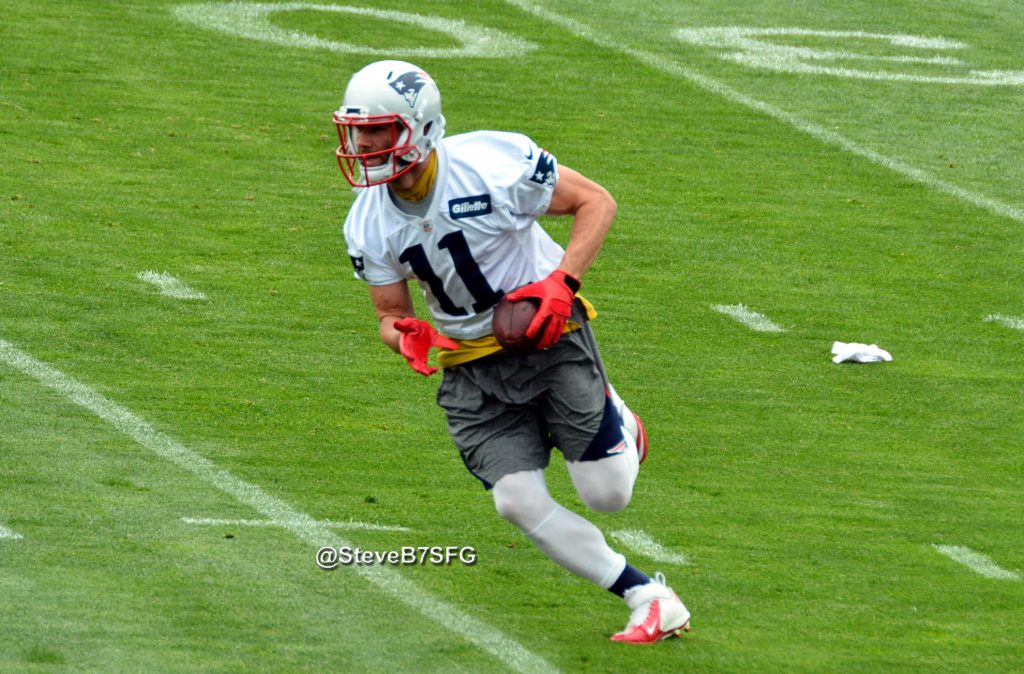 The offense lost three of its biggest playmakers as Danny Amendola and Dion Lewis left in free agency and the team traded Brandin Cooks to the Rams. So at wide receiver, the depth chart consists of Chris Hogan and a lot of question marks. While there is no denying the talent level is there with players such as Jordan Matthews, Kenny Britt, Phillip Dorsett, Cordarrelle Patterson, rookie Braxton Berrios, as well as the battle-tested but oft-injured Malcolm Mitchell, they haven’t worked for long in the system and the unknown element persists with all of them.

The suspension now may change how they look at training camp and the preseason. Edelman will be gone for the first month of the season, they’ll have to juggle, getting him all the way back with a balance of limiting his workload initially.

This suspension will no doubt put more pressure on tight end Rob Gronkowski and the running backs to produce more in the passing game. With Rex Burkhead and James White back in the fold, the team will look to Sony Michel to add that level of playmaking ability to both the passing and running games in 2018.

The loss of Edelman for that first month of the season, where the Patriots are normally slow starters is a big loss, there is no getting around that. But it opens a window of opportunity for the other players to step up and for at least one of them, it may lead to a four-week reprieve that could lead to him becoming a regular part of the offense.

We wrote on Sunday that the snaps in the slot are now wide open and up for grabs. Mitchell would be the first choice to snag them up but his health is a big question mark right now. Berrios and 2nd-year practice squad player Riley McCarron seem cut from the prototypical Patriots slot receiver mold, and they’ll have plenty of opportunities both in practice and in four preseason games to turn the coaches heads and carve out a role for themselves.

Our money here is on Jordan Matthews who has been able to thrive in many different offenses so he’s able to learn a new one and become productive right away. He brings a different element to the mix, he’s 6’3, so he presents a much larger target especially in the red zone.

Of course, this puts more pressure on Tom Brady and the soon-to-be 41-year-old QB has always been equal to the task. He’ll be operating without two of his best friends and most trusted receivers in Amendola and Edelman but something tells me he’ll be able to weather the storm until Edelman returns in  Week 5 and the newer players find their rhythm in the Patriots offense.

It won’t be a walk in the park and at times they may struggle, as they always do early in the season. That’s what makes every year so different, so compelling and ultimately so much fun to watch.

But nobody circles the wagons better than the Patriots under Bill Belichick and are able to block out the noise and get all 53 men pulling in one direction. Is the loss of Edelman for four games a huge loss? Absolutely. Is it a crisis that will bear close scrutiny? Yes again. But this is where the wheat is separated from the chaff and this is where the great step up to the forefront. JFK once wrote:

“When written in Chinese, the word ‘crisis’ is composed of two characters. One represents danger and the other represents opportunity.”

I’d place your bets on #12 getting it done this year even without Edelman for the first month of the season.