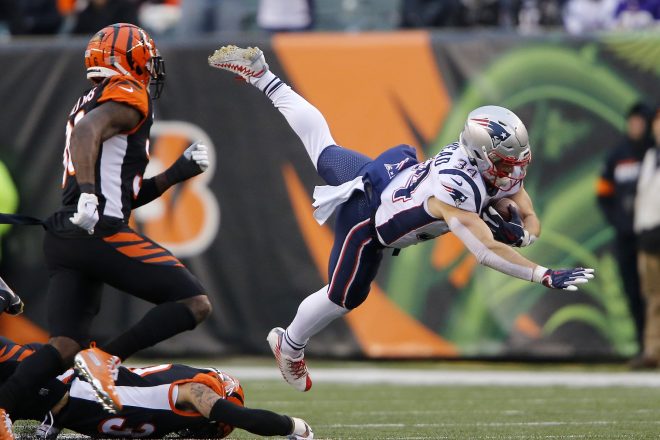 With training camp underway, here’s my roster projection of who I believe will ultimately make the cut:

Given Newton’s recent injury history and the dearth of quality NFL backup QBs, keeping Hoyer around is a wise move.

I have Michel not ready and starting the season on PUP while recovering from foot surgery.  This is a big opportunity for Damien Harris to show what he has to offer.

Only true Fullback on roster.  I expect Keene will line up in the backfield also.

I expect much better play from this group than they received last year.  Byrd and Thomas provide deep threats.  Thomas is the KO returner.  Another year a UDFA makes the 53 man roster.  I like the tall receivers because Newton has a tendency to throw the ball high.

With LaCosse opting out, the Pats will go with two draft picks and a an UDFA .  No experience at all.  Look for waiver wire pick up here!

Cannon was going to battle Cajuste for the starting position.  I keep Cunningham in case Cajuste can’t perform.  Cajuste is a complete unknown of whether he can play or not.  Wodward is the backup OC, Herron I wouldn’t cut and expose him to waivers unless its to sign another OT.

I would rather of seen a veteran DT signed for that 4th DT spot.

Bowers makes the team because he already has NFL experience.  Look for Jennings to start.

The loss of Hightower coupled with the losses in Free Agency is devastating.  They go from one of the top defensive units to mediocre.  Uche and Bentley start with Copeland and Calhoun working some at DE.  Mulai is ST ace and Harris is a run stopper in the Elandon Roberts role.

Best CB group in the league.  They will be counted on to get the defense off the field.

Phillips jumps in for Chung, with Dugger eventually taking over the position.  Bethel and Davis  are ST aces.  Look for Jojuan Williams to play some S also.  I think Davis can play some S where Bethel is ST only.

Not much has been said about Rohrwasser’s kicking ability.  I hope the pool reporters that will be attending preseason practices report on his progress.

The first four veteran Patriots players on the Opt Out list are all 30 or older.  They may have played their last games for the Patriots.

Steve Levy, Brian Griese and Louis Riddick are the three man crew.  Levy is a clear and concise play by play man.  I am amazed that some team has not made Riddick a GM or Player Personnel Director yet.  His insight will be valuable.  Not sure how Griese will fit in.  Lets see how he is used on the broadcasts.

How Was This Article?
Posted Under: 2020 Patriots Training Camp
Tags: Patriots Roster Projection