4 years ago at 9:56 pm ET
Follow @IanLogue
Posted Under: Uncategorized 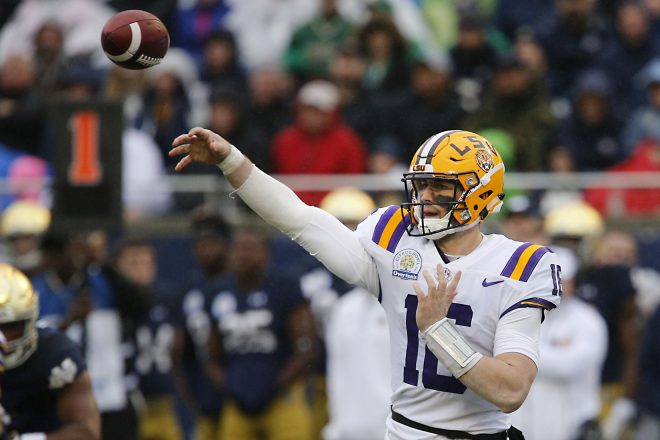 With the 2018 NFL Draft now in the books, it was an interesting weekend and here are some news and notes as we begin this week.

Patriots Didn’t Try and Force a QB, But Set Themselves Up Well in 2019 – The obvious focus this week centered on who the Patriots would target at the quarterback position and it was pretty clear that whoever they may have felt confident in was long-gone by the time they made their first pick at #23.  Despite the reported interest in Lamar Jackson, they passed on him twice which essentially proves they obviously either had doubts or really felt better about the selections of both Isaiah Wynn (23rd overall) and Sony Michel (31st overall).

From there, they stayed true to their normal approach, seemingly going with the guys they felt were the best available and fit with their system, while trading out of other positions where whoever they wanted either wasn’t available, or they didn’t feel there was enough value to make a pick.

They did eventually select a quarterback, taking their shot in the 7th round on LSU’s Danny Etling, who likely wasn’t their first choice, but someone they felt was smart with the football and a player they could work with.

“Here’s a guy, a Purdue transfer, went down to LSU and the thing about him – he played for Coach [Cam] Cameron in kind of a pro-style offense. He had some experience,” Caserio told reporters Saturday night. “The one thing he didn’t do – he didn’t turn the ball over. You look at his career production and this guy didn’t turn the ball over. I think it was 16-2 this year, a low percentage.”

“He takes care of the ball, smart, pretty accurate thrower. There’s some good qualities and traits that we think we can work with and develop.”

So as it stands right now, they’ll head into this season with Brian Hoyer again as the back-up while they try and develop Etling.  If it works out, it’s a win for a team who did their homework and smartly didn’t force a selection, despite a massive amount of criticism from those out there still frustrated with the team’s decision to trade Jimmy Garoppolo.  If it doesn’t, Belichick built up plenty of currency to try again next year with one 1st-round pick, two 2nd-round picks, potentially three third-round picks (depending on compensatory picks), a fourth-round pick, a fifth-round pick, a sixth-round pick (again, depending on the compensatory formula) and three seventh round picks (one depends on a compensatory selection).

Hopefully, it doesn’t come to that and you never know.  No one imagined a sixth-round pick like Brady becoming who he was and Etling’s road has forced him to earn what he’s gotten after getting benched at Purdue and battling his way into the starting role at LSU after transferring and starting over on the scout team.  The Patriots will need him to continue putting in the same effort he put in at LSU that got him to where he is now, which if McDaniels can pull off the same success he’s seemingly had developing quarterbacks in recent years, could see Etling surprise some people down the road.  As a result, it should be interesting to watch. 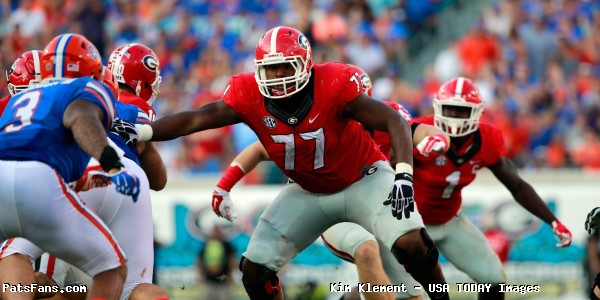 Wynn was among the first of New England’s draft picks in 2018. (USA TODAY Images)

New England walked away with an interesting group this year – Now that we have the luxury of being able to look back at how the draft played out, this year’s crop of draft picks is a nice mix that addresses some needs on both sides of the football.

While not ideal, it’s not a bad group and having looked at the backstories surrounding these players, there’s reason enough to believe that most of them seem to have the attributes that will make them good additions to this football team.

Looking back on New England’s selections last year, despite having just four picks, it’s hard to look at any of them at this point and believe they weren’t good selections, save for injury issues that hampered them being productive.

Last year’s group included Derek Rivers (3rd Round), Antonio Garcia (3rd Round), Deatrich Wise (Round 4) and Conor McDermott (Round 6).  Rivers tore his ACL during what had been a promising preseason, while blood clots in his lung sidelined Garcia, who had also looked promising after being drafted.  McDermott impressed enough where the Bills signed him off New England’s practice squad, playing for Buffalo in three games last season and will reportedly get an opportunity to compete for an opening after Richie Incognito recently making the decision to retire.

Going back one year further in 2016, New England’s entire class worked out fairly well, with most of them becoming fairly productive players. Here’s a look back at that list:

Cyrus Jones remains the one player who could go either way after problems in the return game plagued him and any shot at redemption last season were wiped away when he suffered a knee injury in the preseason finale against the Giants.

But aside from that, it wasn’t a bad draft class.  Thuney’s been solid on the offensive line, Brissett became a pretty good back-up for the Colts, albeit he’s not truly starter-ready yet but was thrown into the fire there.  Valentine has done a good job when he’s been out there, while Mitchell had a terrific first season but missed last year while recovering from injuries.  Grugier-Hill was claimed off of waivers and snatched away by Philadelphia and was productive, including playing in 80% of the Eagles’ special teams snaps during their win over New England in the Super Bowl.

Elandon Roberts has shown flashes and done reasonably well for a 6th round pick, while Karras has done a good job as well as a similar selection on New England’s offensive line.  Lucien actually developed well and was simply victim to a deep receiving group, and he moved on after receiving an injury settlement from the team last season.  He spent time on three different practice squads last season, including Indianapolis, Kansas City and Houston before ending up with Tampa Bay.  He signed a futures contract with them in January.

But they’ve done a good job the last two years in getting the most out of their picks and it’s resulted in a Super Bowl win and two AFC Championships.  Hopefully, this year’s group also ends up being just as productive for them. 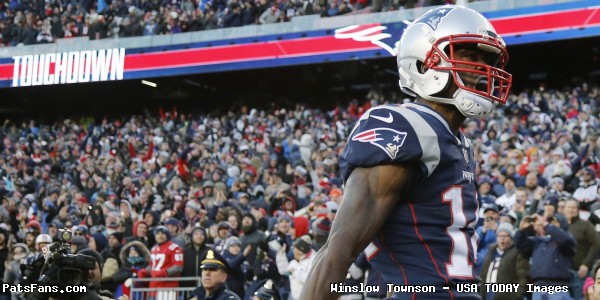 Cooks became the Rams #23 pick in 2018 after their trade with the Patriots.

Rams Lamented The Absence of Their First Pick – But Reminded Everyone Where It Went – The Rams found themselves in a similar position in 2018 that the Patriots were in at this time last year, without a first-round pick because they spent it on acquiring wide receiver Brandon Cooks.

For the Patriots, it was a fact that was mentioned because despite not having a first round selection, they were pleased with the quality of player they had in Cooks, feeling that since first-round picks aren’t always a guarantee, taking the chance on spending it on an established player made the most sense.

It’s a fact that’s hard to argue.  Cooks went out there last season and hauled in 65 receptions for 1082 yards and 7 touchdowns while averaging 16.6 yards per reception, good for 7th highest in the NFL.  But where he struggled was in doing all the things Tom Brady needed him to, especially when it came to the shorter precision routes, which became a noticeable issue thanks to injuries where Cooks couldn’t pick up the slack when guys like Julian Edelman went down and then later when Chris Hogan got banged up.  Cooks finished 2017 with a dismal 7-of-26 (27%) catching the football when targeted on third down, proving that as explosive as he is, he’s not yet a complete player, or at least not in this offense.

As a result, when the Rams approached Bill Belichick with a similar offer to when he took Cooks away from New Orleans (although, that trade also cost New England a 3rd rounder), with Julian Edelman and Malcolm Mitchell hopefully returning this season, Belichick opted to take his chances on recouping a first-round pick and moved on.

For the Rams, when the 23rd pick came up on Thursday night, they reminded everyone where their pick went after ESPN’s Alden Gonzalez reported that the Rams played highlights of Cooks in the war room, with GM Les Snead saying “There were some oohs and aahs”.

Knowing how New England felt last year without a first-round pick, it was interesting to see the irony in the situation given it involved the same player.  For the Patriots, the bigger question will be figuring out a way to replace Cooks’ production.  Part of that equation will involve how healthy Edelman is in his return from a torn ACL and Mitchell’s own recovery.  So far, the news has been encouraging so we’ll have to see how both of them look when the hit the field in July.  Needless to say, keep your fingers crossed.

ODDS AND ENDS: According to all the reports, the Patriots brought in the following undrafted free agents: CB A.J. Moore, TE Shane Wimann, P Corey Bojorquez, DT John Atkins, CB J.C. Jackson, DE Trent Harris, WR Chris Lacy, RB Ralph Webb, DT Frank HerronP Corey Bojorquez and P Ryan Anderson, so that’s the group of longshots who will be fighting to surprise everyone and earn a roster spot. It adds another element that should be fun to keep an eye on, although as we’ve seen over the years, it’s likely subject to change between now and training camp…Newcomer Trent Brown brings with him quite a bit of respect after the team acquired him Saturday from the 49ers in a trade.   Broncos defensive end Von Miller holds him in high regard and had some serious praise for him last year.  “He’s the best right tackle in the National Football League,” Miller said in August 2017 via the Boston Herald. “And he may even be a top-five tackle, period, in the National Football League. There’s not another tackle who’s that tall, that big and can move the way he moves.”… Ben Volin of the Boston Globe mentioned in his Sunday Notes that he disagrees with the team’s trade of their 2018 second-rounder (#51) to the Bears for a 2018 fourth-round pick (#105) and a 2019 second-rounder (TBD) and noted that usually when a team trades a pick for a future pick, it’s a round ahead of the current pick traded.  Volin went through every draft from 2013-18, and found that “sure enough”, 11 of the 12 trades that involved a future pick were always one round higher, with the Patriots-Bears trade as the one exception.  It’s an interesting bit of information, although I’m not sure it really means anything.  Either way, there’s a chart listing the trades he’s comparing them against this one for anyone interested.