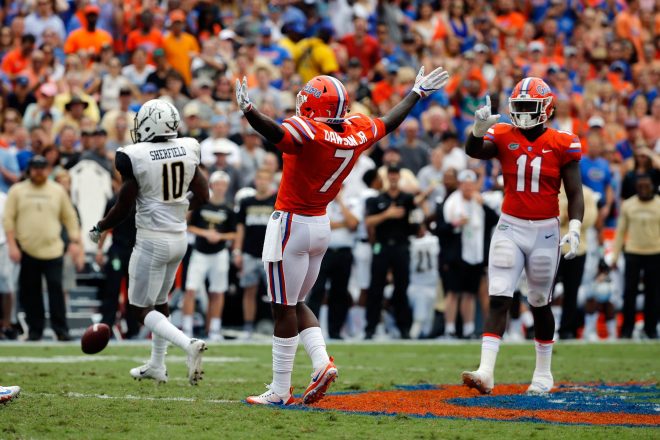 When it came time for New England to make their first pick of the night Friday night, they traded out of the 43rd overall spot, with Belichick reaching a deal with the Lions in exchange for Detroit’s 51st pick and the 117th overall selection.  The latter pick gave them a fourth-round pick, which they didn’t have at that point in this draft.

When the time came again to pick at 51, New England made yet another trade, trading back with the Bears in exchange for a 2019 second round pick and selection 105 overall in this year’s draft.  That gave them yet another 4th round pick (105th overall).

But the Patriots jumped up from 63rd overall to the 56th spot after making a deal with the Buccaneers by giving up pick 63 and one of their fourth-round picks at 117 to take Florida defensive back Duke Dawson, which ended up being their final pick of the evening.

The addition of Dawson is intriguing, with the former Gators standout giving them some help in the secondary which ended up being one of their biggest weaknesses back in February against Philadelphia.   He’s 5’11”, 197 pounds and he’s fast, having run a 4.46 40-yard dash at the NFL Scouting Combine.  He’s also proven he’s a versatile player, excelling when Florida moved him outside last season, which gives Bill Belichick someone he can move around in New England’s defense.

Dawson finished his collegiate career at Florida with 82 tackles and six interceptions, including three he returned for touchdowns.  He also had 23 pass breakups in 48 games.  One other interesting note is the fact that Dawson could have come out in last year’s draft but instead opted to remain for his senior season, earning first-team All-SEC honors.

According to BostonSportsJournal.com’s Mike Lokyo, Dawson was the only cornerback known to have visited Foxboro and the Patriots brass was “all over him”.

Gator fans likely won’t recognize him after the veteran cut his signature long hair that was notable during his time in college, with Dawson saying at the end of last season he was headed to the next level and needed to act the part.

“I’m going into the real world now,” Dawson told the Miami Herald back in late November. “I’m about to become an adult. I have to have a clean look.”

Welcome to New England, Mr. Dawson, where this is definitely as real as it gets.