5 years ago at 9:00 am ET
Follow @IanLogue
Posted Under: Daily Patriots Notebook

We’re back at it on this Monday, and here’s a look at today’s top stories.

Amendola Reveals Injury – It’s no secret that Danny Amendola has taken a little bit of heat over the years for his injury history, but Mike Reiss of ESPN found out something recently that shows you Amendola’s never been above gutting it out when he’s been hurt.

Reiss recently spoke with Amendola, who revealed that during the team’s championship run in 2016, Amendola suffered an injured ankle against the Rams on December 4, 2016 and missed the rest of the season before returning to the playoffs.  According to Reiss, Amendola showed him a scar on his ankle that revealed that the veteran receiver had a broken bone that required surgery yet he pushed himself to get back in time for the postseason just a month later.

Amendola finished the playoffs with 10 catches for 90 yards that year, eight of which came against the Falcons in the Super Bowl, including a touchdown.

He also said that he didn’t plan on leaving New England, but in the end, it just came down to the fact the offer he got from Miami was too good to turn down.

“I came in with an open mind. I understand Bill [Belichick] runs a tight ship, and he hasn’t been known to pay his players, really. I understood that I gave money back to him so I could play for him and play for my teammates and fulfill my side of the contract, and at the end of the day, I had faith that he was going to give me an opportunity to stay,” said Amendola.

“When free agency broke, I came to the realization that he wasn’t going to really come close to any of the other offers I had,” he said. “I had to make a decision for my family and go down to Miami and continue my career there.”

Amendola admitted he’ll miss being a Patriot and he said that while Bill Belichick is tough to play for, it’s simply because he tries to make guys better football players.

“It’s not easy, that’s for sure. He’s an a–h— sometimes. There were a lot of things I didn’t like about playing for him, but I must say, the things I didn’t like were all in regards to getting the team better, and I respected him,” said Amendola. “I didn’t like practicing in the snow, I didn’t like practicing in the rain, but that was going to make us a better football team and that was going to make me a better football player. It wasn’t easy, and he’d be the first to admit, at the [Super Bowl] ring ceremony, that it wasn’t easy playing for him. The silver lining was that we were at the ring ceremony.” 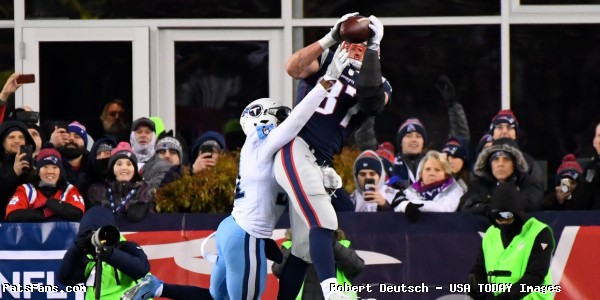 Gronkowski will not be on hand at the start of offseason workouts.

Gronkowski Skipping Start of Offseason Program –  The Boston Herald reported on Sunday that Rob Gronkowski will be skipping the start of the team’s offseason program, with the tight end reportedly still weighing his options and pondering his future.

However, according to Karen Guregian of the Herald, there has been some communication between the Patriots and Gronkowski’s camp recently, with discussions focused on the tight end’s contract.  He currently still has two years and $17 million left on his deal, likely signaling that the team would like to extend him and lower his salary cap number.

Gronkowski finished the 2017 season with 69 catches for 1084 yards and eight touchdowns.  He also had 16 receptions in the postseason for 218 yards and three touchdowns.

The veteran tight end has reportedly been working out at the TB12 center and getting into shape, with Robert Kraft telling The Athletic recently that he’s not worried about Gronk’s future, having seen him at the stadium this offseason and he’s been impressed by the work he’s been putting in.

It’s not even an issue for me,” said Kraft. “I was impressed that he was coming [to Gillette this offseason] and doing whatever he had to do to make himself feel right and get his body right.” said Kraft.

Harrison Hanging it Up – For anyone hoping James Harrison might be returning to the Patriots in 2018, it sounds like he’s actually done with football in general.

The veteran linebacker announced on social media that he’s walking away from football to spend more time with his family, saying “I’m done.”

I've missed way too much for way too long…and I'm done.
Many thanks to my family, coaches, the… https://t.co/Ej5TCj2P3r

Harrison appeared in the final three regular season games of the 2017 season and was active for all three postseason games, finishing the playoffs with a combined 8 tackles and 3 quarterback hits.

I've missed way too much for way too long…and I'm done. Many thanks to my family, coaches, the fans, and everyone who played a role in my football life. #2ndAndFinalRetirement #HarrisonFamilyValues #BlessedAndHighlyFavored #GodsPlan 🙏🏾

The veteran linebacker included photos of his kids in an Instagram post, showing you where his heart now lies as he moves on to life after football.

Schedule Coming? – One interesting note is this is the week the 2018 NFL Schedule will likely be announced, which sets up the road the Patriots will have to travel in their quest to get to Atlanta next February.

As Mike Reiss points out, the team’s opponents are as follows:

Based on how the league normally handles it, Thursday night should be when the full calendar of games are revealed.  So we’ll likely find out by then who New England will open up against, along with how it will all play out.

Bedard on Recent Podcast – Boston Sports Journal owner and columnist Greg Bedard joined us for a video podcast last week that was released this morning.  He spoke with the guys about a variety of topics, including his thoughts on the draft, free agency, and had some interesting thoughts on the Patriots potentially being in the mix for Dez Bryant.  It was recorded last Wednesday and it took a bit to put together, but you can watch it below.

Oh, and one last thing: