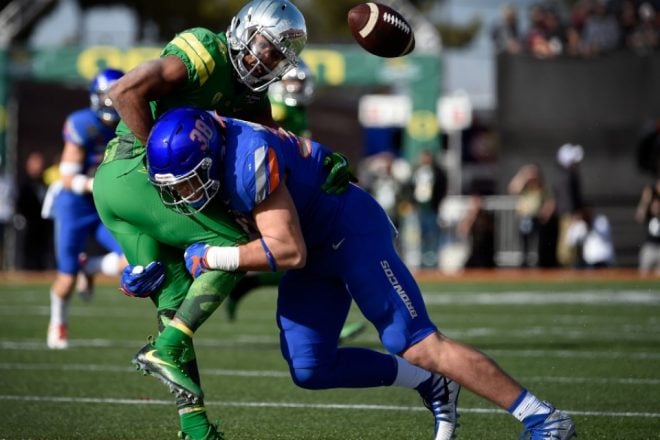 The Patriots really need more depth and a dose of athleticism and speed at the Linebacker position. They were thin at the beginning of the 2017 season and injuries to key players set them back to where it became a glaring weakness in the Super Bowl loss.

We wrote that the team needs a big dose of speed and athleticism at the linebacker position. Earlier we profiled Rashaan Evans from the Crimson Tide, one of those newer breeds of NFL linebackers, a bit smaller than previous players but incredibly athletic and very fast.

We felt like to nab Evans, the Patriots are going to have to move up in the draft, well this guy is not going to be any different. He’s another player that, if they’re interested, they will no doubt have to trade up to draft him, but we feel is well-worth the price.

Leighton Vander Esch from Boise State, is, in our opinion a tremendous fit for the Patriots defense. Bill Belichick has traditionally liked his linebackers big, (see Hightower, Dont’a) for an example. Evans who we profiled earlier isn’t that kind of player. Vander Esch is. Despite being much bigger than the majority of inside linebackers slotted to go early in the draft, Vander Esch is another sideline-to-sideline player who can change direction easily and is very good in coverage.

While he’s not as blistering fast as some players at the position, running a 4.65 in the 40 for a guy who is 6’4, 256 pounds is pretty darned fast. He ran an excellent 6.88 in the all-important 3-Cone Drill which is an excellent tool for measuring quickness and the ability to change direction.

Vander Esch had another year of eligibility left but decided to forego his redshirt senior season and enter the draft, despite some pundits calling for him to have one more go at the college game. But many of those same pundits are now calling that he’ll be drafted in Round 1 in April.

He didn’t wait to do what he already knew. He was told that in the NFL, that he’d have to put some weight and strength on to be effective at the next level Many have him listed at 240, that was the weight he played at in Boise State. But prior to the NFL Combine, he gained 16 pounds and came in at 256. And he still moved as smoothly in coverage during the drills and covered a lot of ground. That shows maturity and the mindset to put the work in.

– Tremendous agility and change of direction

– Tough, physical and a sure tackler

– Smooth in pass coverage, especially for a big man

– Only a full-time starter for one season

Vander Esch despite being much bigger than Roberts will supplant him in the Patriots middle of the defense and become a Day 1 starter. He can move well and cover much better and won’t be a liability with tight ends and backs that they have right now.

Yes, after limiting his role a bit and allowing him to get a bit stronger in the weight room, they can expand his role more in Year 2 and allow him to use his speed to blitz up the A-Gaps a little bit more

With David Harris gone and Elandon Roberts a liability in coverage, he should move ahead of Roberts on the depth chart early.

Very good, he can be an immediate contributor on the coverage units due to his athleticism and size.

Conclusion:
NFL.com’s Lance Zeirlein in his profile wrote about his potential and talent. “Vander Esch might benefit from a reduced role his rookie season while he improves his play strength and becomes more skilled at taking on blocks. He’s an every-down linebacker with very good starting potential and the talent to fill up a stat sheet.”

He is a 1st round talent with still some rough edges to work thru. He is prone to occasionally over pursuing the ball carriers and he will have to work on his play strength when taking on some of the bigger inside blockers in the running game.

But with a large frame that he can still grow into, he’s got a good motor, excellent football I.Q. and has the ability to be a stalwart in the middle of the defense. He’d be an excellent fit with the Patriots defense and fills an immediate need. With him inside it will give the Patriots a big, linebacker that can roam from sideline to sideline and offer good coverage to the backs and tight ends. That will allow Hightower to remain on the outside with Van Noy and possibly Derek Rivers.

However, like Evans, the chances of Vander Esch being around at #31 are slim. Reportedly the Steelers have a big interest in him and are picking at #28. If the Patriots do indeed covet him, they’ll probably have to move up in the draft to select him.

Vander Esch has a nice highlight reel tape from Devo Highlight Productions and can be seen here: