5 years ago at 8:37 am ET
Follow @IanLogue
Posted Under: Daily Patriots Notebook

We’ll keep this one a little shorter today as we close in on the weekend.

Patriots Part Ways With Bennett – It appears that anyone who may have been hoping to see tight end Martellus Bennett back on the field for the Patriots in 2018 won’t get their wish.

The team opted not to pick up his option and the veteran will hit the free agent market, with the Patriots deciding not to absorb the $6.2 million cap hit he would have cost as an expensive insurance policy for Rob Gronkowski, despite the fact that uncertainty remains surrounding Gronk’s future.

Bennett had success in his one full season in New England, catching 55 passes for 701 yards and seven touchdowns in 2016, including a team-leading 5 red zone touchdowns during the Patriots second championship in three seasons.

After departing to Green Bay in free agency last offseason, Bennett landed back in New England after the Packers waived him and the Patriots claimed him.  The timing was perfect because Bennett’s arrival coincided with the injury suffered by receiver Chris Hogan, helping the Patriots get through a tough back-to-back road trip against both the Broncos and Raiders.

But it didn’t last long.  Bennett lasted for just those two games, playing 7-of-70 snaps against the Broncos while catching 3 passes for 38 yards, followed by 17-of-60 snaps against the Raiders a week later with 3 more receptions for 15-yards.

Overall, Brady was a perfect 6-of-6 for 53-yards targeting him.

With Bennett now out of the picture and Gronkowski pondering his future, the Patriots potentially head into 2018 with Jacob Hollister and Dwayne Allen for players who had any significant playing time in 2017.  If Gronkowski truly decides he’s done, one would most definitely have to believe most definitely address that position in the coming months.

Patriots were apparently in on Michael Bennett deal, but lost – The defense was obviously the story by the time the Patriots season came to an end last month, but it seems like they tried to make a move to address it heading into 2018.

According to the NFL Network’s Ian Rapoport, the Patriots came to the table after terms of the trade between the Seahawks and Eagles for Bennett’s brother, Seattle defensive end Michael Bennett, were made and the two sides came to an agreement.  New England was reportedly set to make a better offer than the Eagles, but Seattle opted to stay the course.

The deal between Seattle and Philadelphia saw Bennett go to the Eagles along with a seventh-round pick in exchange for a fifth-round selection and receiver Marcus Johnson, but the Patriots were reportedly willing to part with a third and a fifth for Bennett.  Still, the Seahawks turned them down and made the deal.

According to ESPN’s Dianna Russini, it was a competitive group trying to acquire Bennett, with Cleveland, Tampa and Atlanta among teams in the mix.

As we’ve seen in past years, there will probably be a couple of surprise moves coming and this is a team that really only needs a few key additions given the nucleus they have on defense.   Now we’ll just have to see who they try to bring into the mix. 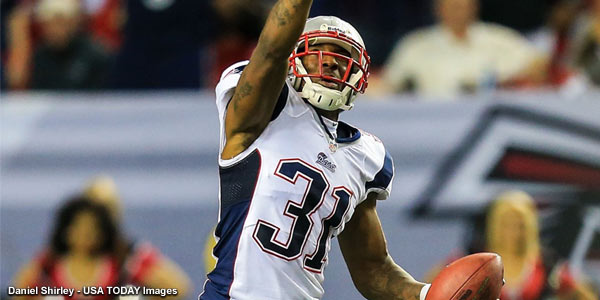 A Talib Reunion? – Defensive back Aqib Talib arrived in New England from Tampa Bay via a trade in 2012 as a troubled player who seemingly needed a change of scenery to turn his career around.

It seemed to work.  As a Patriot, Talib was a model citizen and became one of the most respectable players in the secondary after solidifying a group in dire need of a legitimate shut-down corner.  He finished his two seasons with the Patriots with five interceptions and sixteen passes defended before departing to Denver via free agency.

But in Denver, with the apparent restrictions removed, Talib was a bit more boisterous and seemingly less disciplined, including multiple altercations with Michael Crabtree where he ripped the chain off the receiver’s neck, leading to an ejection in the latest altercation back in November.

That’s behavior that would never fly in New England, yet that side of him came out with the Broncos.

Fortunately for Talib, Denver’s dominant defense helped fans look past that and he’s had a solid four-year tenure as a member of the Broncos.  It’s hard to believe it’s been that long, but Talib is now at the end of the deal and according to ESPN’s Dianna Russini,  he’s reportedly hoping the Broncos cut him loose so he can potentially return to the Patriots.

I’m told there had been trade conversations going on between
the Broncos & the 49ers for Aqib Talib. It doesn’t look like it’s going to
get done. Told Talib prefers to be released by Denver so he can chose his next team, his top choice is the New England Patriots per sources

Back in February of 2016, Talib actually credited the Patriots with making himself more of a professional.

“One thing I have to say about that establishment over there: They’re very professional,” Talib said, via ESPN.com. “You go there for one season and your professionalism will go up a plus-2. If you’re at seven, you’ll be a nine.

“That definitely helped my professionalism as far as preparation for the game, how to handle the media, my behavior on the field — everything. I really learned how to be a professional over there. I went there a seven and came out a nine. I’m working on being a 10.”

Given the Patriots potential need at corner and his familiarity with the system, bringing Talib back makes sense.  Provided the money works, it’s a win-win for a team with a need and a player likely looking to re-establish himself with a coach who knows how to deal with him. Pairing him with Gilmore would give them a pretty good tandem, although they still need additional help.

If he plays by the rules and helps get the Patriots back to the Super Bowl, people will forget about the player they saw in Denver.  The bigger question will be whether Talib is willing to settle for a more team-friendly deal since they have other needs to fill.

Talib likely knows that winning fixes anything.  Unfortunately, until Denver makes a decision, Talib will have to wait to see what the Broncos ultimately decide.  According to ESPN, the Broncos appear to be shopping him after failing to consummate a deal with the 49ers.

Flowers Robbed During Hotel Stay – As if losing wasn’t bad enough, defensive end Trey Flowers also found himself as the victim of a robbery after his stay at the JW Marriot at the Mall of America for Super Bowl week.

According to Fox9 in Minnesota, Flowers checked out of the team hotel the day after the loss, but left a gold and diamond Rolex worth a reported $33,000, as well as a gold and diamond necklace worth $30,000 in the safe in his room.

He reportedly contacted the hotel looking for the items, but the staff had no record of them being recovered from his room.

However, surveillance cameras apparently captured the culprit, which turned out to be a security guard, who has since been suspended from his job.

The bad news is at this point, the Rolex and necklace have yet to be recovered.

The security guard was reportedly arrested by police but was released while the investigation continues.

READ NEXT:
ICYMI: Stephon Gilmore Does Question and Answer Session With Fans Over Twitter
Posted Under: Daily Patriots Notebook