5 years ago at 4:59 am ET
Follow @IanLogue
Posted Under: NFL Commentary 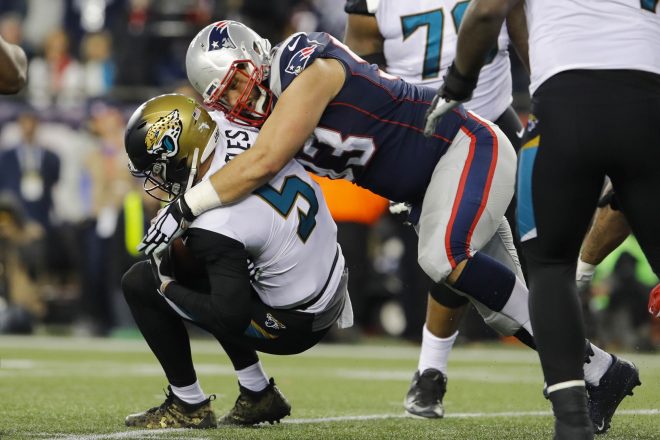 With time winding down in the fourth quarter and the realization of what was about to happen, Jaguars quarterback Blake Bortles stood on the sideline of a chilly Gillette Stadium with tears starting to run down his face as Jacksonville’s incredible run was about to come to an end.

It had probably been a long year for the embattled quarterback, who spent much of the season listening to critics question his future while clamoring for a replacement. There were even whispers at the trade deadline, despite the fact Bortles had been playing well and ultimately finished with one of his best all-around seasons of his career while leading the Jaguars to an AFC South title with a 10-6 record. Now here he was, having beaten the Buffalo Bills in a knock down, drag out battle at home in the Wild Card round, as well as an impressive win over the Steelers in Pittsburgh last week in the Divisional Round to send Jacksonville to Gillette Stadium to face Tom Brady and the Patriots with a shot at going to the Super Bowl.

Just one more win was all he needed. One more victory to quiet everyone and give the Jaguars the opportunity to prove they weren’t a fluke and they deserved to be there.
The reason for Bortles’ tears was obvious. They were so close. And he was brilliant. He missed just two passes in the first half after he put his team up 14-3 and despite some of the pressure the Patriots were able to put on him, he managed to make plays and kept drives going. Better yet, rather than having to settle for field goals, they were putting the ball in the end zone. He threw the first touchdown to tight end Marcedes Lewis to put them up 7-3 after the Patriots opened with a field goal, and Leonard Fournette scored the second touchdown nearly 8-minutes into the second quarter.

That second score by Jacksonville stunned the Gillette crowd, who likely expected their team to roll right through this one. All week they had little fear of Bortles and his football team, despite the fact Jacksonville went into Pittsburgh the week before and put up over 30-points offensively against a pretty tough Steelers defense. But Bortles looked confident, despite the daunting task he faced. After all, beating Tom Brady at home is no easy feat, and the Jaguars knew that it would take a perfect effort in order to pull it off.

There would be no blowout by the home team and the Jaguars took a 14-10 lead into the locker room at the half and had the ball to start the second half. That halftime memory will be one that probably lingers for a while since there was likely plenty of confidence for a group that had held the best quarterback in the game in check. If they could do it for 30 more minutes, their goal was now within reach. 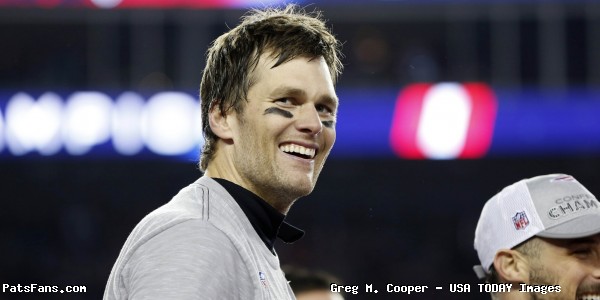 Unfortunately, the outcome didn’t quite meet those expectations but on paper, you would never know it since the stat sheet disagrees with the outcome. Jacksonville’s defense did what they needed to. They helped keep Brady off the field after holding New England’s offense to 3-of-12 on 3rd down (25%) and the offense did their part after holding the football for over 35-minutes. They scored on both trips in the red zone, including two from goal-to-go. They were better on third down (6-of-15 – 40%). They didn’t turn it over, with most fans believing Bortles would crack under pressure. But they don’t know the back-story.

They don’t know about all the yelling and screaming head coach Doug Marrone did during the preseason, ripping Bortles in practice in front of all his teammates each time he took what would have been a sack if his own players were allowed to put a hit on him. They don’t know about Marrone cursing out the guy who had been their leader on offense the year before for holding the ball too long, reprimanding him each time he hesitated after making a read. He got plenty of “tough love” and it was obviously a much different experience than Bortles had under former coach Gus Bradley, who the Jaguars fired last season after the owner apparently finally realized they had way too much talent to be underperforming the way they were.

It was obviously the right move because now they were one game away from the Super Bowl against a team with a quarterback who was looking to go to his eighth with the intent of trying to win his sixth. Standing in his way was Bortles and the Jaguars, and Bortles found himself in a bizarre situation on Sunday where despite playing about as well as he could have hoped, he was up against a guy who was just better. He was up against a player who knows how to do the little things and not make key mental mistakes, like the delay of game penalty that Bortles took which nullified a 3rd-down conversion with just over two minutes left to play that allowed the Patriots to score a touchdown right before the half.

It’s not his fault. Brady edges him out in terms of experience and the “Oh-my-God” throws he made at the end of Sunday’s game were matched only by the same incredible receptions by Danny Amendola, who was just as unreal. This will be one of those games replayed for the ages after what transpired in the final minutes. In New England, it will be one fans will enjoy reliving. In Jacksonville, fans will likely turn the channel.

In the end, Bortles has nothing to be ashamed of. It was a solid effort, and it simply came down to just a few plays that unfortunately for him, were made by a team that unlike Pittsburgh, New England knew how to finish them. When you’ve got the best coach and quarterback of all time, that’s just what happens.

It may be a missed opportunity but the Jaguars proved on Sunday, and during their postseason run, they’re a team on the rise and no longer the laughing stock of the AFC South. This is a talented group that pushed the Patriots to the limit and likely could have even surprised everyone because they were good enough to potentially also beat Philadelphia. That will probably be what bothers Bortles and the team the most as they’re forced to watch that final game play out. Fans here in New England know what that was like during the 2001 season, and the similarities between the two teams are certainly there.

For now, they’ll likely look back on this game as a learning experience and something to build from. He’s certainly not Brady, but Bortles can take this season and hopefully use it as a springboard toward becoming the quarterback he probably believes he can be.

Great players learn from losses in big games and Brady will likely be the first to admit that. Needless to say, Bortles can wipe the tears away knowing that he was simply just taught a hard lesson by a player who has already been there.

What he does with that knowledge now, is up to him. Brady knows better than anyone how hard it is to get back to this point and unfortunately, after Sunday’s outcome, that’s simply the reality Bortles and the Jaguars are forced to deal with.