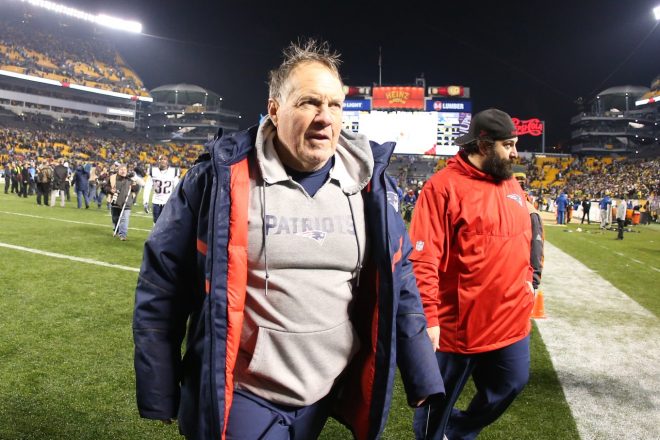 Don’t you just love these Patriots, the team that makes you have to change the rule book now and then.

The NFL’s most infamous play of the 21st century launched the Patriot dynasty, then the rule was eventually repealed and changed. Now, thanks to the Patriot defense not being able to (or wanting to, if you are a cynic) cover a tight end over the middle at the goal line with perhaps the season on the line, the rulebook may be undergoing some changes this offseason. It wasn’t enough with Dez Bryant last year, but since now the Patriots are involved, watch something happen this year.

Let’s first be clear about one thing: the Steelers messed up big time on Sunday night when they opted to go for a fake spike and to win the game. But the play two plays before is what will keep NFL nattering nabobs chatting from now until some change happens. Even Boston media types spoke out against the rule, which won’t appease Steeler Nation, but it does stand for something.

The rule at issue is the definition of a catch, or rather, the completion of a catch. In a perfect world, Pittsburgh tight end Jesse James scores a touchdown with 28 seconds left, Pittsburgh has a 31-27 lead, and Tom Brady might not have enough time to respond with a touchdown the other way. But the NFL is far from perfect, and the application of the rule on finishing a catch swayed the game to the Patriots.

Steeler fans are claiming that it was a catch, much like Raider fans thought Brady fumbled the ball 16 years ago. In the blizzard conditions of the final game in Schaefer/Foxborough Stadium history, Charles Woodson of Oakland came on a corner blitz and hit his former Michigan teammate just as he was throwing the ball forward. Because the ball was not cradled by Brady into his body, the ball was ruled an incomplete pass. Instead of Oakland running out the clock, the Patriots kept the ball, Adam Vinatieri kicked a tying field goal and a winner in overtime, and the Patriot dynasty was born.

Now, you have the James “catch”, which was overturned on replay. It was so hard to see that the CBS announcing crew of Jim Nantz and Tony Romo didn’t realize what was really going on for about 2 minutes. When they finally caught on, the two reacted with great surprise. Steeler players were seemingly unaware, then incredulous, that the play took so much time in replay review. It’s possible that they had no idea what was being looked at.

To the naked eye at full speed, James looked like he scored easily. He lined up on the right side, and ran at ¾ speed to the goal line at the center of the formation. Nobody covered him, which leads to speculation that the Patriots were conceding the touchdown to give Brady more time to respond. James caught the ball and lunged into the end zone.

When it was first learned that the play was being reviewed, one might have thought that James was down before crossing the goal line. Nantz and Romo quickly shot that down, saying that James wasn’t touched, which he wasn’t. So even though the ball had not crossed the plane of the goal when his knee hit the ground, since he wasn’t touched, it’s a good touchdown. (In college and high school, he would be down inside the one-yard line.)

When Nantz and Romo finally realized that they were looking at the catch and not the knee, the two reacted with great surprise. Out of nowhere, Nantz says, “Are they looking at the football possibly, losing control?” Romo reacted with near shock, exclaiming “Oh, that’s what it is, Jim! They don’t think he caught it! Oh, boy!” A few minutes later, referee Tony Corrente said that “the receiver in the end zone did not survive the ground, it’s an incomplete pass!” Nantz and Romo again reacted with near shock. Neither of them disagreed with the call, but neither of them noticed it right away.

To clarify, this rule is about a completed pass/catch. If, say, for example, Le’Veon Bell took a handoff, ran the ball in and hit the ground with the ball being bobbled as he landed, it is a touchdown. Because Bell took a handoff and became a runner instantly, once Bell broke the plane of the goal (if his knee touched down when James’ knee touched, it’s assumed that a Patriot didn’t touch him), the play is over right there and what happens afterward doesn’t matter.

Because James was a receiver and took a pass from Ben Roethlisberger and not a handoff, James needed to finish the catch. He caught the ball and broke the plane of the goal, but the catch wasn’t finished to complete the play and score the touchdown. When James hit the ground with the ball being bobbled, the pass became incomplete. This is why the hot new phrase in NFL parlance is “survive the ground”. Corrente told a pool reporter that this is a phrase that is standard vernacular in officiating. It has now transcended that status.

Bryant was involved in a play like this in a playoff game last year at home against Green Bay. He scored on a long pass play, but as he fell in the end zone, he bobbled the ball while hitting the ground and the pass was ruled incomplete in a game won by the Packers. Corrente refused to comment on that game, but the mention of the Bryant play has come up again now that much the same thing has happened again.

But the James play is drawing a ton of attention. NBC Sports Boston commentators said that Pittsburgh “got screwed”. Some NFL suit named Al Riveron has suddenly become relevant. Joe Starkey of the Pittsburgh Post-Gazette was naturally critical of the rule, but so was Julian Benbow of the Globe. The debate is on, and on a national level.

What will be interesting is if this game becomes the fulcrum of change in this rule. If Bryant’s mishap against Green Bay wasn’t enough, but this game was, one might wonder if the league is out to try and do what it can to bring the Patriots back to the rest of the pack. For a league hell-bent on parity, seeing the Patriots excel at high levels every year has to not sit well with rule maker types around the league. The tuck rule was changed, albeit several years after the fact, so now is this rule next? If the tuck rule had happened against an NFL also-ran, would it have garnered the attention it did?

Lots of teams can complain that the NFL is “out to get them.” Right up there on that list are the Patriots, who have both won five championships and had to withstand two substantial scandals in this century. The Raiders are still complaining about the tuck rule, and some are even still livid over the Immaculate Reception. Saints fans probably think Sean Payton walks on water and that BountyGate was a fabrication. Cowboy fans think they got screwed with the suspension of Ezekiel Elliott.

In the end, the league will figure all this out and get it right. It may not happen in our lifetime, but someday, it should happen.

Better yet, all players should know the rules. The Patriot players do, that is why all these plays happen against the Patriots, not to them.