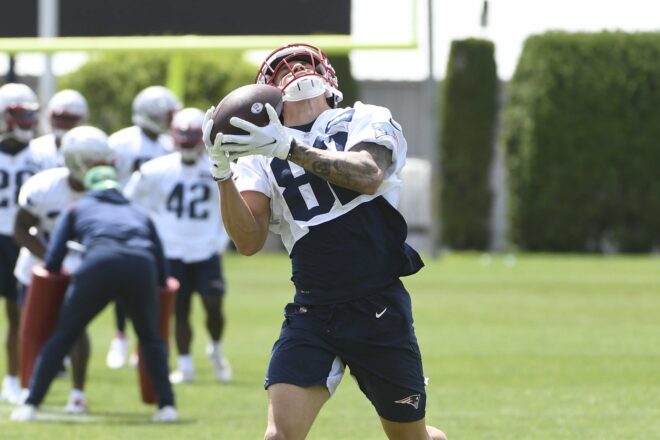 – The New England Patriots officially got rookie cornerback Jack Jones under contract on Thursday, which is a nice way to finish off what was a good week for the former Arizona State standout.  Jones has been as advertised coverage-wise thus far and he built a nice foundation during these OTAs heading into next month’s training camp.

– Jones’ signing still leaves four rookies who have yet to get under contract, with Tyquan Thornton, Pierre Strong Jr., Bailey Zappe, and first-round pick, Cole Strange, all still awaiting getting their deals done.  Due to the CBA, there’s no reason why there should be an issue, so the more likely reason is that the team still has some remaining work to do in order to get their finances straight.  Patriots cap expert Miguel Benzan has the club sitting at just over $295k in cap space, so they’ll need to make a move at some point to get everyone else signed.

– One player who is also currently not under contract is wide receiver Jakobi Meyers, who has yet to sign his restricted free-agent tender with the team.  Meyers, whose agent is Drew Rosenhaus, told the Andrew Callahan of the Boston Herald this week that he’d love to sign an extension but he’s not worried about anything other than the upcoming season at this point.

– During these OTAs, it’s been obvious that changes have been made on offense given the various reports from the recent practices.  Bill Belichick alluded to that fact recently when he talked about the fact things have been streamlined a bit offensively, albeit he didn’t go into much detail.  Quarterback Mac Jones talked about the changes yesterday, saying that the hope is to play faster and hopefully be more successful heading into this season.  “I think the idea for every offense is to have an identity and to be able to play fast and play quicker and put stress on the defense is important for any offense,” said Jones.  “We want to be able to do that consistently and we want to be able to do whatever we want to do at any given time.”

– This was a productive week for Tre Nixon, who caught some big passes from Jones and grabbed some momentum heading into next month.  Jones pointed out that Nixon has been working hard all offseason and that the two already had a good relationship as he used to drive to work with him at times last year.  “Tre, like you said, came in with me.  We used to drive to the facility every day together last year, take our COVID test, and then go to work,” said Jones.  “He’s a grinder.  In the offseason he’s there with all the guys at the throwing sessions, I don’t think he missed a single one.”

– Nixon also got a fair amount of work on special teams and seems like he’s already making a strong case for himself.  As Ernie Adams‘ final draft selection last offseason, he appears like he’s beginning to live up to the expectations despite being just a 7th-round pick.  The Patriots have had success with late-round guys in years past and if this continues, we could see yet another underdog potentially make an impact.  Hopefully, all of it will carry over to training camp next month.

– Jones talked yesterday about the team’s chemistry and the fact they’re it’s his job to try and help put his guys in good situations.  “I think that’s my job is to just distribute the ball to the playmakers,” said Jones.  “I want it to be about them making plays, whether that be the tight ends, running backs or receivers.  At the end of the day, we’re all doing this for each other.”

– After canceling the team’s practice Wednesday due to a downpour, Belichick apparently had seen enough and canceled the remainder of the team’s minicamp and OTA practices.  They won’t take the field again until training camp begins in a little over a month from now.