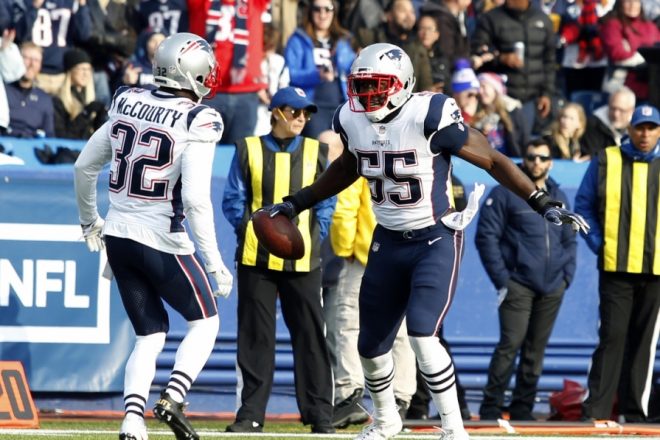 The Patriots took care of business in Buffalo on Sunday afternoon using a running game that gashed the Bills for nearly 200 yards behind Dion Lewis and Rex Burkhead and the defense which held the Bills woeful passing game to just 85 net yards and three points.

Rob Gronkowski had nine catches for 147 yards and was uncoverable. He also committed a stupid, flagrant cheap shot after the whistle in the fourth quarter that will cost him. If he serves his one-game suspension, he’ll probably miss out on the final of his bonus incentives in his contract which will be expensive.

Simply put, the Patriots outplayed and outcoached the Bills again. Brady improved his record to a ridiculous 27-3 against the Bills and the team clinched a virtual tie for the division. Any Buffalo loss or New England win in the next month clinches the division again for the Patriots. Every spring and early summer we hear the “will this be the year that the Patriots are dethroned in the AFC East?” and this season, even after a slow start, it is essentially wrapped up with four games to go.

With the win, they improve to 10-2, and more importantly, they keep the pressure on the Steelers who will have to win against Cincinnati later tonight to keep pace as the top team in the AFC.

Tom Brady wasn’t sharp, especially in the first half but he and the team heated up in the third quarter and they scored on two impressive drives and put this one away early. Brady ended up with pedestrian numbers (for him), 21-30, 258 yards with zero touchdowns and an interception. The pick was the play that Rob Gronkowski was flagged and suspended for and should have been a penalty (two actually) on TreDavious White.

But Brady missed a wide-open Phillip Dorsett on a deep incompletion to Brandin Cooks, which ignited a mini-brouhaha with Josh McDaniels, but he made a couple of really nice throws to Gronkowski. Brady also slides in the pocket and steps up better than anyone in the business. He has the innate ability to feel the rush and when to step up and slide left or right.

The Patriots two-headed monster of Dion Lewis and Rex Burkhead gashed the Bills defense badly. A week after holding the Chiefs to less than 60 yards on the ground, the Patriots ran for nearly 200 yards.

Burkhead ran 12 times for 78 yards with two scores and added three catches for 25 yards in the passing game. Lewis ran 15 times for 92 yards. Each broke a long gainer as the running game and the Bills were powerless to stop them.

James Develin and James White both were pressed into support status this week but each played a role and the Patriots running game is getting better and better each week. White had five carries for 18 yards and four catches for 32 more. Not bad production for the third man in the rotation this week.

The wide receivers this week were a non-factor in the game. Buffalo’s secondary did a great job of bottling them up and taking away the deep chunks and the sideline routes of the wide receivers.

Brandin Cooks had just receptions for 17 yards, Danny Amendola had just two catches for 34 yards. Dorsett wasn’t targeted, however, he was wide open for that big gain where Brady missed him all alone down the left sideline.

Rob Gronkowski once again tortured the Bills defense in Buffalo. He caught fire in the second half and they don’t have anyone that can match up with him. He caught nine passes for 147 yards despite being held and hit downfield on seemingly every snap. But what followed after the pick was inexcusable.

We get that the frustration of seven years is taking its toll on the big guy, but he frankly has to be smarter than that. And while part of the blame has to fall to the referees who let every team clutch and grab Gronkowski on every down, while if he breathes on an opponent an OPI flag is thrown, it doesn’t excuse what he did…at all. Nuff said.

Dwayne Allen had one catch for three yards but has really improved in his run blocking and provided good support in the running game. Jacob Hollister had one target in the passing game and plays a regular role on Special Teams.

The offensive line was missing right tackle Marcus Cannon again as well as swing tackle LaAdrian Waddle and had Cameron Fleming in there this week. Center David Andrews returned this week. The pass protection was a bit iffy this week again. Buffalo, who came in with just 17 sacks, had three on the day and was getting good pressure on Brady.

The running game was clicking again. The Patriots offensive line was winning the battles there and opened up big holes for the backs to exploit. They were getting to the second level and keeping the linebackers off the runners.

It was a mixed bag for the offensive line who gave up a whopping 183 yards to LeSean McCoy, Tyrod Taylor et al. but it seemed every time they needed a big stop they were getting it. McCoy had just 30 yards in the second half. And the Bills ended up with a total of three points in their own building. The pass rush was once again very good, the Patriots were getting a good push from everywhere. Malcom Brown had a really solid day in his return from injury with a sack, a pair of quarterback hits and a couple of run stuffs.

Eric Lee was victimized a little bit early in the running game, but he ended up having a big day, with an interception inside the red zone, 1.5 sacks, 3 QB hits, a tackle for a loss and two passes defensed. His interception was set up with nice pressure from Alan Branch who pushed his man into Taylor, possibly effecting the throw

Kyle Van Noy who injured his calf in the game against Miami, seeming re-aggravated it in the third quarter and didn’t return. He did have a half sack, a QB hit, and a pass defensed. Elandon Roberts and David Harris had some issues in run support this week, as they got washed out on a few of the Bills running plays.  They struggled a bit in pass coverage as well. Harris had some good pass rushes in the interior and had 1.5 sacks and a QB hit.

Stephon Gilmore had an outstanding day again. The Bills tried to attack him in his return to Buffalo this week. It failed miserably. Gilmore blanketed Zay Jones all day. Overall the Patriots secondary was outstanding. Buffalo had just 115 yards passing with a net of 85 and 3.4 yard per pass average. The Bills longest play of the day thru the air was 14 yards. Tyrod Taylor, Nathan Peterman, and Joe Webb were a combined 15 -34 for 115 yards.

The Patriots secondary had their best game of the year. And the good news was that they got Eric Rowe back in the lineup after missing seven weeks with a groin injury. Rowe shook off the rust and had a pass defensed.

There wasn’t a heckuva lot to complain about here. Stephen Gostkowski is on a roll, he kicked all three field goal attempts despite having the wind be a factor in the kicking game. His kickoffs and the resultant excellent coverage by the Special Teams units kept Buffalo deep in their zone all day.

Bill Belichick raked Sean McDermott over the coals in their first AFC East meeting on Sunday afternoon. McDermott didn’t come off remotely ready to challenge the Patriots for the division and when they needed to come up with an answer, they chose the Wildcat. That’s how you’re going to beat Belichick and the Patriots? By running the Wildcat? The team was focused, ready to go and had a good game plan that was effectively put into operation.

Josh McDaniels stayed patient with the running the football, and they took what was there. Matt Patricia’s unit gets high marks on Sunday. Buffalo’s best drive was their first one, and they came away with zero points.Overall very good marks for the Patriots. We’re on to Miami.