5 years ago at 10:22 am ET
Follow @SteveB7SFG
Posted Under: Patriots Commentary 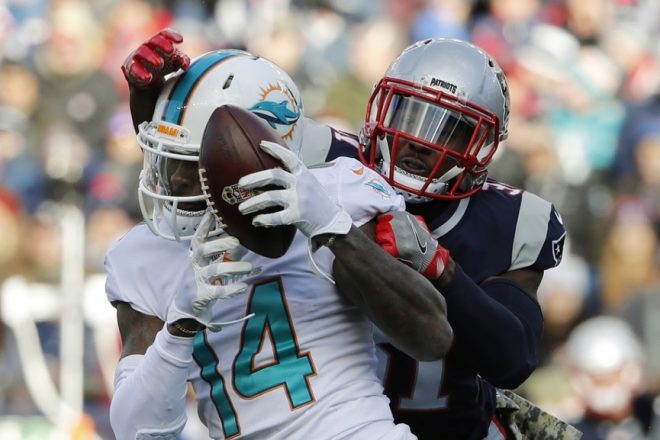 Things have certainly turned around for Bill Belichick and Matt Patricia’s defense since the first month of the season. The constant breakdowns in communication, big plays being hit all over the field and the defense allowing a ton of yards and points now seem a distant memory. And it should. The defense has made remarkable strides in the past seven games, holding opponents to 17 points or less in each one.

There hasn’t been any magical elixir or fairy dust sprinkled on the players, just old-fashioned hard work as the players have put the time in, worked hard and have gotten more comfortable in their respective roles. It has put the team in very good shape heading into the final five games of the regular season.

Run-Defense, Pass Rush Still Issues: To be sure, they are far from perfect. The run defense is giving up far too many yards and could be much better. The pass rush has been very inconsistent, which sounds funny this morning a day after the team notched seven sacks for 61 yards against the Dolphins. But overall this year, opposing quarterbacks have had too much time to survey the field. Against the Dolphins, the Pats took advantage of the situation , in being well ahead and cut the dogs loose.

Malcom Brown returned after missing a few games and he definitely helped in the running game. He, Alan Branch, Lawrence Guy, Adam Butler and Ricky Jean Francois have a good nucleus on the interior.

Trey Flowers led the way with a pair of sacks before injuring his ribs. He returned briefly but then left and went to the locker room for treatment. His situation will bear monitoring as the team is very thin and inexperienced at defensive end. Rookie Eric Lee who was on the roster for just a few days got his first NFL action and played about 20 snaps, and got his first NFL sack as well as a QB hit.

The coaches didn’t put too much on his plate, he was in a rush only situation so Lee was able to go out and play instinctively. He’s a bit bigger than Cassius Marsh so theoretically he should be able to set the edge in the running game. We’ll get a better feel for that in the coming weeks, but for his first NFL action…well done.

Kyle Van Noy had a very solid game as well until he too was injured. Elandon Roberts the past few weeks has been playing the best football of his brief NFL career. He came untouched on an A-Gap blitz and notched a pair of sacks.

Secondary Now Playing The Way it Was Envisioned: While the media is still basing the Patriots secondary off of those awful September numbers, the unit is playing tremendously better and each week has gotten better since Week 4. Malcolm Butler has shaken off the shaky early season play where his contract situation was affecting his play and is back to his normally solid self at left corner. Butler is relentless, has nice catch-up speed and has a very short memory. He won’t dwell on getting beat on a play and comes back and plays harder for the next snap.

Stephon Gilmore was the poster child for the “Belichick made a mistake signing him” group after struggling the first few weeks. Gilmore was one of the worst offenders in the communication gaffes in the first month of the season. However, all of that has changed. Starting in Week 5 he did a very solid job of shadowing Tampa’s Mike Evans. But he suffered a concussion that week and then missed the next three games. Since returning, he’s been the shutdown corner that everyone envisioned they were getting this spring. Besides shutting down DeVante Parker on Sunday, Gilmore had a huge interception at the end of the first half. And nearly had another on the Dolphins final play of the day.

Jonathan Jones has flourished in his increased workload since Eric Rowe suffered what has to have been a very serious groin injury and missed the past seven games. The safeties, Devin McCourty, Pat Chung and Duron Harmon have been excellent this season.

If you still think the pass defense is suspect, take a look at the numbers opposing quarterbacks have put up against them in the past five weeks. While it is a given that they’re not facing a murderers row, the fact is, Matt Ryan, Philip Rivers, and Derek Carr are far from slouches either. In the last five games Opposing QBs have the following.

Points per game – 13.1: Those are some pretty impressive numbers and this is what we expected to see this summer when training camp opened.

Injuries Need Monitoring: As we mentioned at the top, the win over the Dolphins almost has a feeling of a Pyrrhic victory to it. The Patriots suffered six injuries and at least one, to Nate Ebner is expected to be of the season-ending type.

The ones to Trey Flowers and Kyle Van Noy will be the ones to monitor closely as the team really can’t afford to lose either one. But Trevor Reilly and Marquis Flowers are not only standout special teams performers, like Ebner, but have been getting increasing amounts of snaps on defense as well.

With the next three games away from home, divisional games against Buffalo and in Miami before visiting Pittsburgh, the Patriots can wrap up the division and a first round bye with continued solid play. The offense has found its groove and now the defense is playing well too. That’s what the coaches want to see at this time of the year.

There is still work to do and they can definitely improve in a few areas but overall, this unit is playing very good football right now.

We’re on to Buffalo…