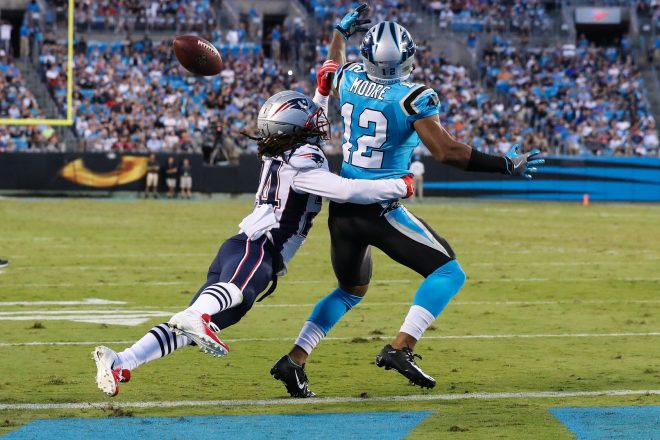 The New England Patriots entered Thursday nights preseason matchup with the Carolina Panthers for the final “dress rehearsal” before the opening of the 2018 regular season.

Before the game, it was reported that quarterback Tom Brady was expected to play “extensively” and into the second half.

Tom Brady is expected to play extensively in tonight's game vs the Panthers. It should give him more opportunity to get familiar with his WR corps.

One handed catching practice for @Edelman11 in #Carolina #WBZ pic.twitter.com/Qyc97bmm0P

📹 Tom Brady chatting with Bill and Steve Belichick on the field after the #Patriots arrive for preseason game 3 vs Panthers – kickoff at 7:30pm on #WBZ pic.twitter.com/zKD6CCyRIN

📹 Julian @Edelman11 jumping for joy that preseason game 3 is tonight.#Patriots vs Panthers at 7:30pm on #WBZ pic.twitter.com/qAu9Fn7KCc

In the first quarter, the Patriots offense struggled to find the red zone on their few drives, but the defense made big plays and held the Panthers to two Graham Gano field goals.

How could I forget Adam Butler. On the one hand, this is ridiculous hand strength and technique on the shoulder slap move. But again, they get aggressive with Butler's interior pressure combined with a LB/DE stunt and lose contain. #Patriots pic.twitter.com/BsCyt8Nysj

Stephon Gilmore with a nice pass breakup on the goal line covering DJ Moore on 3rd down #Patriots #NEvsCAR pic.twitter.com/wxLAqf4koi

Get yourself a fullback who does it all. @James_Develin: Pro Bowl fullback & kick return specialist. #NEvsCAR pic.twitter.com/wq6Zed78Co

#Patriots film: Boy, this was great by Eric Rowe. pic.twitter.com/diBU35Wxfq

In the second, wide receiver Julian Edelman showed of his recovery progress as he returned to his old ways of being clutch on third down.

In what could be a sign of things to come in 2018, Brady connected with Phillp Dorsett following an audible at the line.

Phillip Dorsett getting involved early showing off his speed. Brady calling the audible for Dorsett and he makes the play pic.twitter.com/FZPZ9IcmbV

The drive led to the Patriots first points of the game, a 27-yard field goal by Stephen Gostkowski.

Unfortunately despite Brady’s solid first half, the team was unable to get much going in the red zone and found themselves down a pair of field goals heading into halftime at 9-3.

It’s 9-3 here at halftime. I’ve got a full seat, but I really only need the edge.

As the second half opened, things got a little weird for returner Cyrus Jones, who’s jersey looked like some Spider-Man webbing.

The Panthers meanwhile, extended their lead to eleven following a 7 play 50 yard drive capped off by a Taylor Heinicke one yard run.

Gano would tack on a 47 yard field goal to up the score to 18-3 after three. The Patriots offense remained silent.

In the fourth, the Panthers broke it open when backup quarterback Garrett Gilbert found Mose Frazier for a six yard touchdown. 25-3 Panthers.

With just three minutes remaining in the game, the Patriots delt with another injury situation as running back Jeremy Hill limped off the field following this play.

Hill appeared to be okay in the locker room after the game.

Noooooo 🙁 Jeremy Hill limping off the field after he was brought down with a horse collar tackle. I hope he is ok. I’ve been rooting for him to make the roster ever since the #Patriots signed him this spring pic.twitter.com/usmvBW0t3B

Here’s the Jeremy Hill injury. He underwent ankle surgery in the offseason. pic.twitter.com/KCiCmfIGmv

Jeremy Hill, who was shaken up late in the game, said he’s “good.” Didn’t appear to be limping in the locker room.

With the game winding down, the Patriots finally found the end zone on a Mike Gillislee two yard run, he would then convert the two point conversion.

25-14 Panthers and that would be how it would end.

The Patriots conclude the 2018 preseason with a trip to the Meadowlands to take on the New York Giants next Thursday night at 7pm.

Tom Brady to Luke Kuechly: “You did great out there!”

Gronk tries to leave the podium after 1 question. I love this man #Patriots pic.twitter.com/0DTbKN4CbU

Belichick: We weren't able to accomplish much tonight. We didn't really play well in all 3 phases of the game.

Reporter: What were some specific things you thought you did well tonight?

By: Ian Logue
Some quick New England Patriots news and notes on this Wednesday.
12 hours ago

By: Ian Logue
Here's what Bill Belichick had to say during his weekly appearance on WEEI's The Greg Hill Show on this Monday morning.
3 days ago