6 years ago at 7:12 am ET
Follow @SteveB7SFG
Posted Under: Patriots Commentary

The Regular Season Begins, And Now it Counts

The Patriots have transitioned from the preseason to the regular season mode and conducted their first regular season practice of the year on Sunday at Foxboro. True to form, two key players were missing, TE Rob Gronkowski and LB Barkevious Mingo, although Mingo was available to the media earlier in the day in the locker room. It was also the first practice without Tom Brady present as he began his 4-game suspension on Saturday afternoon. Danny Amendola took part in his first practice of the year, as he was activated off of the PUP List. 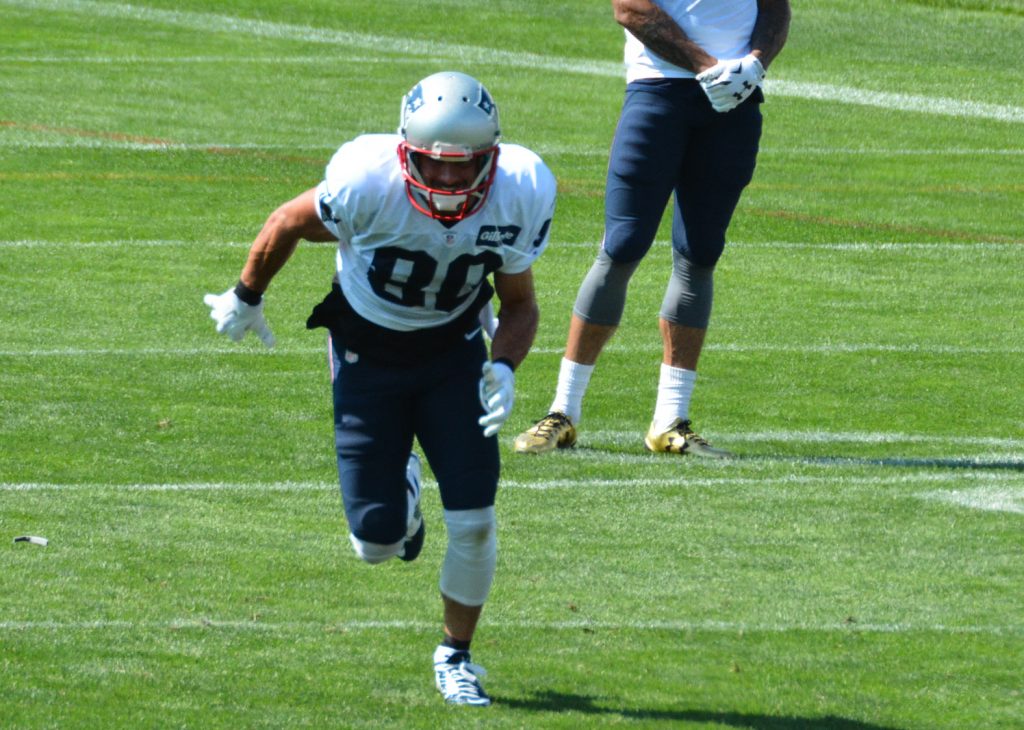 Danny Amendola was activated off of the PUP List on Sunday

The Patriots filled the first eight slots on the team’s practice squad on Sunday. Adam Schefter of ESPN announced that former Titans RB Bishop Sankey was signing with the Pats practice squad. He was a victim of the numbers game with the Titans as they’ve brought in DeMarco Murray and Derrick Henry this spring.

The versatile Sankey adds to the depth of the Patriots running back position and can carry the ball as well as catch it out of the backfield. He’ll have time to earn his way onto the active roster.

The team had hoped to retain CBs Cre’Von LeBlanc, Darryl Roberts, and LB Kamu Grugier-Hill after releasing them from the active roster on Saturday. But LeBlanc was claimed by the Bears, Roberts by the Jets and KG by the Eagles.

The team now turns its attention and focus towards the Arizona Cardinals. The Patriots have already announced that they’ll leave a day earlier, on Friday this week before the Sunday night game.

Bill Belichick and the coaching staff will have to get the team prepared and the game plan ready a bit earlier, however, there’s little doubt that they’ve been preparing behind the scenes for this game for a while.

We’ll have a complete breakdown of the game later in the week, but here are a few teasers leading into this week’s game:

With the injury to free agent signing Mike Jenkins (torn ACL), the CB spot opposite Patrick Peterson has been wide open. They moved rookie 3rd-round draft pick Brandon Williams into the spot. But he’s a converted running back and struggled. While they have high hopes he’ll develop in time, the Cards went out and traded for Chiefs CB Marcus Cooper. Cooper has seen his play fall off for the past couple of years and the team is hoping a fresh start will do the trick.

Former Patriot Chandler Jones has impressed in Arizona thus far. Playing as an OLB in the Cardinals 3-4 scheme, they’ve left him on the right side opposite Calais Campbell which will be an area for the Patriots offensive line, in this case, Nate Solder and Joe Thuney to handle.

Both WR Larry Fitzgerald and S Tyrann Mathieu are expected to play on Sunday. Fitzgerald has been dealing with a slight MCL sprain and until recently was the target of offseason rumors to the Patriots every spring.

Mathieu suffered a torn ACL last year and is said to be close to 100 percent. The versatile and athletic “Honey Badger”  was missed in Arizona’s playoff run a year ago.